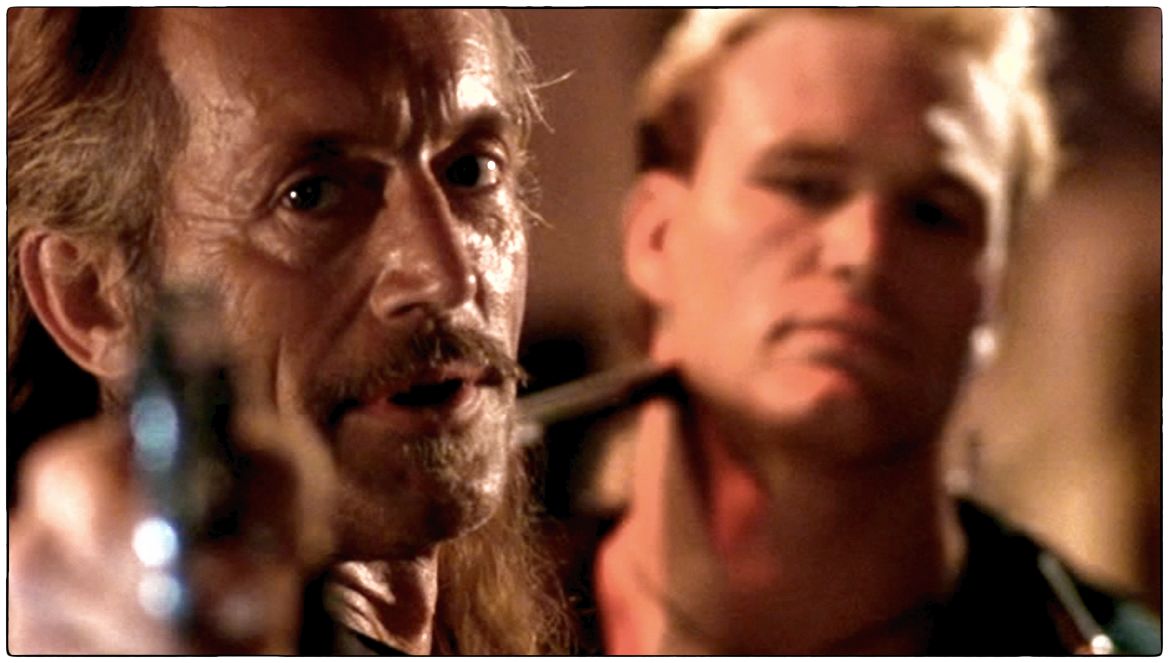 So instead of writing some crazy shit dealing with the current world affairs I figure it’s my job to talk about other things in this world that are the exact opposite. So obviously it’s gonna be movies or more specifically a movie. But my friends, not just any movie. No, a movie that was suppose to turn another sports athlete into an action hero of the cinema but sadly did not. No, this big budget 1991 movie would go on to become something far more special. It would reach the level of “cult classic” in so many ways years. So let’s dive into the 1991 film STONE COLD.

For those of you movie nerds that did not follow sports or the NFL in the 80s Brian Bosworth was a complete beast on the field. The most wanted player of his time he signed with the Seattle Seahawks and had a punishing career of kicking ass as a line backer until shoulder injuries slowed him down as a player to a halt in 1989. Also he had the unfortunate statement that he would be the man to stop and contain one Bo Jackson. That did not work well for him.

Bosworth talked the talk but Bo Jackson destroyed him in one of the most famous head to head plays in NFL history in that era and it hurt his badass reputation. But after one retires from sports in the late 80s/ early 90s and carries a large persona like Bosworth did the action film industry seemed like the next step.

The 80s were winding down but the obsession with over the top bad ass Hollywood action cinema was a thing that audiences like myself were still begging for. So why not give the people more of they wanted? To take a serious character like Brian “The Boz” Bozworth and try to make him into an action hero on the big screen seemed like a no brainer. In today’s world it has done wonders for guys like Dwayne “The Rock” Johnston. So here we were with a role of a lifetime to start the Boz’s career. Did I mention he was gonna play an undercover cop digging deep into a neo-nazi biker gang who made the Sons Of Anaracheys look like complete wimps? All the time doing it with one of the greatest mullets ever filmed on 35mm print?

After the original director bowed out Craig R. Baxley took over the reins of this beauty of action genius that would be Stone Cold starring The Boz. Baxley was no stranger to badass action flicks of the era as he was the man behind other cult action classics such as ACTION JACKSON and DARK ANGEL aka I COME IN PEACE!

Written by the late Walter Doniger the script seemed like the perfect for a new actor like Boz to star in. Playing a tough Alabama cop named Joe Huff who was under suspension from his own force because he was simply too bad ass to play by the rules the FBI gives him a deal to get his shit together (aka blackmail him) and force him to go undercover as biker rebel John Stone to get in good with the crazy politician killing biker gang “The Brotherhood” led by Chains Cooper played brilliantly by the always amazing Lance Henriksen.

After geting one of the lower ranking members of the gang to have his back Joe is able to get close and see the gang’s operations in all the 90s action cliche style and let me say…this biker gang is fucking insane. Shooting beer cans off each others shoulders and heads with automatic weapons and heavy drugs and drinking you wonder what Motorhead music video you might be watching but you are not. You are witnessing a slice of gold in the action genre that will stay with you for years to come. Trust me.

All would seem to going well for John Stone as his work getting close to Chains is looking good except for the amazing supporting role of one William Forsythe. For those of you that love cinema the name of William Forsythe means insane character acting quality. The man is a legend in helping weak actors in a medicore script simply by being there. This film is no exception and he is truly one of the reasons this film works. He plays the second in command of the gang as “ICE” and his beyond over the top acting for this role works on every level. You see, he never likes or trusts this new “biker” John Stone for a second. He completely sees through his bullshit and can smell an undercover all the way.

Now as the story goes on the amount of high budget explostions, death, nudity, swearing, and crazy badass fist fights hits over and over again. Can Joe stop the The Brotherhood’s plan over evil while trying to save some misguided members from this life while rocking the greatest hairstyle of 1991 ever? In the end the answer is Yes but does any of that matter and are we surprised? The answer is NO.

Look, what makes this movie get better and better over time is simply every movie action trope we grew up with during the 80s and 90s slapped in it but honestly taking it to a level where even I was shocked. Basically this film has the plot and break down of a straight to video exploitation film from the 70s but somehow got the budget of a big Hollywood flick at that time blow some serious shit up.

Another thing that makes this film a blast to watch is simply how rough Bosworth’s acting is. Infact if you witness the film closely enough you will notice most scenes with him and Lance Hendiksen talking even if the “Boz” is talking the camera will cut back to Lance because his reaction facial expressions are still 100 times better to watch than Bosworth delivering his lines. Yup, it’s that’s painful but that awesome at the same time.

It is very rare in the movie world when you can combine a big budget, a bad actor in the lead, brilliant character actors in the villain and supporting roles, and batshit crazy violence and stunts together and somehow make it work.

The reality is STONE COLD came out a little too late for this type of film. It was meant to be a mid 80s flick to run beside such gems as COBRA and COMMANDO. I’m not saying Bosworth had the chops of Stallone and Arnold but by the early 90s people were getting bored of the over the top jacked up action hero. Too bad, I feel with a few more movies and acting classes The Boz could have been up there but here we are 29 years and I’m typing about the movie.

I guess all I’m saying is after a long night and not being able to sleep I wanted to write about something that was fun, mindless, and made you smile with a “this is crazy” feeling that can take your mind off of the real world and all the problems that seem to keep dumping on us right now. Don’t ask me why but for some reason Brian Bosworth’s STONE COLD came to mind and I hope you seek this bad boy out and share it with your movie nerd friends. They will love you forever!

Did I mention there is an insane helicopter scene at the climax and it involved no CGI at all? All real stunts. All real choppers! Worth it alone.

Once again dear friends…thanks for reading the ramblings of a videostore guy and I hope you will, like me, continue to seek out the best of trashy kick ass cinema while keep on living in this crazy world. Much luv!

Halloween Movie Releases For The Shop!

Well, it is rather fitting that this week's new releases are hitting the shop on Halloween as along as the shipment comes...