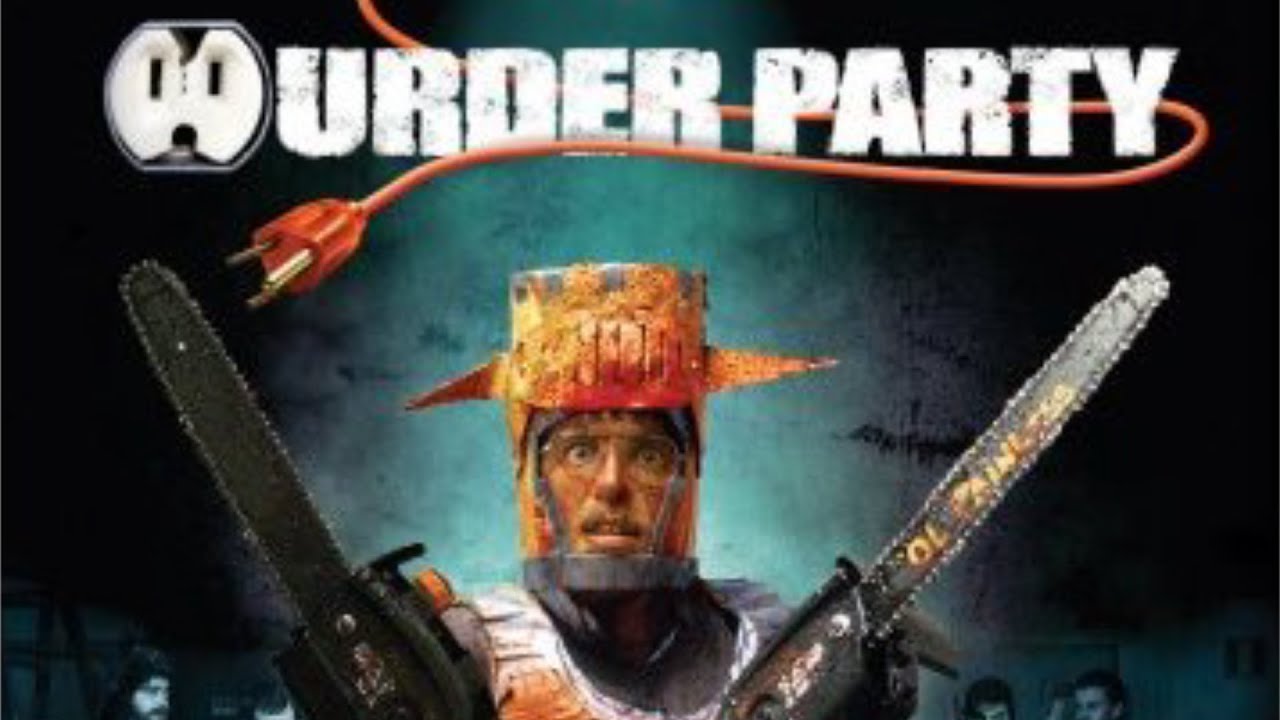 As the magic month continues towards the 31st I sit in the shop thinking about the not so obvious choices to watch on Halloween. Some movies in the last 10-15 years have come out celebrating the season and are now annual viewing givens for movie nerds. Then there are other movies that came and sadly never picked up the cult standing they rightfully deserve. Today I wanna remind people of one of those films. 2007’s MURDER PARTY.

Before Jeremy Saunier hit it big with films such as Blue Ruin and Green Room. Before he went on to direct Hold The Dark and work on episodes of True Detective he made his feature debut with the indie film Murder Party. This little gem hit my shop over 12 years ago and at the time I was excited to watch it the moment I received it due to the buzz it got from publications such as Fangoria and Rue Morgue. I was not sure what to expect. Would it be a horror movie? Would it be a comedy? Would it just be surreal? Well, it was all of the above and taking place on Halloween just added so much.

So it’s Halloween night and we meet our “hero” Chris. Now Chris is what we call a lonely man. His job is that of a parking ticket meter guy, a job that does not make you beloved by most of society to begin with. We see him finishing another depressing day of work as he walks home when luck would have it and an envelope happens to float right into his feet. On this printed paper is a simple invitation to a “murder party” with the address included. As Chris thinks about it sitting at home alone with his cat he has a choice, stay home and watch horror movies with his fur baby or take a chance, make a quick costume out of cardboard, go to this mystery address, and assume it will be a fun Halloween party and a great way to make new friends? Well the choice is obvious and off he goes.

How this costume made for the film never picked up a life of it’s own is beyond me. It is cardboard art at it’s best and that early shot of Chris just sitting on the subway on his way to the party always visually cracks me up.

So Chris gets to the address, knocks on the door, walks in, and is immediately taken down waking up tied to a chair and being looked at by a very interesting group of people all dressed for the occasion as well. Right away I knew I was gonna love this film judging by the customes people were wearing. The two stand outs being a character dressed as Pris from Bladerunner and another dressed as a Baseball Furie from The Warriors. Yup, I’m a pushover when it comes to nerdy stuff like that.

So we soon discover that Chris has literally walked into a real Murder Party with him being the guest of honour. Basically all these people have gathered to come up with the most creative way in the name of art of how to brutally kill Chris. The deal is that whoever comes up with the winning idea has been promised a sum of money from the ecentric artist Alexander. They are all simply surprised that someone would be dumb enough to find the invite and actually show up. This is always the problem with lonely people. They are desperate to change that feeling regardless of how unknown and dangerous something might end up being.

As the events continue to unfold the internal bickering between the possible killers begins to grow. As poor Chris continues to be tied to a chair he witnesses the insane madness happen starting with an accidental death of one of characters due to a food allergy and an old piece of machinery. The blame starts getting thrown around as the group wants everything to be worked out before Alexander shows up to make his decision on who the big winner will be.

What happens over the next hour is mix of jealousy over costumes, fire, chainsaws, blood, laugh out WTF moments, truth serum needles, and poor Chris just trying to make it out alive.

By the end of the film you will realize that there are worse things out there than being lonely and maybe it is just better to relax at home, pet your cat, and watch a good horror movie on your own.

Now the movie is an incredible effort for Saulnier and company as their first feature. With a very limited budget you can tell it’s an everyone chip in and do your part to get this film made. The climax at a close by Halloween party is simply bonkers and I can only hope everyone involved in the making of the film had a great time. And even though I have talked to people who have seen and really enjoyed it when it’s brought up in conversation I find it’s soon forgotten about again. To me this is a shame. We are always looking for fun genre flicks to watch around Halloween that actually deal with Halloween. Well, this is one. And it’s never too late to recommend an older movie to your friends or loved ones to help it possibbly get that cult following as time goes on.

If you have seen Blue Ruin and Green Room but not this one you might be surprised it’s from the same filmmaker as those two. The tone is completely different but it has a charm of it’s own. And I can not recommend this film enough for the month of October. Again this is one man’s opinion and that’s all it is. I’m no critic, I just like when a movie works for me and if no one else is gonna talk about it I might as well since I basically live in a video store everyday. Also when a movie’s tagline is “EVERYBODY DIES” how can you not watch it?

As always thanks for reading and continue to enjoy this amazing month of goodness with some fun and sweet cinema. And who knows, maybe one day I’ll see someone dressed as a cardboard knight on the streets? Cheers from the videostore!

This Week A Bunch Of Cool Stuff Hits The Shop. True Story.

Movies That Inspire Life…Thoughts On 5-25-77

It's that magical or cynical time of the year again as we are close to the latest STAR WARS film and final...