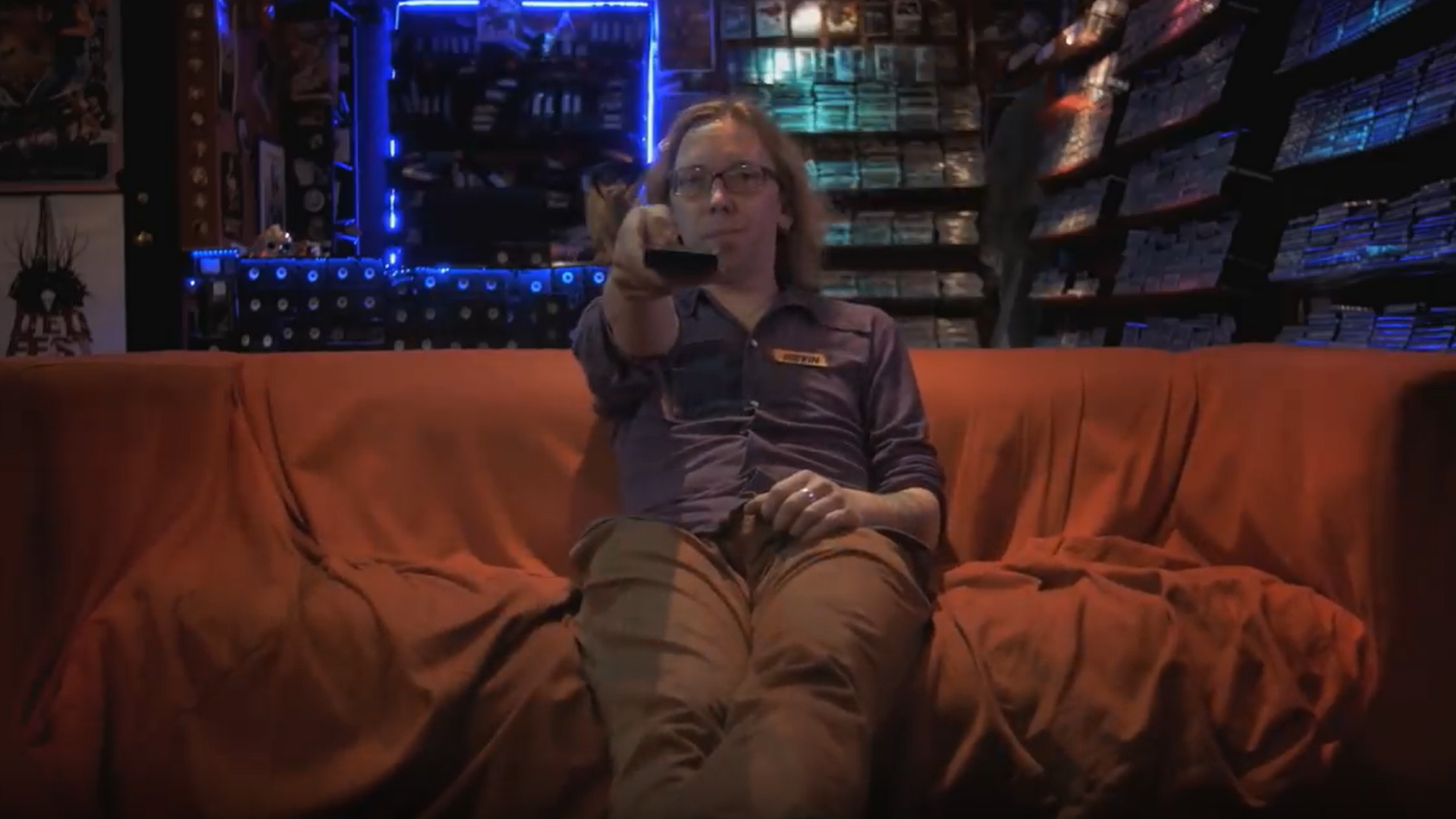 A locally produced ad for an anachronistic movie rental shop on Whyte was so well done it’s officially world-premiering at South by Southwest in Austin on the weekend.

The Video Store Commercial is a madcap and style-hopping short film filmed downstairs at Kevin Martin’s The Lobby DVD Shop (10815 82 Ave.), starring the long-haired, longtime business owner in a fictional narrative where he’s attempting to make a promotional video to attract more customers — the real-life reason for shooting the footage in the first place.

But in the fictionalized narrative, a clumsy crew member knocks over a display rack and steps on a one-of-a-kind videotape made by a former cult leader, “who was trying to make the cultiest cult film of all time,” and ultimately transported his very soul into the VHS tape.

Cody Kennedy and Tim Rutherford co-directed the four-minute short, having worked with Martin many times over the years, including on 2013’s The Last Video Store in the same setting — but with a different, paranoid fantasy-horror plot. This successfully made the rounds of the genre film fests, including Montreal’s Fantasia fest.

You can (and should) watch it online at the National Screen Institute.

The team also created a web series funded by Telus, Straight to Video: The B-Movie Odyssey, which hopped through genres, again, hilariously, starring Martin the video store owner transported from one campy film scenario to the next.

The filmmakers had hoped to follow up with a feature film but, failing to get funding, moved on to other projects — Kennedy as a cinematic artist at BioWare, for example.

But, Kennedy notes, “Last year Kevin was like, ‘Can you guys help me make a commercial for my store?’”

Martin explains, “But us being us, we could not film a simple easy one, and crazy shit always happens in the shop.”

Back to Kennedy: “Well, we thought, maybe we could take this opportunity to make a short film about making a commercial in the video store, so that’s kind of how that spawned.”

“Well, long story short,” adds Martin, “the guys kept tweaking it and decided to try and submit it to the film festivals.”

They got word it was playing Southby in January. Martin admits with a laugh, “Now I was kind of bummed because I wanted to have it online to actually, you know, promote the video store …”

Initial shooting took only a day, though the filmmakers weren’t pleased with how their original supernatural antagonist looked — just a guy under a sheet. What they replaced it with is phenomenal, a glowing-eyed husk of unspooled videotape with creepy, murderous tendrils.

Kennedy also notes there’s a subtle jab at the trendy use of VHS footage often used as a stylistic choice lately — in their film, where the supernatural menace is only visible through a camera, “there’s a reason for it instead of it just being a tacked-on style.

“We really wanted to do something different.”

From the cult director pouring his soul into his project to the narrative need for VHS footage to an unspoken reminder of how disposable film and media is in 2019 — how when we have near infinite access to content we no longer seem to value it — the film is much deeper than it need be. But this is why it’s so charming, down to the nostalgia of seeing an actual, functioning video rental store.

The film is confirmed for at least five festivals so far, and we’ll be the first to let you know when it screens here.

“Hopefully this will get us one step closer to our goal of the feature film version of The Last Video Store as we just submitted a grant package for Telefilm, which we hopefully will find out about this summer,” says Martin, who’s also co-founder of Edmonton’s annual DEDfest.

In the meantime, he hopes people drop by his shop, ad or no, because you never know what might pop out at you in the dimly-lit basement full of a million independent dreams and nightmares.

Another Week Of Thrills and Spills Coming To The Videostore…

Another week of sexy cinema comes crashing into the shop and it's a little bit of everything dear friends. So let's get...

Coming This Week…back in stock! A personal guilty pleasure favorite!

Another Week and More Cinema To Enlighten Your Movie Minds…

The year keeps on rolling and so do the fine movies of physical cinema. Another batch of classics, reissues, new stuff, and...