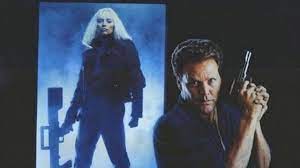 With Halloween ending there is always a certain letdown seeing the magical season leave us but here at the old videostore we never let that bother us because through these dusty shelves lie more great genre films to keep that spirit alive and well. This week a nice mixed bag of goodies come crashing into the shop and I hope you are as excited as the store is to recieve them. Let’s take a look shall we…

BACK IN STOCK! Mike Enslin (John Cusack) is a successful author who enjoys worldwide acclaim debunking supernatural phenomena — before he checks into the Dolphin Hotel, that is. Ignoring the warnings of the hotel manager (Samuel L. Jackson), he learns the meaning of real terror when he spends the night in a reputedly haunted room.

Swedish low budget horror involving an old school building that is serving as a home for an alien goddess. Andreas Marawell, 2022.

Second part of legendary Japanese crime epic ‘The Yakuza Papers’ a demobilized kamikaze pilot is released from prison, his suicidal impulses put to good use as a hitman, his instability and recklessness proving a dangerous liability. Kinji Fukasaku (1973)

In the land of Prydain, lowly pig herder Taran (Grant Bardsley) dreams of becoming a gallant knight. Young Taran receives his heroic calling when the evil Horned King (John Hurt) kidnaps Hen-Wren, a prophesying pig that had been entrusted to Taran. Now, with help from his furry sidekick Gurgi and Princess Eilonwy, Taran must locate the magical black cauldron before the Horned King is able to use its mystical powers to summon an army of the undead.

Inspired by real events, this tense adventure thriller casts Charles Bronson as a tough mercenary pilot hired to fly into Mexico on a rescue mission – only to discover the real plan is to break a wealthy convict from a notorious prison. Tom Gries, 1975.

BACK IN STOCK! The Blu Ray 2 Pack of both sequels to Stuart Gordon’s Re-Animator.

BACK IN STOCK! A privileged man-child arrives at the beautiful and remote coastal cabin of his estranged father, whom he hasn’t seen in 30 years. He quickly discovers that not only is his dad a jerk, he also has a shady past that is rushing to catch up with him

BACK IN STOCK! The terrifying and tiny menaces are out in full force with this four-film collection packed with enough Special Features to make any fan’s mouth water!

BACK IN STOCK! Aussie cult horror set in the near future, where a teenage couple is trapped in a drive-in theatre which has become a concentration camp for social outcasts gorging on drugs, exploitation films, junk food, and new wave music. Brian Trenchard-Smith (1986)

BACK IN STOCK! Two teenage boys unwittingly summon an ancient evil entity, known as The Blind One, by delving into black magic while trying to escape their mundane lives.

DePalma’s take on the giallo follows a fashionable Manhattan therapist faced with a murderous puzzle: the sudden, hideous slaying of one of his patients with a straight razor stolen from his office. Michael Caine, Angie Dickinson, Nancy Allen, 1980.

BACK IN STOCK! After a serial killer murders his twin brother, a young man infiltrates a fraternity where his brother lived.

BACK IN STOCK! The Bob Hope of bosomy camp horror comedy! Set in Victorian times, Elvira & her maid end-up spending the night at an old creepy castle when they hitch a ride with a local. Written by John Paragon. Richard O’Brien, Mary Scheer, 2001.

BACK IN STOCK! When an interdimensional rupture unravels reality, an unlikely hero must channel her newfound powers to fight bizarre and bewildering dangers from the multiverse as the fate of the world hangs in the balance.

Fall is a 2022 survival thriller film directed and co-written by Scott Mann. Starring Grace Caroline Currey, Virginia Gardner, Mason Gooding, and Jeffrey Dean Morgan, the film follows two women who climb a 2,000-foot tall radio tower and get stranded at the top with no way down.

BACK IN STOCK! A cop who loses his partner in a shoot-out with gun smugglers goes on a mission to catch them. In order to get closer to the leaders of the ring he joins forces with an undercover cop who’s working as a gangster hitman. They use all means of excessive force to find them.

BACK IN STOCK! While transporting a car from Chicago to San Diego, Jim Halsey (C. Thomas Howell) picks up a hitchhiker named John Ryder (Rutger Hauer), who claims to be a serial killer. After a daring escape, Jim hopes to never see Ryder again. But when he witnesses the hitchhiker murdering an entire family, Jim pursues Ryder with the help of truck-stop waitress Nash (Jennifer Jason Leigh), pitting the rivals against each other in a deadly series of car chases and brutal murders.

Armed with an arsenal from Hell, a motorcycle riding vigilante hunts down a cop’s killers one by one.

A drug dealer turns into a zombie after his body is dumped in toxic waters by six teenagers. In order to put a halt to his killing spree, the youngsters decide to dump another body. This good zombie is supposed to defeat the evil one.

Deeply unsettling Norwegian horror about a group of children who develop extraordinary psychic abilities which begin to corrupt them. Eskil Vogt, 2021.

Based on a story by acclaimed writer Theodore Sturgeon, the ridiculous story of a construction crew who battle a bulldozer. Clint Walker, Robert Urich, Carl Betz, Neville Brand, 1974

With Christmas approaching, the Allies are in high spirits. Van Helsing considers taking his relationship with Princess Kali to the next level, but from the depths of hell, the wicked Lord of Darkness summons the demon spirit of Christmas.

BACK IN STOCK! Legendarily tasteless cult Shot-on-Video horror that features a killer who, upon being diagnosed with AIDS, proceeds to get revenge on the world by attacking people with needles filled with his blood. Drew Godderis, 1994.

A sexy ex-cop turned bounty hunter goes after a gang led by a psychotic artist and drug dealer who killed her partner and kidnapped an L.A. mayoral candidate. Sybil Danning, Wings Hauser, Worth Keeter, 1989.

BACK IN STOCK! Indonesian action/horror insanity! A sexually rapacious Asian undersea goddess possesses the body of a young female skin diver and then goes on murderous & sexual rampage! Jalil Jackson, 1989.

BACK IN STOCK! Horror-Comedy about a man-eating crocodile loose in the lake. Written by David E. Kelley. Bridget Fonda, Bill Pullman, Oliver Platt, 1999.

BACK IN STOCK! American underground new wave masterpiece where invisible aliens in a tiny flying saucer come to Earth looking for heroin. They land on top of a New York apartment and find that absorbing humans during orgasm is better then heroin. Slava Tsukerman (1982)

BACK IN STOCK! A teenager’s quest to launch Norwegian Black Metal in Oslo in the early 1990s results in a very violent outcome. Jonas Åkerlund (2018)

BACK IN STOCK! Years after the collapse of civilization, the tyrannical Immortan Joe enslaves apocalypse survivors inside the desert fortress the Citadel. When the warrior Imperator Furiosa (Charlize Theron) leads the despot’s five wives in a daring escape, she forges an alliance with Max Rockatansky (Tom Hardy), a loner and former captive. Fortified in the massive, armored truck the War Rig, they try to outrun the ruthless warlord and his henchmen in a deadly high-speed chase through the Wasteland.

BACK IN STOCK! Iconic horror based on Steven King’s novel, after a famous author is rescued from a car crash by a fan of his novels, he comes to realize that the care he is receiving is only the beginning of a nightmare of captivity and abuse. Rob Reiner (1990)

Two siblings running a horse ranch in California discover something wonderful and sinister in the skies above, while the owner of an adjacent theme park tries to profit from the mysterious, otherworldly phenomenon.

Surreal vampire / sex fantasy about a rich brat, who stumbles upon a secret society which conducts secret & perverse ceremonies in a mansion rented by his father. Jean Rollin, 1970.

The complete PLAGA ZOMBIE TRILOGY, a masterpiece of outsider moviemaking and the Titanic of homemade zombie movies, is now presented together for the first time ever, remastered and upscaled to HD!

After Anna (Isabelle Adjani) reveals to her husband, Mark (Sam Neill), that she is having an affair, she leaves him and their son. Mark is devastated, and seeks out Heinrich (Heinz Bennent), the man who cuckolded him, only to receive a beating. After a series of violent confrontations between Mark and Anna, Mark hires a private investigator to follow her. Anna descends into madness, and it’s soon clear that she is hiding a much bigger secret — one that is both inexplicable and shocking.

BACK IN STOCK! John Carpenter’s horror film about a research team who find a mysterious cylinder in a deserted church which may contain the DEVIL! Donald Pleasence, Jameson Parker, Victor Wong, Alice Cooper, 1987.

The remarkable career of the movie industry’s most admired and influential special-effects auteur, the legendary Ray Harryhausen, is the subject of Gilles Penso’s definitive documentary Ray Harryhausen: Special Effects Titan.

In this tense Austrian sci fi, survivors of an environmental catastrophe battle to save Planet Earth from a space station. Magdalena Lauritsch, 2022.

After learning that a stranger has been accidentally killed near their rural homes, four Oregon boys decide to go see the body. On the way, Gordie Lachance (Wil Wheaton), Vern Tessio (Jerry O’Connell), Chris Chambers (River Phoenix) and Teddy Duchamp (Corey Feldman) encounter a mean junk man and a marsh full of leeches, as they also learn more about one another and their very different home lives. Just a lark at first, the boys’ adventure evolves into a defining event in their lives.

BACK IN STOCK! Penelope Spheeris’ classic study of the Los Angeles punk scene in the early ’80s. D.I., The Vandals, T.S.O.L., The Germs.

BACK IN STOCK! A haunted traveller must protect the mystical keys to the destruction of the universe from a relentless demon known as the Collector. Ernest Dickerson, 1995.

First of legendary Japanese crime epic ‘The Yakuza Papers’ has Shozo emerging from the postwar black markets into the professional world of Yakuza. Gang feuds, assassinations and betrayel propel him from prison, up to crime lord. Kinji Fukasaku (1973)

The first and only feature length documentary about the cult-classic Canadian children’s television series, You Can’t Do That on Television. with more than two dozen cast and crew members!

And there we go guys. A nice start to the month of November. Movies should be here on Thursday as always and let me know which ones you might want. Cheers!

Ahh…the 90s. For all the love looking back at 80s cinema has given us every now and then it's hard not to...

Another Week Of Random Goodness At The Videostore…

Well the world keeps on rolling and movies must brough to the videostore to keep the selection up. Honestly this week's movies...

More Movies Slice Their Way Into The Videostore…

It's a beautiful day outside as I type from the videostore. Let's hope it stays long enough for New Movie Day later...