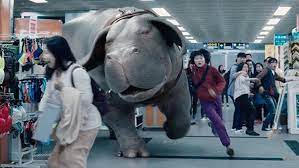 Another Monday, another new movie list. AS I sit here and type with a desperately needed cup of coffee I look at the list and see some serious childhood flashbacks with killer insects haunting my young eyes on that TV in the early 80s…let’s take a look shall we?

A widowed mother is radically tested when her teenage daughter insists a supernatural experience has left her body in service to a higher power. Sienna Guillory, Jessica Alexander, Ruby Stokes, Ruth Paxton, 2021.

Raymond (Roy Jefferson), Junior (Haskell V. Anderson III) and Ned (Le Tari) are three black friends who experience the crucible of war in Vietnam, then return home to their small Southern town where racial prejudice is alive and well. Motivated to change things, the men start a voter registration drive in their community, which angers local whites. Klansmen soon appear, and when the local sheriff is shot dead, all semblance of law and order evaporates.

BACK IN STOCK! Legendary Bruce Campbell and Ossie Davis star as elderly Elvis and geriatric JFK, who end up in the same old age home, but the two must join forces to battle an ancient Egyptian Mummy and save the souls of their fellow residents. Don Coscarelli (2002)

BACK IN STOCK! Korean tale about a disgraced police detective-turned-pimp who becomes involved in a breathless race against time to catch a psychopathic serial killer after one of his girls goes missing. He has just twelve hours to find evidence against the killer, before the bureaucratic Seoul police department are forced to release him to continue his reign of terror.

In this odd comedy from Dusan Makavejev, an American Coca-Cola marketing guru stumbles into the Australian Outback in an effort to increase sales, discovers a local bottler and sets out to buy them out or put them out of business. Eric Roberts,1985.

BACK IN STOCK! A single mother moves into a dilapidated apartment complex and experiences startling visions and sounds, calling her mental well-being into question, and endangering not only her custody of her child, but perhaps their lives as well. Hideo Nakata (2002)

BACK IN STOCK! When a woman learns of an immortality treatment, she sees it as a way to outdo her long-time rival but things don’t go as planned. Meryl Streep, Bruce Willis, Goldie Hawn, Robert Zemeckis, 1992.

BACK IN STOCK! An outcast teenager (AnnaLynne McCord) practices surgical skills and has weird, and increasingly violent, psychosexual fantasies.

BACK IN STOCK! George C. Scott stars in this return to the terrifying saga of demonic possession as s police lieutenant in spiritual crisis tracks a rash of murders seeming to copycat a long dead serial killer. William Peter Blatty (1990)

BACK IN STOCK! A team consisting of a physicist, his wife, a young female psychic and the only survivor of the previous visit are sent to the notorious haunted house to prove / disprove survival after death. Roddy McDowall, Clive Revill, John Hough, 1973

American professor John Holden arrives in London for a parapsychology conference, only to find himself investigating the mysterious actions of Devil-worshipper Julian Karswell. Jacques Tourneur (1957)

When a mega corp of ninja training comes to town and a local beauty is kidnapped, it is up to local tough guy to leap into action to save her and the area from ill-intentioned bad guys. Ryan Harrison, 2020.

Two best friends are forced into street hustling and and ever-expanding life of crime when one impregnates the sister of the other. Eloy de la Iglesia, 1982.

An evil force takes control of a grieving filmmaker (Shane Johnson) who has vowed to disprove the existence of the paranormal.

BACK IN STOCK! A Japanese gallery owner denies his violent ninja heritage until American drug traffickers kidnap his young son.

This dramatic retelling of the Pearl Harbor attack details everything in the days that led up to that tragic moment in American history. As United States and Japanese relations strain over the U.S. embargo of raw materials, Air Staff Officer Minoru Genda (Tatsuya Mihashi) plans the preemptive strike against the United States. Although American intelligence agencies intercept Japanese communications hinting at the attack, they are unwilling to believe such a strike could ever occur on U.S. soil.

Unfulfilled and facing financial ruin, actor Nick Cage accepts a $1 million offer to attend a wealthy fan’s birthday party. Things take a wildly unexpected turn when a CIA operative recruits Cage for an unusual mission. Taking on the role of a lifetime, he soon finds himself channeling his most iconic and beloved characters to save himself and his loved ones.

BACK IN STOCK! A police S.W.A.T. team investigates about a mysterious VHS tape and discovers a sinister cult that has pre-recorded material which uncovers a nightmarish conspiracy. Simon Barrett, Steven Kostanski, Chloe Okuno, 2021.

A group of teenagers on a camping trip fight for their lives against a deadly humanoid alien, which attacks its victims by throwing bloodsucking discs at them. Jack Palance, Martin Landau, Greydon Clark, 1980

And there we go guys…a few gems coming to the shop to start the month of July. See ya down the road at the old videostore. Cheers!

This Week The Scanner Cop Is Coming To Save Us…

Hello fellow movie nerds. It's a Monday afternoon and after working the bar last night I'm quite hungover and tired. If there...

We continue to live the dream in this bizarre videostore world with the movies that bind us. This week another batch of...