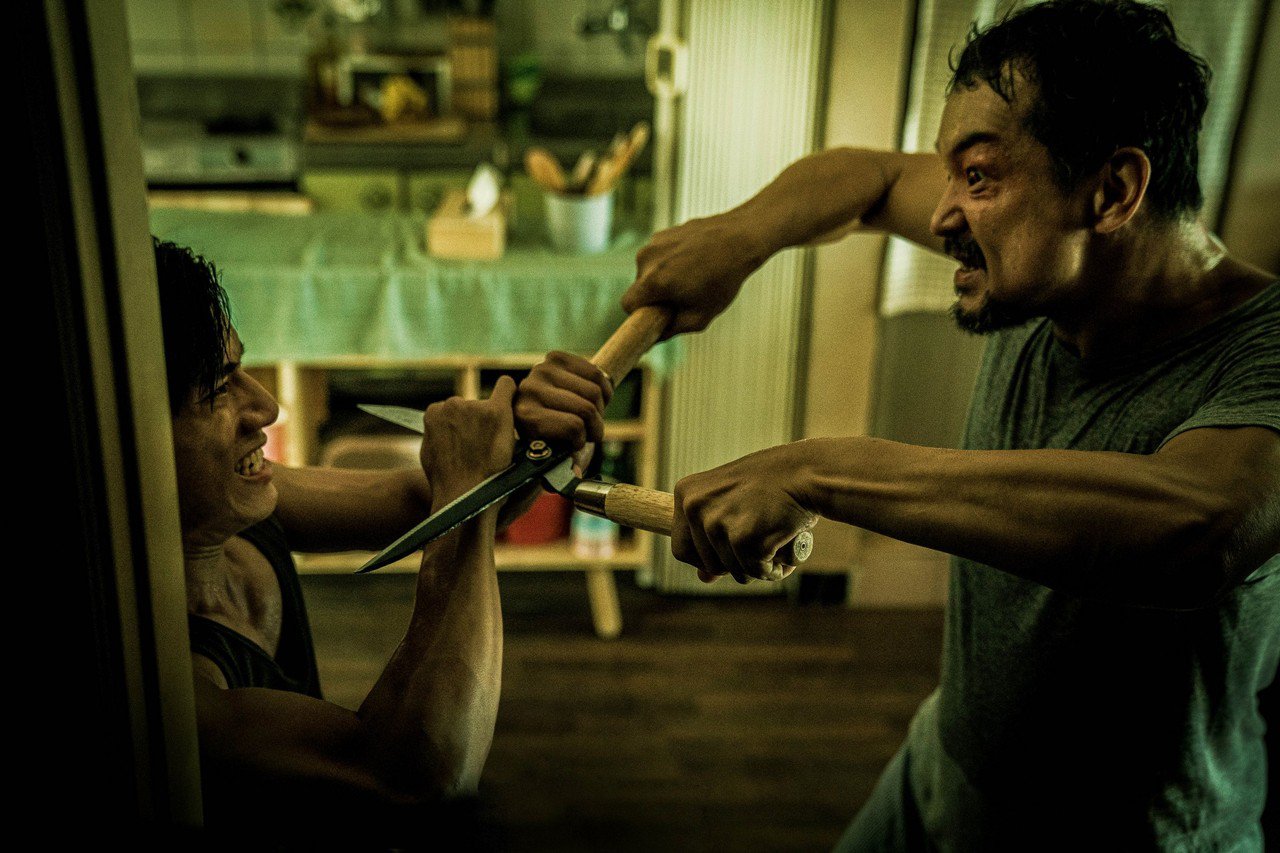 Hey Gang! Back it with new flicks hitting the shop. This week is a mix of old and new with the big one being THE SADNESS. Easily one of the nastiest virus/ zombie flicks to come out in years. But let’s just get right to it and see all the goodies that are coming in to the shop shall we…

BACK IN STOCK! Stories revolve around a witch doctor, a filmmaker (Lee Byung-hun) and a resentful extra, and a novelist and her twin sister.

After a robbery in Harlem turns into a scene of mass murder, promising young black police officer William Pope (Yaphet Kotto) is assigned to the case, along with surly, prejudiced Italian-American cop Frank Mattelli (Anthony Quinn). The pair clashes during their tense investigation as they try to track down the three suspects and apprehend them. Also searching for the fugitives is ruthless mobster Nick D’Salvio (Tony Franciosa), who will stop at nothing to retrieve the stolen money.

In this Japanese horror action film, after surviving his own execution, a man chooses to be subjected to the bizarre experiments of the prison officials. Ryûhei Kitamura, 2002.

BACK IN STOCK! Nine college students staying at a friend’s remote island mansion begin to fall victim to an unseen murderer over the April Fool’s Day weekend. Fred Walton (1986)

Sexually provocative film based on the true story of a 17th-century nun who was chastised for her religious visions and lesbian affairs. Virginie Efira, Charlotte Rampling, Daphne Patakia, Paul Verhoeven, 2021.

A street fighter (Richard Lawson) seeks revenge against the gangsters who killed his wife.

BACK IN STOCK! When a group of cannibal savages kidnaps settlers from the small town of Bright Hope, an unlikely team of gunslingers, led by Sheriff Franklin Hunt (Kurt Russell), sets out to bring them home. S. Craig Zahler, 2015.

BACK IN STOCK! One of the Videostore’s favourites! In this Mexican horror, some moronic teenagers disturb a sacred grave site for a laugh and get their comeuppance when the vengeful corpses reanimate and tear out their throats! Hugo Stiglitz, Usi Velasco, Erika Buenfil, Rubén Galindo Jr., 1985.

A British film censor sets out to solve the mystery of her sister’s disappearance & source of her grief, embarking on a quest that dissolves the line between fiction and reality. Niamh Algar, Michael Smiley, Nicholas Burns, Prano Bailey-Bond, 2021.

BACK IN STOCK! America had Al Capone; England, the Kray brothers and Australia – proving once and for all its antipodean sense of humor – has Mark “Chopper” Read. “Chopper” is inspired by the books of Mark Brandon “Chopper” Read, arguably Australia’s most infamous former criminal. “Chopper” draws on police records, court transcripts, news coverage and interviews with people who knew Chopper Read.

BACK IN STOCK! A loving father dons a clown outfit and makeup to perform at his son’s sixth birthday, only to later discover that the costume – red nose and wig included– will not come off, his own personality changing in horrific fashion. Jon Watts (2016)

After the Vietnam War, four ex-Marines return to Southeast Asia to investigate reports of American POWs being held in the country. As they travel through the jungle, they discover POWs and learn of a secret U.S. plot to keep the knowledge a secret.

Geologists in the Florida Everglades stumble upon a mad scientist’s secret lab and his experimental man-beasts.

Ridiculous but stylish 80s ultra-violent action film about a Texas ranger who must take on a childhood friend who is now a drug kingpin. Nick Nolte, Powers Boothe, Michael Ironside, Walter Hill, 1987.

BACK IN STOCK! A Northern California fishing community, built over an old leper colony, is the target of revenge by a killer fog containing zombies rising from the sea to take revenge for their deaths. Adrienne Barbeau, Jamie Lee Curtis, Janet Leigh, John Carpenter.

BACK IN STOCK! Maverick writer/director Ralph Bakshi made his feature-length film debut with this audacious foray into adult-content animation, creating one of the most successful animated features of its time! 1972.

BACK IN STOCK! That infamous cat and his twisted life are back & plunged headlong into the harsh realities of Vietnam, racial riots and Watergate of the ’70s. Robert Taylor, 1974.

Master criminal Neil McCauley (Robert De Niro) is trying to control the rogue actions of one of his men, while also planning one last big heist before retiring. Meanwhile, Lieutenant Hanna (Al Pacino) attempts to track down McCauley as he deals with the chaos in his own life, including the infidelity of his wife (Diane Venora) and the mental health of his stepdaughter (Natalie Portman). McCauley and Hanna discover a mutual respect, even as they try to thwart each other’s plans.

War has plunged Army soldier Joe Bonham (Timothy Bottoms) into an unending nightmare. Hit by an artillery shell in World War I, Joe has suffered injuries that have all but erased his humanity: he’s lost his sight, speech, hearing and sense of smell. But he still has the ability to think and remember, which, in the end, may be more a curse than a blessing. Trapped in his body, Joe realizes there’s only one way out of his misery: death. Can he get a sympathetic nurse to help him?

Josie (Rachael Leigh Cook), Melody (Tara Reid) and Val (Rosario Dawson) are three small-town girl musicians determined to take their rock band out of their garage and straight to the top, while remaining true to their look, style and sound. They get a record deal which brings fame and fortune but soon realize they are pawns of two people who want to control the youth of America. They must clear their names, even if it means losing fame and fortune.

BACK IN STOCK! One of the greatest or worst Jaws rip offs ever made. You be the judge.

BACK IN STOCK! A simple man is turned into a genius through the application of computer science. Jeff Fahey, Pierce Brosnan, Brett Leonard, 1992.

BACK IN STOCK! The legendary trilogy returns.

Manhattan socialite begins to fear for her troubled younger brother when he starts behaving bizarrely and he seems to have been friends with a backstreet murderer.

BACK IN STOCK! There’s no better way to show off your Pioneer Elite monitor than with this amped up Blu-Ray edition of the recent Troma spectacular.

Iconic sci-fi cult classic where a mid-level scientist on a global energy project malfunctions is left perhaps the last man on Earth. Searching empty cities for survivors, he deteriorates, leaving him to face what he has done. Geoff Murphy (1985)

BACK IN STOCK! The entire franchise in one lovely package.

Ultra gory inventive Taiwan-set horror in which a virus turns the infected into monsters propelled by their worst instincts. Rob Jabbaz, 2021.

BACK IN STOCK! Starring Peter Weller, scientists have created the perfect weapon: a blade-wielding, self-replicating race of killing devices known as Screamers designed for one purpose only — to hunt down and destroy all enemy life forms. Christian Duguay (1995)

The original blaxploitation classic and a vivid time capsule of seventies Manhattan in all its gritty glory. Gordon Parks.

BACK IN STOCK! After being sent to the electric chair, a serial killer uses electricity to come back from the dead and carry out his vengeance on the football player who turned him in to the police. Michael Murphy, Mitch Pileggi, Peter Berg, Wes Craven, 1989.

BACK IN STOCK! Based on the Stephen King novel, a paralysed boy, his sister and their uncle take on a werewolf who is terrorising their small town. Gary Busey, Everett McGill, Corey Haim, Megan Follows, Daniel Attias, 1985.

BACK IN STOCK! While travelling on their first tour an all-girl punk band, Ms. 45, is drugged and kidnapped. When they awaken they find their limbs removed & replaced with crude weaponry, & are forced to fight as gladiators for a sadistic town. Andrew Thomas Hunt, 2020.

BACK IN STOCK! Subversive cult classic horror-comedy about a toxic booze that melts anyone who drinks it! J. Michael Muro, 1987.

UK action crime drama where a professional safecracker (James Caan), becoming closer to his dream of leading a normal life, agrees to do a job for the mafia, who have other plans for him. Michael Mann (1981)

BACK IN STOCK! A group of young friends stranded at a secluded roadside museum are stalked by a masked assailant who uses his telekinetic powers to control the attraction’s mannequins. Score by Pino Donaggio. Chuck Connors, Tanya Roberts, Linnea Quigley, 1979.

Experience the entire Twin Peaks journey all over again as the entire series is one boxset.

A woman’s quiet life on an American farm takes a terrifying turn when the remains of her estranged mother arrive from Korea.

Politically charged Italian mob thriller about a man who exacts revenge on the girl who betrayed him to a ruthless mobster. Charles Bronson, Telly Savalas, Sergio Sollima, 1970.

BACK IN STOCK! In France, an American female attorney (A.J. Cook) defends a murder suspect who has a brutish appearance and a deadly secret.

BACK IN STOCK! Earth has been devastated by a nuclear war, which takes 2 million years for the radioactive clouds to allow sunlight in. The humans who survived the apocalypse have been transformed into mutants, while humanity’s true ancestors – fairies, elves and dwarves – resurface and live in the idyllic land of Montagar.

And there we go guys. A few goodies coming back to the shop along with a couple new titles hitting for the first time. Hope to see you down later in the week. Cheers!

The Movies Keep On Hitting In The Shop This Week…

Another week of cinema comes in the shop dear friends. Before I go any further I'm only recieving a few copies of...