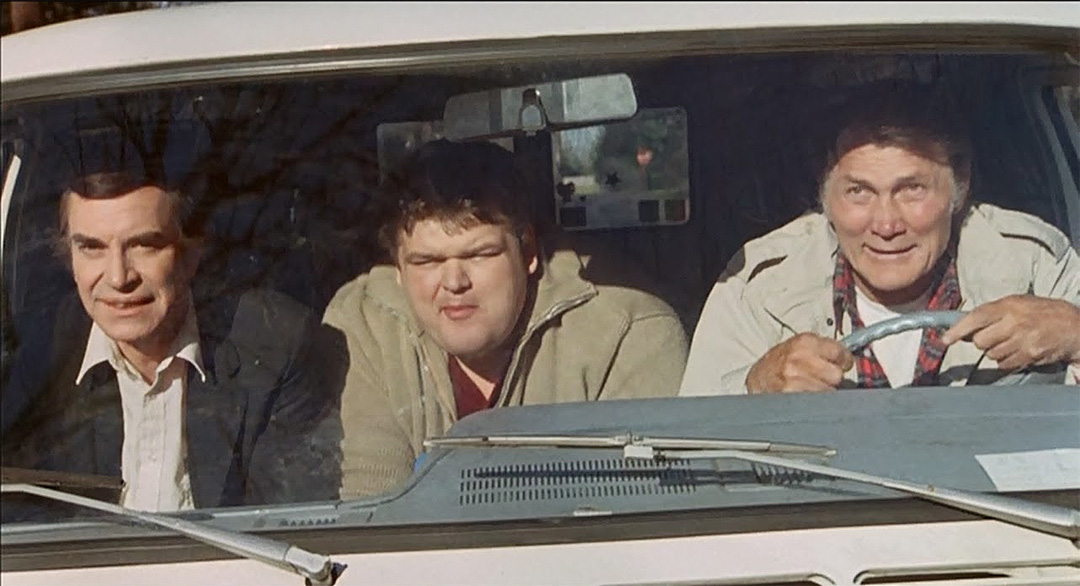 As the month comes to a close the videostore is loading up the shelves with a tone of beaauties. Personally the shop is most excited to welcome back the 1982 flick ALONE IN THE DARK which has been out of print for a decade. Now thanks to SCREAM FACTORY we get a beautiful new edition so many can finally see this hidden gem from the director of Nightmare On Elm Street 2 and THe Hidden. Let’s see what else is coming though shall we…

Found footage horror from Mexico – A newlywed couple disappeared in 1974, their 8mm tapes reveal one of the most horrifying events in Mexican history. Victor Dryere, 1976.

From the director of the cult classic the Hidden, a horror about a quartet of murderous psychopaths who break out of a mental hospital during a blackout and lay siege to their doctor’s house. Jack Palance, Donald Pleasence, Martin Landau, 1982.

Horror comedy about a devil worshipping woman who employs her “nieces” in a some flirty fishing in order to lure men back to the farm to be ground up into meat pies. Karen Black, Pat Morita, Kristine Rose, Pat Paulsen, Huntz Hall, Michael Berryman, 1992.

Documentary which looks at America’s relationship with Socialism. Yael Bridge, 2020.

A man in the under the FBI Witness Protection Program is spotted by an old girlfriend they find themselves thrown together on an exhilarating cross-country scramble. Mel Gibson, Goldie Hawn, John Badham, 1990.

Italian horror classic an American writer living in Rome witnesses a murder and grows increasingly obsessed with the incident. He launches his own investigation, heedless of the danger to both himself and his girlfriend. Dario Argento (1970)

In this cult horror, a nuclear-plant leak turns a bus-load of children into murderous atomic zombies with black fingernails. Gale Garnett, Max Kalmanowicz, 1980.

Ruby-Spears cartoon series featuring Chuck Norris as a fictionalized version of himself with a team of “radically diverse” warriors taking on crime. 1986.

A spoof of 80s action films follows an ex-commando / ninja as he fights to rescue his kidnapped daughter. Benjamin Combes, 2018.

A small group of military officers and scientists dwell in an underground bunker as the world above is overrun by zombies. George A. Romero, 1985.

The lone survivor of Dead Snow’s Zombie attack wakes in the hospital with his severed arm replaced with the arm of his Nazi nemesis, sparking a rampage of revenge by raising an undead army of his own.

David Cronenberg classic adaptation of Stephen King’s novel about a man who awakens from a coma to discover he has the ability to see into the future. Christopher Walken, Brooke Adams, Tom Skerritt, 1983.

A mysterious hooded figure slashes his way through the night staff at a roller-skating rink.

Don Knotts’ big-screen Hollywood hits: The Ghost And Mr. Chicken / The Reluctant Astronaut / The Shakiest Gun In The West / The Love God? / How To Frame A Figg

Six people unwittingly find themselves locked in another series of escape rooms, slowly uncovering what they have in common to survive — and discovering they’ve all played the game before.

Aussie action, a young woman running a wildlife sanctuary in the Australian outback fights off a group of poachers who mistakenly think she is easy prey. Mario Andreacchio (1986)

The series is set in the year 2517, after the arrival of humans in a new star system, and follows the adventures of the renegade crew of Serenity, a “Firefly-class” spaceship. The ensemble cast portrays the nine characters who live on Serenity.

Japanese animated drama directed by Goro Miyazaki, scripted by Hayao Miyazaki about the efforts of some teens to save their clubhouse, which is slated to be demolished in preparations for the 1964 Olympics. 2011.

When their school inherits a huge old private house from a weird millionaire, 6 busty co-eds decide to spend the weekend there. Only to discover that the mansion isn’t quite abandoned. Mollie O’Mara, Sharon Christopher, Mari Butler, John P. Finnegan, 1985

Chinese period martial arts film based on the myths of a famous warlord who lived during the the Three Kingdoms period of ancient China. Charles Lin, Yinghao Sheng, David Wu, Cong Cai, 2020.

A Large mutated sheep Embryo is discovered by a rancher and taken to a secret lab where it morphs into an 8-foot monstrosity, which escapes and terrifies the town. A mutant sheep is on the move near a ranch in the American West. Fredric Hobbs (1973)

Adventures from deep space to futuristic New York, and beyond. Each world and story is dominated by the presence of the Loch’nar — the sum of all evils manifest as a glowing green sphere whose power infects all times, all galaxies, all dimensions. To some, it appears as treasure, a green jewel they must possess. Others worship it as a god. Few escape it. Even in death and through death its powers continue. From war to war and world to world it seems invincible

All the Honeys! The brilliant Rick Moranis in the beloved movie and it’s sequels.

Sumptuous dramatisation of Victor Hugo’s classic novel about a gruesomely disfigured “monster” who is incapable of arousing in the beautiful leading lady anything more than pity. Lon Chaney, 1923.

Screen legend Jean-Paul Belmondo stars as a tough-as-nails mercenary who does what the police are unable to do—for a price! Bruno Cremer, Laura Antonelli, 1976.

A brave unicorn and a magician fight an evil king who is obsessed with attempting to capture the world’s unicorns. Jeff Bridges, Mia Farrow, Angela Lansbury, 1982.

Meek flower shop assistant Seymour (Rick Moranis) pines for co-worker Audrey (Ellen Greene). During a total eclipse, he discovers an unusual plant he names Audrey II, which feeds only on human flesh and blood. The growing plant attracts a great deal of business for the previously struggling store. After Seymour feeds Audrey’s boyfriend, Orin (Steve Martin), to the plant after Orin’s accidental death, he must come up with more bodies for the increasingly bloodthirsty plant.

A young woman fleeing her sexually abusive stepfather hitches a ride with 2 young men, but the 3 soon find themselves at the mercy of a backwoods Satanic cult. Melanie Verlin, Lawrence Tierney, John Hall, John A. Russo, 1982.

Godfrey Reggio directs this follow-up film to his films Koyaanisqatsi & Powaqqatsi of visual montages. Here he portrays our contemporary world dominated by globalized technology and violence. 2002.

A storm forces frightened Richard Tyler (Macaulay Culkin) inside a nearby library for shelter. Mr. Dewey (Christopher Lloyd), the librarian, sees that Richard needs an adventure and tries to give the boy a book, but all Richard wants is a phone. Before he can call his parents (Ed Begley Jr., Mel Harris), Richard slips on the floor, hits his head and passes out. When he wakes up, he finds himself in a fantasy land populated by famous literary characters.

It’s 1981 and the girls of Alpha Gamma Theta sorority are having a party. As the new pledges arrive, so does an uninvited guest. Little do the sisters know someone is watching them in the shadows. As the girls shower, study, eat and sleep the stalker studies the girls. One by one he finds the girls at their most vulnerable and murders them. The police hunt for the missing girls and their killer, but will they find them in time? Or will the girls be forced to fight for their lives…

A rural community is dying in strange and gruesome ways, the health inspector coming to the terrifying conclusion that giant slugs are breeding in the sewers and feeding on the locals! Juan Piquer Simón (1988)

A California teen’s worst nightmares about his parents come true when he returns home to find a grotesque party in full swing.

A pierced and tattooed sadist, Captain Howdy (Dee Snider), trolls the Internet for naive teens, luring them to his home to torture and defile them. When Howdy kidnaps and tortures the daughter of police Detective Mike Gage (Kevin Gage), he is caught. Deemed insane, he is sent to an asylum but is released soon after, seemingly better. However, Gage knows it is only a matter of time before Howdy strikes again, and he’s ready to unleash his own form of retribution when the time comes.

Inner-city Miami schoolteacher Jane Hetzko (Diane Venora) gets her knee broken when she stands up to the school’s gang leader, Juan Lacas (Marc Anthony). Her boyfriend, mercenary combat specialist Jonathan Shale (Tom Berenger), goes undercover as a substitute teacher to take down the punk, but soon discovers that Lacas is merely an underling for the real criminal mastermind. Assembling the team from his last jungle raid, led by his right-hand man, Joey Six (Raymond Cruz), Shale declares war.

Exploitation film set in a world where jail overcrowding has been solved by sending & abandoning the worst felons on a desolate island where they will hopefully kill each other off! Don Marshall, Phyllis Davis, Ena Hartman, Tom Selleck, Stephanie Rothman.

Norwegian drama, a confused religious girl tries to deny her feelings for a female friend who’s in love with her. Her suppressed psychokinetic powers reemerge with devastating results. Joachim Trier (2017)

Johnnie To’s most personal film is a story of 3 lost souls who collide in the neon night clubs of Hong Kong – a former judo champion now barely scraping by as an alcoholic bar owner, a young fighter intent on challenging him, and a singer chasing dreams.

Terry Gilliam’s fantastic voyage of a boy named Kevin who escapes his gadget-obsessed parents to join a band of time-traveling dwarfs for a series of misadventures. Sean Connery, David Warner, Michael Palin.

Grace Jones stars in this stylish 80’s vampire classic where two fraternity pledges get more then they bargained for when they go searching for strippers. Richard Wenk (1986)

A troubled woman who feels betrayed by those around her seeks revenge.

And there we go guys. Pretty sweet week of cinema coming up. TITLES SUBJECT TO CHANGE ON ARRIVAL and the shipment will either be here on THURSDAY OR FRIDAY. Let’s hope for Thursday. The sooner the better. Anyways…the videostore loves ya. Cheers!

Another glorious week of the forgotten, new, bizarre, intriguing, and simply classic cinema is upon as the videostore continues to do it's...

This Week The Money Moves With The Release Of An Ozzie Classic!

This week among the movies coming into the shop the videostore is excited to see another forgotten Ozsploitation flick getting a well...