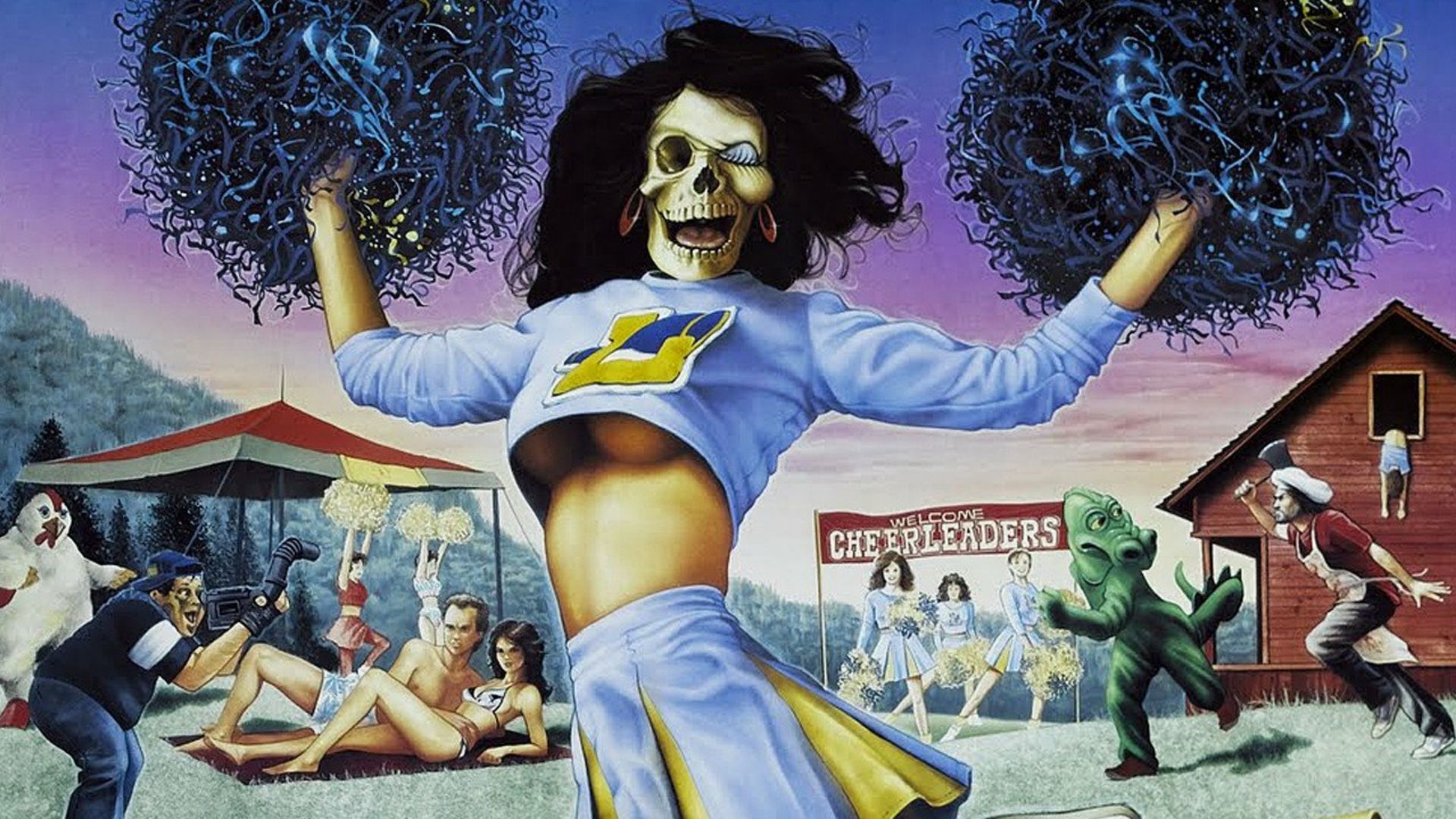 I would like to start by saying I like bad cinema. I wanna double down and say I love slasher films. And I have to say I freaking love bad 80s slasher films! If there is one movie that I can not help but love no matter how terrible I understand it is is the 1988 cult classic CHEERLEADER CAMP. I suppose I’m partially writing about the film today because at this current point in time the movie is sadly OUT OF PRINT. Truly this is a crime against cinematic society. I cherish my DVD copy that sits on the dusty racks of the videostore and no amount of money will get me to sell it until it finally gets the proper new special edition it deserves. Looking at you ARROW VIDEO or SCREAM FACTORY. Hell, I personally think Criterion should take a swing at this masterpiece.

As for the movie itself where do I begin? Our star, Betsy (Saw 3,4,5,6,7) Russell, plays Alison. Now this young lady is troubled with some serious messed up visions involving terrifying pom poms and the overall fear of disappointing everyone. Specifically letting down her team of cheerleaders as they are heading to the “epic” world class cheerleader tournament that features the best of best duking it out for some random prize that happens to be taking place at a summer camp. Pretty sure it was the set of Meatballs or Sleepaway Camp. Joining her on this magical journey of WTF is her ‘loving” boyfriend played by former teen heart throb Leif Garrett. He is the real caring type that is kinda concerned with his girlfriend’s mental issues but at the same time trying to get his groove on with the team’s other ladies mainly played by former Penthouse Playmates hence you know we are gonna get that fine 80s nudity. 12 year old me just got excited thinking about that.

Anyways, rounding out the amazing team is the mascot who is played by childhood crush Lucinda Dickey who I adore in other 80s classics such as NINJA III: The Domination and Breakin and Breakin 2. Her character Cory seems to be the only one that actually cares about Alison’s mental breakdowns and tries her best in between training in her Alligator costume to cheer her up.

Now I mentioned it is a slasher flick but honestly for the first 45 minutes you convince yourself you’re actually just watching another sex comedy. From the funny fat guy, played with tender love and care by Travis McKenna, to obvious T and A, pranks, grumpy camp cook, stuck up and bitchy head female boss, and just really awkward yet hilarious dialog. Infact if the entire film was just this with our heroes overcoming the odds by the end and winning the competition ALA Karate Kid I would still love this film!

But eventually the killings begin and cheerleaders start dropping left, right, and center. Now this only happens after the “talent” show in the competition and man does our team deliver the goods with easily the greatest hip hop routine witnessed in cinema! As bodies start to pile the focus moves to “guess who is the killer?” in this brilliant mess of a movie. Is it Alison who keeps having visions of murder and blood? Is it her cheating, all about me, boyfriend? Could it be Timmy who has taken his jokes one step too far? I mean, it couldn’t be her concerned friend and mascot Cory could it? She’s so innocent and wears an Alligator suit. I feel I have said too much to solve this Scooby Doo style climax. The point is I LOVE THIS MOVIE. For everything that’s wrong with it including the fact the majority of the cast playing these world class cheerleader athletes are all in their late 20s it doesn’t matter! Like taking ingredients that have no business working in the same meal this movie has created something magical in the world of slasher films that few have been able to repeat.

Don’t believe me? Come by the shop and if you are lucky enough to see the movie not rented and it’s on the shelf please watch this campy mess of amazing! If I was to complain about anything it’s the change of the title. I feel BLOODY POM POMS was the winner for sure but hey, minor issue.

CHEERLEADER CAMP is simply the perfect film to represent my shop. It’s old school, it’s funny, bloody, campy, and at times WTF. This is not a review by any means. I’m not a critic, just a guy who likes to talk about movies. But if it was a review….10/10. Until next time kids…please be kind and rewind and support your local video store. Cheers!

Time To Explore Another Batch Of New Cinema At The Videostore…

Another week is upon us guys and we got some beautiful special editions of some 80s gems. Joe Dante's EXPLORERS and CHUCK...

As The Heat Rises So Do The Number Of Movies Coming…

Well hey there guys, another glorious week is upon us at the old videostore and this week it's a crazy mixed bag...