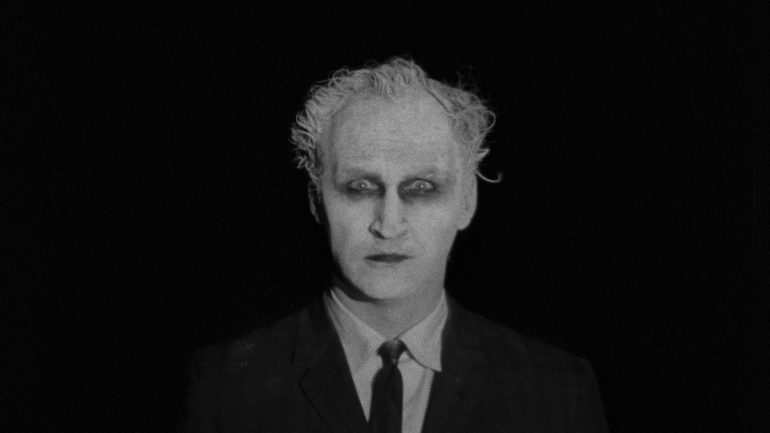 Back In Stock! Charming zom-com, about a military experiment gone wrong which spills into a bowling alley transforming a quartet of idiots into zombies without them being aware of the change.

Two disc double feature box set includes the Nightmares in Red, White & Blue about the evolution of Horror movies in the US and American Grindhouse about the history of the exploitation film.

One of the great lost masterpieces of Japanese animation, this film is a mad, swirling, psychedelic light-show of medieval tarot-card imagery with horned demons, haunted forests and explicit Gustav Klimt-influenced eroticism.

Back In Stock! Over 20 years after his death by a gunshot, Jimmy Bones comes back as a ghost to wreak revenge on those who killed him and to clean up his neighborhood.

Back In Stock! Great Doc on the legend that is Corman.

Korean action horror. A champion MMA fighter abandons his Christian faith but then develops stigmata on his hands, so he helps an exorcist fight evil. Joo-hwan Kim (2019)

Back In Stock! On the hottest day of the year on a street in the Bedford-Stuyvesant section of Brooklyn, everyone’s hate and bigotry smolders and builds until it explodes into violence. Spike Lee (1989)

Back In Stock! A combined 22 hours over the greatest trailers from the 70s and 80s!

Children are hidden away in the attic by their conspiring mother and grandmother. Jeffrey Bloom (1987)

Two aspiring filmmakers document the mishaps of their first feature film, with the guidance of their eccentric lead actor.

A tale of the bungling of Armageddon features an angel, a demon, an eleven-year-old Antichrist, and a doom-saying witch.

Swedish documentary. Fictionalized documentary showing the evolution of witchcraft, from its pagan roots to its confusion with hysteria in modern Europe. Benjamin Christensen (1922)

An eloping bride is taken into Hell, and her fiancé must pursue.

Back In Stock! 80s horror comedy classic, a divorced novelist inherits an old mansion, where he decides to write his next book. Unfortunately, the house’s malevolent supernatural residents have other ideas… Steve Miner (1985)

Back in Stock! A group of hippies wreak havoc on a small town and a young boy, whose grandfather and sister were attacked by them, decides to get even, with deadly results.

Back In Stock! In this followup to the cult Moon Nazi film Iron Sky, the remaining humans return to Earth to steal the Holy Grail from Lizard people who live in the centre of the Earth. Udo Kier, Timo Vuorensola (2019)

Back In Stock! An uncompromising masterpiece of tension and all-too-realistic violence! A gang of masked men break in and take an entire family hostage demanding the father hand over everything or his family dies. Miguel Angel Vivas, 2010.

All 8 of the indefatigable Leprechaun series! He’s been to outer space and back to the hood, but will he ever find his gold?

Back In Stock! Underrated (though not terribly original) horror from the early 80’s about a psychopath who slaughters the inhabitants of a youth camp. Joe Giannone, 1982.

Back In Stock! Starring Emilio Estevez, a group of people try to survive when machines start to come alive and become homicidal. Stephen King (1986)

Baltimore auteur Don Dohler directs this cult classic about a alien convict who lands near a small East Coast town, armed with his vaporizing ray gun and a goal of killing everyone who crosses his path. Don Dohler (1982)

Charlie Manx, a seductive immortal who feeds off the souls of children, has his whole world threatened when a young woman in New England discovers she has a dangerous gift. TV Series (2019)

Back In Stock! The quintessential silent vampire film, remastered in high definition for the first time.

Back In Stock! The creepy best seller returns.

Back In Stock! A high school slacker commits a shocking act and proceeds to let his friends in on the secret. However, the friends’ reaction is almost as ambiguous and perplexing as the crime itself.

Brand New STEELCASE SPECIAL EDITION! A group of rock-music-loving students, with the help of the Ramones, take over their school to combat its newly installed oppressive administration. Allan Arkush (1979)

Starring Charles Bronson, Anthony Perkins, A neurosurgeon with a cheating wife takes an amnesiac into his home and conditions him to believe that the cheating wife is his own and to take the “appropriate” action. Nicolas Gessner (1971)

Back In Stock! Carl Theodor Dreyer’s unsettling, dreamlike horror film about an occult student assailed by various supernatural haunts and local evildoers in a village outside Paris. 1932.

Both Volumes Back In Stock! Every Video Nasty critiqued and explored, followed by the original trailers plus the follow up with all 82 films that fell afoul of the Director of Public Prosecutions Section 3 list are trailer-featured with specially filmed intros for each title, alongside director Jake West’s brand new documentary.

Back In Stock! Blu-Ray release of Cronenberg’s seminal sci-fi horror.

Back In Stock! An animated pre-apocalyptic propaganda nightmare set in another dimension.

Deeply disturbing animated horror about a group of troubled children haunted by a talking dog who brings them on surreal hell-rides between different dimensions and time periods. 2011.

And there we have it kids. Some of the titles coming back this week. Come on down and say hi if you are in the area. And as always the videostore loves you. Cheers!

Coming This Week…back in stock! A personal guilty pleasure favorite!

As the magic month continues towards the 31st I sit in the shop thinking about the not so obvious choices to watch...

Another Week Of New Goodies Hitting The Shop…

Another fine week of cinema comes rolling into the shop with some oldies, some oddes, and some surreal and haunting titles. So...