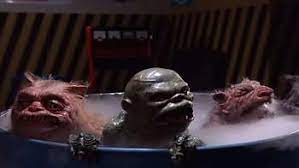 Well the world keeps spinning just like a movie on a disc and this week another fine batch of goodness makes it’s way to the shop. Some reissues, some new stuff, and some forgotten stuff. Let’s take a look shall we…

A beautifully shot modern fairy tale about a full-sized inflatable sex doll who takes on a life of her own, develops a soul and falls in love with a video store clerk. Bae Doona, Arata Iura, Hirokazu Koreeda, 2009.

Wolfgang Amadeus Mozart (Tom Hulce) is a remarkably talented young Viennese composer who unwittingly finds a fierce rival in the disciplined and determined Antonio Salieri (F. Murray Abraham). Resenting Mozart for both his hedonistic lifestyle and his undeniable talent, the highly religious Salieri is gradually consumed by his jealousy and becomes obsessed with Mozart’s downfall, leading to a devious scheme that has dire consequences for both men.

I AIM AT THE STARS: This drama takes a look at the controversial life of Dr. Wenher von Braun (Curt Jurgens). During World War II, von Braun developed the deadly V-2 rocket, which was a key weapon for Germany in the strikes against London. But after the war, he defected to the United States to help them develop their Cold War satellite program. Accusations of Nazi sympathies and angry attacks by those who suffered from his rockets plague the doctor, who repeatedly claims he was forced to work for the Nazi party.

MAN ON A STRING: During the height of the Cold War, espionage between the United States and the Soviet Union runs rampant. In the middle of it all, Boris Mitrov (Ernest Borgnine) — who was born in Russia but became a U.S. citizen — turns against his adopted country to become a spy for the communists. However, Mitrov’s spy network is compromised, leading the CIA to easily capture him. Fortunately for Mitrov, the CIA wants to use his abilities to make him a counterspy for the U.S.

BACK IN STOCK! Molly is top of her class at her prestigious high school, but what her classmates and teachers don’t know is she works nights as a prostitute on Hollywood Blvd. Robert Vincent O’Neil (1983)

A collection of 3+ hours of short experimental LGBT+ works that will ensnare your senses and leave you desperate for more of the wonderful and weird world of Bertrand Mandico. Elina Löwensohn, Vimala Pons, 2018.

BACK IN STOCK! Camp classic about people and pets being eaten by the traditionally docile fruit. A special government task force is set up to investigate the violent veggies and put a stop to their murderous spree. John De Bello (1978)

BACK IN STOCK! Jack is desperately trying for a new start in life, but when he throws away his childhood bear Benny, it’s a move that can only end in death. Karl Holt, 2019.

BACK IN STOCK! When an interdimensional rupture unravels reality, an unlikely hero must channel her newfound powers to fight bizarre and bewildering dangers from the multiverse as the fate of the world hangs in the balance.

An eye-opening cultural history of lesbian pulp literature of the 40s to the 60s and their influence of lesbian bar culture. Lynne Fernie, Aerlyn Weissman, 1992.

FINALLY BACK IN PRINT! A beautiful new edition of Ghoulies 1/2 loaded with new bonus features..

Aussie release of the classic! Adventures from deep space to futuristic New York, and beyond. Each world and story is dominated by the presence of the Loch’nar — the sum of all evils manifest as a glowing green sphere whose power infects all times, all galaxies, all dimensions. To some, it appears as treasure, a green jewel they must possess. Others worship it as a god. Few escape it. Even in death and through death its powers continue. From war to war and world to world it seems invincible.

Young Anthony Soprano is growing up in one of the most tumultuous eras in Newark, N.J., history, becoming a man just as rival gangsters start to rise up and challenge the all-powerful DiMeo crime family. Caught up in the changing times is the uncle he idolizes, Dickie Moltisanti, whose influence over his nephew will help shape the impressionable teenager into the all-powerful mob boss, Tony Soprano.

A traumatized widow seeks a place to heal in an English country house where she instead finds herself in an escalating nightmare in this surreal folk horror. Jessie Buckley, Rory Kinnear, Alex Garland, 2022.

Based on a Charles Willeford novel, an ex-con goes on a robbery rampage, while his new girlfriend is oblivious to his thieving ways. Fred Ward, Alec Baldwin, Jennifer Jason Leigh. 1990.

Stylish Italian post-apocalyptic where two thirteen-year-old orphans, who grew up together, dream of joining one of the gangs that roam and control the small coastal town. Alessandro Celli, 2021.

Back In Stock! The Legendary Trilogy!

Tasked with overhauling a university football team that was dismantled for breaking collegiate rules, coaches Wally Riggendorf (Robert Loggia) and Ed Gennero (Héctor Elizondo) pick unusual new players like junior professor Andre Krimm (Sinbad) and 30-something quarterback Paul Blake (Scott Bakula). As Paul courts professor Suzanne Carter (Harley Jane Kozak), the team struggles until the arrival of a female placekicker, who bolsters the squad as it gets ready to challenge its big rival.

BACK IN STOCK! Fun cult film about a pair of Valley Girls who survive the apocalypse and must defend themselves against zombies while they go shopping. Mary Woronov, Catherine Mary Stewart, Robert Beltran, Kelli Maroney, 1984.

A glamour photographer gets mixed up in a series of mutilations which echo the murders of Jack the Ripper. James Hansen, April Audia, Larry Thomas, Jeff Hathcock, 1986.

BACK IN STOCK! Featuring Gregory Peck. Experience the ultimate in horror with The Omen Collection, featuring all four original films as well as the 2006 remake that terrified audiences. (1976-2006)

Dennis Hopper directs & stars in this story of a young girl whose father is an ex-convict and whose mother is a junkie finds it difficult to conform and tries to find comfort in a quirky combination of Elvis and the punk scene. Linda Manz, Sharon Farrell.

BACK IN STOCK! Two adults and a juvenile burglar break into a house occupied by a brother and sister and their stolen mutant children and can’t escape. Then things get worse. Brandon Quintin Adams, Everett McGill, Wendy Robie, 1991.

After Anna (Isabelle Adjani) reveals to her husband, Mark (Sam Neill), that she is having an affair, she leaves him and their son. Mark is devastated, and seeks out Heinrich (Heinz Bennent), the man who cuckolded him, only to receive a beating. After a series of violent confrontations between Mark and Anna, Mark hires a private investigator to follow her. Anna descends into madness, and it’s soon clear that she is hiding a much bigger secret — one that is both inexplicable and shocking.

The Troma double feature of Return To Nuke Em High BVol 1 and 2 return to the shop!

A pair of freewheeling bikers takes on an unscrupulous land developer to protect their friend’s wetlands property.

A samurai answers a village’s request for protection after he falls on hard times. The town needs protection from bandits, so the samurai gathers six others to help him teach the people how to defend themselves, and the villagers provide the soldiers with food. A giant battle occurs when 40 bandits attack the village.

A troubled bullied adolescent loner grieving the loss of his mother befriends a supernatural entity who begins to protect him. Jeremiah Kipp, 2021.

BACK IN STOCK! A California teen’s worst nightmares about his parents come true when he returns home to find a grotesque party in full swing.

Gail Osborne is an average high school girl whose life is turned upside down after she is attacked and savagely assaulted. Unsure of who was behind her brutalization, Gail does her best to continue her life. But when a mystery person begins leaving her threatening messages and making unsettling phone calls, Gail realizes that her nightmare is only just beginning, and that whoever was responsible for her assault is far from through with her. Who could it be and just how far are they prepared to take their macabre plans?

High society mogul and bad boy, Richard Trainor, has just unveiled his latest nude calendar. During the launch party, one of the models is thrown to her death off of a balcony by a black gloved killer. Called into investigate is Lieutenant Dan Stoner, a hard nosed cop who’s thrust into the high stakes world of nude and fashion modeling, quickly finding himself intrigued by and attracted to the beautiful and vulnerable seeming Cassie. But when the killer begins to strike again, going in the order of the calendar itself, Stoner realizes that he needs to solve the mystery soon or risk all of the models ending up in the morgue!

While late one night at his father’s dock-side office, young Luke sees his father brutally murdered by a mysterious, yellow raincoat wearing and hook wielding assailant. Traumatized by the event, child psychologist Dr. Hollis is called in an attempt to figure out what Luke saw and whether he can unmask the killer. Striking up a relationship with Bass, the lead detective on the case, Hollis finds herself in for more than she’s bargained for as the unknown killer decides to do away with those who get too close to uncovering his motives and identity.

Double feature includes both sequels to the classic, In the Heat of the Night: THEY CALL ME MISTER TIBBS (1970) / THE ORGANIZATION (1971)

Harrowing documentary-style account of a nuclear holocaust and its effect on the working class city of Sheffield, England, and the eventual long-term effects of nuclear war on civilization. Mick Jackson, 1984.

The cult classic gets a 4K makeover! Filled with unforgettable moments of sleazy sex and vicious brutality, including one of the most jarring scenes in exploitation film history! Christina Lindberg, Bo Arne Vibenius.

Inspired by fairy-tales such as Alice in Wonderland and Little Red-Riding Hood, this surreal Czech tale merges love, fear, sex and religion into one fantastic world. Jaromil Jires, 1970.

And there we go guys. Another week of cinematic gold hitting the shop. Hope to see you later in the week. Cheers!

More Movie Goodness Shows Up To The Videostore…

And the movie world keeps on trucking at the videostore. A new week is upon us and so are more tiites for...

Before we all watch this movie..