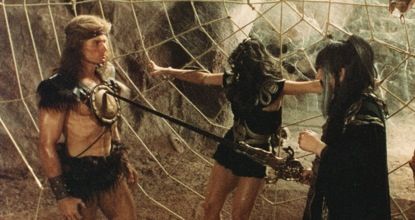 Another fine week of cinema comes rolling into the shop with some oldies, some oddes, and some surreal and haunting titles. So let’s take a look to see what’s coming to your local videostore shall we?

First time on Blu Ray! Cult director Joe D’Amato gives us this 80s Italian muscle man movie who seeks revenge for the deaths of his family and friends against a spider cult. Miles O’Keeffe, Sabrina Siani, 1982.

First Time on BLU RAY! An alien travels to Earth on a meteorite and mates with humans to preserve its species and destroy humanity. Todd Jensen, Samantha Womack, Paul Matthews, 1997.

Back In Stock! The tragic tale of an all-American girl who was transformed into a cold-blooded killer in the summer of 1969. Mary Harron (2018)

Italian crime thriller where a hungry young criminal is beaten and abandoned by the local gang boss after he tries to skim off some profits for himself, he forms his own group of misfits in order to exact revenge. Pasquale Squitieri (1975)

Alex is caught in a web of distrust between his brother, his best friend, a beautiful stranger and the renewed dreams of the slaughter of his family. Kristine Peterson (1988)

Japanese Sci-Fi. Kappa are water mythical goblins, but a militant splinter group of researchers is dedicated to developing them into amphibious super soldiers. Tomo’o Haraguchi (2010)

While on a mission to stop a drug operation, three Federal agents accidentally discover gold from the Civil War. With the aid of a corrupt agent, a ruthless criminal kingpin will hunt them down, one by one. Christian Drew Sidaris (1993)

Starring Peter Cushing. Upon returning to his home village to continue his experimental research, the destitute Dr. Frankenstein revives his old creature, but a hypnotist wants the monster to control for himself. Freddie Francis (1964)

Back In Stock! Starring Donnie Yen. The Kung Fu master travels to the U.S. where his student has upset the local martial arts community by opening a Wing Chun school. Wilson Yip (2019)

Hours after being released from prison, Jesus Quintana from the Big Lebowski pairs up with two fellow misfits, embarking on a freewheeling joyride of petty crime and romance. John Turturro, Audrey Tautou (2019)

Back In Stock! Starring Dennis Hopper, John Leguizamo, and Asia Argento, The living dead have taken over the world, and the last humans live in a walled city to protect themselves as they come to grips with the situation. George A. Romero (2005)

A vampire pretender who is murdering women runs into a real vampire who is out to stop him because he is casting too much of a spotlight on the vampire community. George Chakiris, Wings Hauser, Pamela Ludwig, 1990.

Austrian horror. Finally, graduated and off to Croatia. It’s supposed to be the “party of their lives.” But for Julia and her friends their graduation trip turns into a horror trip, from which not everyone will return. Dominik Hartl (2018)

A documentary that goes beneath the surface of Hollywood romantic comedies, seeking to better understand the way we view love, relationships, and romance.

The Catholic Church is trying to save an innocent soul from the ravages of satanic possession. Wave after wave of holy men are sent to confront the possessed. Stephen Biro (2017)

All 3 seasons of David Lnych’s Twin Peaks in one nice set.

And that’s what hits the shop later this week. Hope life is good for one and all as we keep on trucking through the movie paradise. Cheers!

A Few Gems Come Rolling In To The Shop This Week…

As the days and weeks keep on rolling and the world tries to get a little more normal one baby step at...