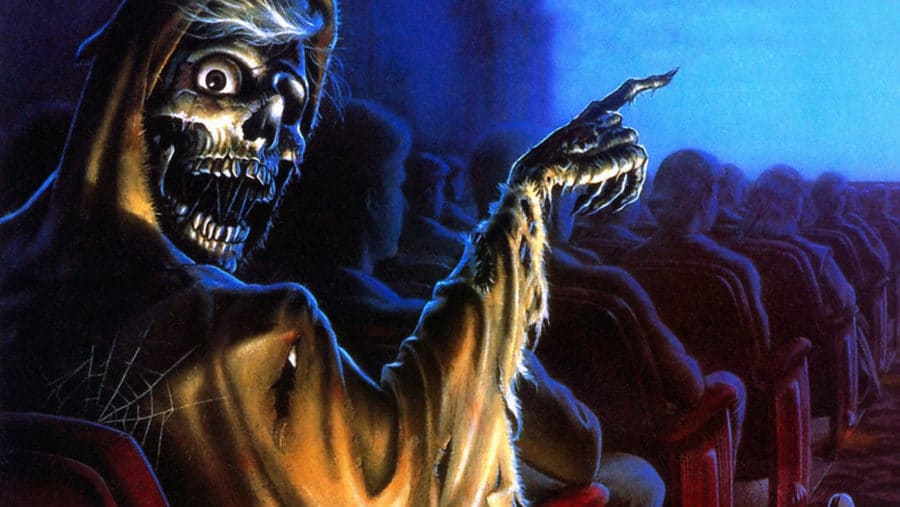 Happy Monday kids! As I wake myself up from a long Sunday night at work with my coffee I figure it’s a great time to let you all know what is coming to your friendly neighbourhood videostore this week so here we go…

First up…some trashy B-Movie UFO goodness. What Stanton Pinborough knows could change the world and topple governments overnight. He is sustained by a team of nurses around the clock, but no one has actually seen the eccentric and reclusive ex-government researcher for over 30 years. It’s Michael’s first night on the job when he begins to see shadows emerge from halls and doorways. Michael’s supervisor, Robin, seems to know many of Pinborough’s secrets but suddenly disappears unleashing a maelstrom of horror beyond his wildest imagination. Michael has no choice but to confront Pinborough who reveals that he was a part of The Majestic 12 and covertly recovered an alien infant from the Roswell crash in 1947. He has kept the alien a secret all these years as retaliation for his own son’s abduction years prior. Now Michael must retrieve the alien baby or risk being abducted himself. Hell is empty…all the devils are here.

Back in stock! A popular in the shop and why not? A chemical accident turns ordinary donuts into blood thirsty killers. Now it’s up to Johnny, Michelle and Howard to save their sleepy town from…Killer Donuts.

Back In Stock! A nifty little 4 pack of films including Eli Roth’s best film still, it’s mismanaged but still enjoyable sequel, the fantastic Neil Marshall film The Descent, and the, um, sequel. Less said the better. 3 out of 4 ain’t bad at all! Also this version is now out of print. Once sold that’s it.

Back In Stock. Look, is it a good movie? No, absolutely not. Is it so bad that Tony Todd does not even like talking about it? Yes. Yes it is. But are we completists when it comes to franchises. You bet your ass we are.

One of the best recieved genre flicks of the year hits the shop. Who doesn’t love a well done Alligator flick? A sleeper hit from the summer blockbuster season. A young woman, while attempting to save her father during a category 5 hurricane, finds herself trapped in a flooding house and must fight for her life against alligators.

Back In Stock! The sexy Arrow Video edition returns to the shelves. Horror titans George A. Romero and Stephen King deliver yet another fiendish selection of blood-curdling tales in Creepshow 2 – now newly remastered in 2K! Michael Gornick (1987)

Back In Stock! A single mother moves into a dilapidated apartment complex and experiences startling visions and sounds, calling her mental well-being into question, and endangering not only her custody of her child, but perhaps their lives as well. Hideo Nakata (2002)

Back In Stock! Aussie cult horror set in the near future, where a teenage couple is trapped in a drive-in theatre which has become a concentration camp for social outcasts gorging on drugs, exploitation films, junk food, and new wave music. Brian Trenchard-Smith (1986)

Rob Zombie always said he wanted a part for Michael J. Pollard in House Of A 1000 Corpses because Dirty Little Billy was one of his favourite flicks back in the day. Come see why. A more realistic, based-on-reality, unsensationalistic portrayal of the gritty early years of one of the most famous Wild West outlaws in history, Billy The Kid.

Back In Stock! The brain melting best seller! The found footage collective, Everything is Terrible! Has taken over 2,000 forgotten VHS tapes and re-contextualized them in order to tell the tale of The Dark Lord himself,

Billy Friedkin does not like talking about this movie but he made it and truly it’s a guilty pleasure. Wealthy couple hire a sexy nanny, only to discover that she’s a baby killing Druid! Ahhh!

An atmospheric arthouse folk tale set in the hills of Wales during the industrial revolution.

How could Todd Phillips, the director of the Hangover Trilogy and Road Trip, make JOKER? Have you seen his first directed film? Special edition of the legendary documentary featuring the most detailed and intimate footage the world will ever see of GG.

Ralph Bakshi’s grim and darkly comic animated film about a troubled artist and his bartender turned prostitute friend as they travel through a surreal city. 1973.

Back In Stock! 80s horror comedy classic, a divorced novelist inherits an old mansion, where he decides to write his next book. Unfortunately, the house’s malevolent supernatural residents have other ideas… Steve Miner (1985)

A young family moves from their cramped New York City apartment to a spacious new home in New England. But this is no ordinary house in the country: the previous owner was the deranged Dr. Freudstein!

Back In Stock! After all these years Takashi Miike’s splatter gangster flick remains one of the best sellers ever at the Lobby Dvd Shop!

Back In Stock! A young physician (James Spader) is accused of emulating Jack The Ripper when several LA prostitutes turn up murdered and disembowelled. Rowdy Herrington, 1988.

Italian horror. A demented nun sliding through morphine addiction into madness, whilst presiding over a regime of lesbianism, torture and death. Giulio Berruti (1979)

Some movies take a few years to get discovered by people. Lake Mungo from 2008 seems to be one of them. Atmospheric horror mockumentary from Australia about the ghost of a woman who mysteriously died.

For 100 years, stories have been told about a cult near Hackett Ranch where people have been kidnapped and never found. The owners of the ranch say they know nothing about it. Guess where this year’s rodeo is?

Hong Kong horror. A mother and her son are disturbed by a the presence of a stranger as they await for the return of the father from work. Ho Pong Mak (2018)

A couple travels to Sweden to visit a rural hometown’s fabled mid-summer festival. What begins as an idyllic retreat quickly devolves into an increasingly violent and bizarre competition at the hands of a pagan cult.

A down-on-his luck beach bum asks a cute female genie to help him seduce the woman of his dreams only to realize that he might be looking in the wrong place. 1992

Featuring Gregory Peck. Experience the ultimate in horror with The Omen Collection, featuring all four original films as well as the 2006 remake that terrified audiences. (1976-2006)

Back In stock! Director John Waters breaks every rule of good filmmaking and good taste with his 1972 landmark cult classic sets a benchmark for the bizarre that has never been equaled. A trailer park bon vivant must defend her title as the filthiest person alive.

Back in Stock! The 2001 Japanese cult classic! Two groups of people discover evidence that suggests spirits may be trying to invade the human world through the Internet.

Back In Stock! Yes, it’s a terrible sequel. But this edition has a sweet documentary on it with the filmmakers admitting it’s a terrible sequel and this special edition has dropped in price for you collectors. Cyborg law enforcer RoboCop returns to protect the citizens of old Detroit but faces a deadly challenge when a rogue OCP member secretly creates a new, evil RoboCop

One of my personal favourites! Not ready for marriage, a fashion model moves into an unbelievably nice Brooklyn Heights apartment, where scary occurrences turn into a much more frightening turn of events. Cristina Raines, Ava Gardner, Chris Sarandon, Michael Winner, 1977.

In the dark days of World War II, the Nazi High Command ordered its scientists to create a top secret race of indestructible zombie storm troopers – un-living, unfeeling, unstoppable monstrosities that killed with their bare hands.

Back In Stock! It’s Garbage Day! After his parents are murdered, a tormented teenager goes on a murderous rampage dressed as Santa, due to his stay at an orphanage where he was abused by the Mother Superior. Charles E. Sellier Jr. (1984)

A rural community is dying in strange and gruesome ways, the health inspector coming to the terrifying conclusion that giant slugs are breeding in the sewers and feeding on the locals! Juan Piquer Simón (1988)

Documentary. The emotional story of Kane Hodder who survived a harrowing childhood and near-death accident to become one of films biggest and most beloved horror icons. Derek Dennis Herbert (2017)

Psychological trauma and aberrant sexuality abound in this twisted 1972 tale of a young woman whose severe daddy issues send her on an unforgettably bleak downward spiral. Stanley H. Brassloff (1972)

Back in Stock! Just in time for Halloween!

More copies of this new cult classic hit the shop. Make sure to get yours! After losing his parents, a priest travels to China, where he inherits a mysterious ability that allows him to turn into a dinosaur. At first horrified by this new power, a hooker convinces him to use it to fight crime. And ninjas.

We all the movie. We were wondering how the TV show would turn out. Simple answer…brilliant. Laugh Out Loud. Comedic genius! Starring Matt Berry. A look into the daily (or rather, nightly) lives of three vampires, who’ve lived together for over 100 years, on Staten Island. (2019)

Back In Stock! Starring Nicolas Cage, Laura Dern, and Willem Dafoe, Young lovers Sailor and Lula run from the variety of weirdos that Lula’s mom has hired to kill Sailor. David Lynch (1990)

And there it is my friends! This week’s shipment of flicks to tide you over. As usual first come first serve. So as always from the underground world of the videostore we’ll see you soon. Cheers!

Last shipment of movies coming into the shop until Christmas so take advantage for those last minute gifts. Let use dive into...

A New Month Brings Us New Movies To The Videostore…

Back In Stock! After the death of her parents, a young girl arrives at a convent and...