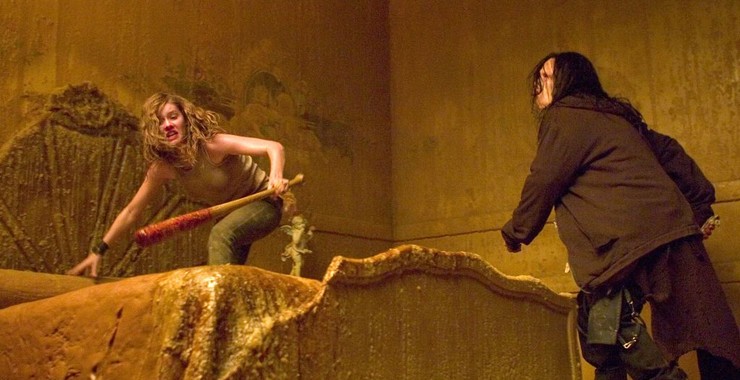 Another week of sexy cinema comes crashing into the shop and it’s a little bit of everything dear friends. So let’s get right to it shall we?

Starring Madonna and Willem Dafoe, A lawyer defends a woman accused of killing her older lover by having sex with him. Uli Edel (1993)

Dreamlike psychological thriller about a pair of vegan lesbians who’s love for each other, their dog and meat becomes an all-consuming madness. Caleb Michael Johnson, 2020.

Vietnam vet finding his life is a festering sewer of poverty, hopelessness and violence decides to get revenge! Troma-style! Commentary with German filmmaker Jorg Buttgereit.

80’s horror about 8 teenagers trapped after hours in a high tech shopping mall pursued by murderous, out of control security robots. Jim Wynorski, 1986.

Giallo about a blind pianist tries to figure out who is responsible for a string of murders using a black cat with its claws dipped in curare. Anthony Steffen, Sylva Koscina, Sergio Pastore, 1972.

In 1917, nine British soldiers find themselves lost in enemy territory on the Western Front. They take refuge in a corpse-filled, rat-infested enemy trench where they wait for rescue. As night falls, however, the men sense that they are not alone – and soon they begin to die one by one

Sylvia Stickles (Tracey Ullman) runs a convenience store with her husband (Chris Isaak) and mother-in-law (Suzanne Shepherd). One day, Sylvia is hit on the head and transforms from an uptight prude to a sex-crazed lunatic. As she goes on a rampage through town, Sylvia attracts the attention of Ray Ray (Johnny Knoxville), a sexual healer and tow truck driver in search of the world’s greatest orgasm. Their sexual revolution, however, causes a class war in their tiny Baltimore community.

A comedy that follows the chaos that ensues when a meteor hits the Earth carrying alien life forms that give new meaning to the term “survival of the fittest.” David Duchovny, Orlando Jones, Seann William Scott, and Julianne Moore are the only people standing between the aliens and world domination… which could be bad news for the Earth.

The grandson of Dr Frankenstein works as a lab assistant while secretly assembling a perfect being, with some help from the gardener and an accidental murder.

IMPORT EDITION…Obsessive scientist Dr. Pretorius (Ted Sorel) successfully discovers a way to access a parallel universe of pleasure by tapping into the brain’s pineal gland. When he is seemingly killed by forces from this other dimension, his assistant, Dr. Crawford Tillinghast (Jeffrey Combs), is accused of the murder. After psychiatrist Katherine McMichaels (Barbara Crampton) and detective Bubba Brownlee (Ken Foree) take the case, the trio risks a return to the other world in order to solve the mystery.

Produced by Golan – Globus, an affectionate tribute and a cautionary tale of Menachem Golan and Yoram Globus founders of Cannon Films. Hilla Medalia, 2015.

Hellsing is named after and centered around the Royal Order of Protestant Knights originally led by Abraham Van Helsing. The mission of Hellsing is to search for and destroy the undead and other supernatural forces of evil that threaten the queen and the country.

A group of teens are unwittingly stranded near a strange wax museum and soon must fight to survive and keep from becoming the next exhibit. Elisha Cuthbert, Chad Michael Murray, Brian Van Holt, Jaume Collet-Serra, 2005.

A once-celebrated kid detective, now 31, continues to solve the same trivial mysteries between hangovers and bouts of self-pity. Until a naive client brings him his first `adult’ case, to find out who brutally murdered her boyfriend.

A young extraterrestrial, separated from its family and stranded on Earth, finds friendship with a boy in a wheelchair

The discovery of a dead body and a duffel bag full of cash in a hardware store on Christmas Eve drives a crew of screwball employees to the point of mental breakdown and murder. Dave’s (Michael Buonomo) first night on the job is turned upside down as his co-workers drop like flies around him, and the shady staff schemes for easy money.

An excellent & unabashedly Canadian slasher set in a Maritime coal town cursed with a decades-old folk tale about a deranged murderer killing those who celebrate Valentine’s Day. The folk tale turns out to be true! George Mihalka, 1981.

Hunted by the fearsome warrior Sub-Zero, MMA fighter Cole Young finds sanctuary at the temple of Lord Raiden. Training with experienced fighters Liu Kang, Kung Lao and the rogue mercenary Kano, Cole prepares to stand with Earth’s greatest champions to take on the enemies from Outworld in a high-stakes battle for the universe.

An adaptation of the novel “Frankenstein,” as told through the life of Mary Shelley. Nora Unkel, 2020.

A solitary finger pokes out of a drain. Novelty teeth turn predatory. Flies settle and die on an old pair of sneakers in New York, and the Nevada desert swallows a Cadillac. Meanwhile the legend of Castle Rock returns… and grows on you.

While attempting to seduce gorgeous lawyer Diane Lightson (Demi Moore), wealthy gadabout Chris Thorne (Chevy Chase) agrees to drive her to Atlantic City, N.J. But, when some reckless driving draws the attention of a deeply critical cop (John Candy), they and the flamboyant “Brazillionaires” (Taylor Negron, Bertila Damas) who tagged along end up in the court of a grotesque and vengeful judge (Dan Aykroyd), who has a special vendetta against the wealthy and erudite.

A couple of Rudy Ray Moore classics return to the shop!

Back In Stock! One of the videostore’s personal favs of 2021 so far.

Power-hungry Queen Gedren (Sandahl Bergman) captures the priestesses guarding the Talisman, a mystical orb that created and can destroy the world. But one of the priestesses escapes and seeks out her warrior sister, Red Sonja (Brigitte Nielsen), to warn her about Gedren’s plan for world domination. Lord Kalidor (Arnold Schwarzenegger), the Talisman’s keeper, insists on helping Sonja, and though she scorns the assistance of any man, she soon gains respect for Kalidor’s fighting prowess.

An environmentalist venturing into the deep sea to capitalize on the billion-dollar plastic industry encounters deadly enhanced sharks. Katrina Grey, 2021.

Hard-drinking novelist Zach Hutton (John Ritter) spirals out of control after his wife (Alyson Reed) and mistress both leave him. Alone and crippled by a bad case of writer’s block, Zach slips in and out of casual relationships and one-night stands, while his drinking becomes more and more severe. With the help of a bartender (Vincent Gardenia) and his therapist (Michael Kidd), Zach confronts his demons — women and alcohol — and rediscovers his writing voice.

Working in the shadow of his father, Detective Ezekiel “Zeke” Banks and his rookie partner take charge of an investigation into grisly murders that are eerily reminiscent of the city’s gruesome past. Unwittingly entrapped in a deepening mystery, Zeke finds himself at the center of the killer’s morbid game.

In a densely overpopulated, starving New York City of the future, NYPD detective Robert Thorn (Charlton Heston) investigates the murder of an executive at rations manufacturer Soylent Corporation. With the help of elderly academic Solomon “Sol” Roth (Edward G. Robinson), Thorn begins to make real progress — until the governor mysteriously pulls the plug. Obsessed with the mystery, Thorn steps out from behind the badge and launches his own investigation into the murder.

Covert government assassin Al Simmons (Michael Jai White) is killed after being double-crossed by his boss, Jason Wynn (Martin Sheen). Upon arriving in Hell, Simmons is offered an opportunity to return to Earth if he’s willing to lead an evil army. He accepts, and is reincarnated as a “Hellspawn” — a twisted, horribly disfigured version of his former self. However, Spawn serves as a force of good, much to the dismay of the Devil’s henchman, a wicked clown (John Alberto Leguizamo).

A group of teenagers at a party find themselves being stalked by a maniacal killer in a Santa Claus costume. Jennifer Runyon, Forrest Swanson, Linda Gentile, David Hess, 1980.

A Los Angeles taxi driver helps a distraught young woman on the run from gangsters after they murder her husband and young son. Robert Forster, Joe Spinell, Nancy Kwan, 1985.

And there we go guys. Some Studio Films, some documentaries, some exploitation, and just some random things to please the eyes. Should be in on Thursday. Till then always remember the videostore loves you. Cheers!

Another Week And A Few Movie Titles…

A new month keeps bringing us more titles to hit the shelves of the old videostore. Some random goodness shows up this...

And The Year Comes To An End…With Some New Movies Hitting The Shop!

Well the unique year of 2020 is coming to a close and for the most part good I suppose. Anyways the videostore...

Good Evening…We Have Exciting New Titles Coming To The Shop This Week.

First week of October brings all types of goodies to The Lobby DVD Shop so let's dig in and take a look...