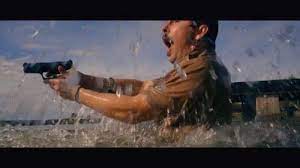 Horror comedy about a devil worshipping woman who employs her “nieces” in a some flirty fishing in order to lure men back to the farm to be ground up into meat pies. Karen Black, Pat Morita, Kristine Rose, Pat Paulsen, Huntz Hall, Michael Berryman, 1992.

Actor Michael Rapaport examines the music of the 1990s hip-hop group, as well as the conflicts that drove the band members apart.

Two cannibalistic brothers kill various young women to use their flesh as part of a new special dish at their run-down restaurant, while also committing blood sacrifices to awaken a dormant Egyptian goddess.

A hungry shark feeds on unsuspecting lake goers in a small Texas town.

Dreaming of becoming a criminal legend like Al Capone or the Kray Brothers, Mark ‘Chopper’ Read spends his life in and out of jail. But his bungled efforts end up more comical than criminal.

In rural 19th-century France, a mysterious, possibly supernatural menace threatens a small village. A pathologist, comes to town to investigate the danger and exorcise some of his own demons in the process. Boyd Holbrook, Kelly Reilly, Sean Ellis, 2021.

After a routine prison transfer crashes in the forest, young Inuit paramedic Melina finds herself surrounded by murderers with a mere 100 feet to climb out of a ditch to escape. Soon, they are attacked by an unseen force in the forest.

The ultimate mausoleum of movie madness unleashing a stupefying serving of delightfully depraved and garishly gory trailer trash from the defining decade of Decadence! Erupting with almost 4 hours of a non-stop body and breast count.

Beloved cult film about a rescue crew investigates a spaceship that disappeared into a black hole and has now returned… from a DIMENSION OF PURE EVIL! Laurence Fishburne, Sam Neill, Kathleen Quinlan, Paul W.S. Anderson, 1997

In this true story from 1890’s Africa, white railroad engineer and a white hunter track down man-eating lions and face down the spiritual challenges of being a colonial citizen in Africa. Michael Douglas, Val Kilmer, Tom Wilkinson, Stephen Hopkins, 1996.

Starring Ice Cube, Pam Grier. In 2176, a Martian police unit is sent to pick up a highly dangerous criminal at a remote mining post. Upon arrival, the cops find that the post has become a charnel house. John Carpenter (2001)

The classic double feature back in stock on it’s 15 years anniversary.

Dr. Génessier (Pierre Brasseur) is riddled with guilt after an accident that he caused disfigures the face of his daughter, the once beautiful Christiane (Édith Scob), who outsiders believe is dead. Dr. Génessier, along with accomplice and laboratory assistant Louise (Alida Valli), kidnaps young women and brings them to the Génessier mansion. After rendering his victims unconscious, Dr. Génessier removes their faces and attempts to graft them on to Christiane’s.

A movie producer hopes to solve the mystery surrounding his wife’s death by inviting the suspects aboard his yacht.

A wealthy married couple invites homeless people to their home to have fun with them. A cruel doctor seeks a new victim for his drug experiments. Then, a SM relationship takes a new turn.

Atmospheric supernatural horror about a young girl living in her town’s vicarage in rural England who is tormented by an ashen coloured girl who does not have her best interests at heart. Ruth Platt, 2021.

n 1866, Django receives the news that he is to return to his hometown in Texas. There he first has to discover that his family’s ranch has been sold to the Scotts and that his brother Jeff has become a drunkard.

In the early 1970s, Kinji Fukasaku’s five-film Battles Without Honor and Humanity series was a massive hit in Japan. This follow-up trilogy tells separate fictional stories about the yakuza in different locations in Japan. (1974, 1975, 1976)

Young workers are dying because of a mysterious epidemic in a little village in Cornwall. Doctor Thompson is helpless and asks professor James Forbes for help. John Gilling (1966)

Welcome to Raccoon City, once the booming home of pharmaceutical giant Umbrella Corp. The company’s exodus left the city a wasteland, a dying town with great evil brewing below the surface. When that evil is unleashed, a group of survivors must work together to uncover the truth behind Umbrella and make it through the night.

A Canadian experimental, multi-media meditation on memory, isolation, identity which tells the story of a beautiful leather-clad humanoid who walks the earth in a dream. Chris Alexander, Ali Chappell, 2020.

In this horror-comedy, a female cop goes undercover as a dancer at an old theatre to catch a serial killer who has been murdering women auditioning for a musical.James Shyman, 1989.

When students in their high school inexplicably start to explode, seniors Mara and Dylan struggle to survive in a world where each moment may be their last. As an unexpected romance blossoms between them, they soon discover that when tomorrow is no longer promised, they can finally start living for today.

Interwoven stories demonstrate that some traditions are best not forgotten as the residents (Anna Paquin, Brian Cox, Dylan Baker) of a small town face real ghosts and goblins on Halloween. Tales of terror reveal the consequences of extinguishing a Jack-o-Lantern before midnight and a grumpy hermit’s encounter with a sinister trick-or-treater.

A homeless veteran battles to survive against his demons in the remote Highlands of Scotland.

The mythic cult film from Ryûhei Kitamura in both its original 2000 and expanded 2004 Ultimate Versus iterations, in a brand new, director-approved restoration.

As the president of a trashy TV channel, Max Renn (James Woods) is desperate for new programming to attract viewers. When he happens upon “Videodrome,” a TV show dedicated to gratuitous torture and punishment, Max sees a potential hit and broadcasts the show on his channel. However, after his girlfriend (Deborah Harry) auditions for the show and never returns, Max investigates the truth behind Videodrome and discovers that the graphic violence may not be as fake as he thought.

A horror comedy with fake news and commercials section, that was filmed on old video cameras to make it look like a real VHS recording of a commercial television station’s Halloween special from 1987. 2013.

Desperate to help her ailing brother, a young woman unknowingly agrees to compete in a deadly game of “Would You Rather,” hosted by a sadistic aristocrat. Brittany Snow, Jeffrey Combs, Robb Wells, Jonny Coyne, Sasha Grey, 2012.

And there we go guys…a little bit of thisi and that hitting the shop this week. Hope you all have a glorious day and we’ll see you down the road at the old videostore. Cheers!

Get yours today, only 20 buck at the Shop!

Women Rule The Genre Filmscape At DEAD BY CON 2020!

On March 14th and 15th the second annual DEAD BY CON hits the SawRidge Inn (4235 Gateway BLVD.) and this year puts...

Good people! On Saturday, Sept. 14th my good friends at The Video Void are presenting a fun double feature screening night to...