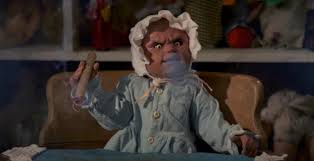 Hey guys, we are in mid summer form with sweet physical Media hitting the shop and this week we got quiet the collection of odd, forgotten, and bizarre beauties coming in. Many will be a collector’s good time as most of the titles are going back a few decades to remind you of the old school mom and pop videostore days before the dark times, the Blockbuster times. Either way let’s take a look shall we?

Likable horror-comedy about a family on vacation ends up in a town full of weirdos. Buck Flowers, Edy Williams, Mitchell Linden, 1988.

Beloved Full Moon Demonic Toy gets its own movie in this tale of revenge! William Butler, 2021.

In Scotland in 1994, two teenage boys are best friends with no control over their lives. They decide to risk everything to attend an illegal rave, hoping for the best night of their boring lives.

Firstborn Lorens (Phillip Salvador) toils the land by buffalo while Ellis (Christopher de Leon), the apple of his mother’s eye, is given a university education in Manila. When the latter returns to the family’s hacienda with a metropolitan fiancée in tow (Carmi Martin), the domineering Señora Pina (Mona Lisa) immediately disapproves. Looking to reassert her influence, she asks her youngest to name his inheritance. Ellis claims the land – which sparks a family feud that invites tragedy and boils over into all-out filial war.

BACK IN STOCK! After finding an old rifle, a young boy joins the Soviet resistance movement against ruthless German forces and experiences the horrors of World War II. Elem Klimov, 1985.

Madeleine has just endured a traumatizing miscarriage. Finding herself increasingly lost in bizarre nightmares, she begins to question her life and happiness, taking refuge in extra marital affairs and unstoppable hedonism.

Michael Cimino directs this remake of the 50’s Bogart film about an escaped convict who hides out in a married couple’s home making their lives a living hell. Mickey Rourke, Anthony Hopkins, Mimi Rogers, 1990.

A richly atmospheric adaptation of the hard-boiled novel by Walter Mosley, a jobless ex-GI who finds himself embroiled in murder, political intrigue, and a scandal that crosses the treacherous colour lines of a segregated society. Denzel Washington, 1995.

A woman opts for a cloning procedure after she receives a terminal diagnosis but when she recovers her attempts to have her clone decommissioned fail, leading to a court-mandated duel to the death. Karen Gillan, Aaron Paul, Riley Stearns, 2022.

BACK IN STOCK! This French Sci-Fi classic is a bizarre and beautifully animated futuristic story on a faraway planet, where blue giants rule and oppressed humanoids rebel against the machine-like leaders. René Laloux (1973)

King (Craig Sheffer, Night Breed) and Tyn (Josh Charles, Four Brothers) are inmates in a North Carolina prison who overhear the story of “The Grave”, which promises buried treasure to anyone daring enough to embark on its quest. Naturally, the two break out of prison with the intent to dig up the mysterious loot, only to end up in a twisty crime and horror filled saga involving fellow criminals, old flames and a character known only as “The Priest” played by Keith David (They Live).

Another sweet GIALLO BOXSET hits the shop with 3 lost films from the bygone era! Includes: SMILE BEFORE DEATH / THE WEAPON, THE HOUR, THE MOTIVE / THE KILLER RESERVED NINE SEATS

Part of the extended Gingerdead Man / Evil Bong extended universe. GingerWeed Man returns in this film as a successful dispensary delivery service owner but has a series of misadventures when he protects a mysterious super strain weed dude from harm. 2021

Set in the changing world of the late 1960s, “Girl, Interrupted” is the searing true story of Susanna Kaysen (Winona Ryder), a young woman who finds herself at a renowned mental institution for troubled young women, where she must choose between the world of people who belong on the inside — like the seductive and dangerous Lisa (Angelina Jolie) — or the often difficult world of reality on the outside.

Branded a traitor by her country, a French national is rescued by American soldiers on one condition: to survive, she must lead them to a cache of gold hunted by the Nazis, the French resistance, and the Americans! Alina Andrei, Nina Bergman, 2021.

A twisted tale of delinquency pushed to its horrifying extreme, where Class of 1984 meets I Spit on Your Grave! Christopher Cousins, Christopher Stryker, 1989.

Lately, Ben hasn’t been sleeping well. His dreams are filled with violent and terrifying visions of monsters and death. Seeking out answers, he begins to pursue the subtext and hidden meanings of his strange and terrifying nightmares, with the help of his professor and several friends. As the dreams grow increasingly lifelike, Ben fears that he’s losing his grip on sanity, especially as those around him start turning up dead; horribly mutilated just like he’s seen in his sleep…

Weird things are happening in and around the Wild Goose Lodge, a snowy inn located in rural Massachusetts. People are being found dead and mutilated, while others are vanishing without a trace. Realizing that the violence might have something to do with Native American black magic and the ancient secrets of the area’s historic totem poles, a trio of cops decide to investigate the goings on, and are faced with an array of monsters, ghouls, and even a sampling of murderous locals!

A group of college students have been given a very unusual assignment: spend the night inside of a supposedly haunted house, as part of their studies into the supernatural and occult. Although the rag tag team of collegiates would much rather party and get stoned than look for ghosts, it’s not long before unexplained events begin to occur. Initially suspecting that some of their classmates might be playing a practical joke, their fears are proven very real when someone – or something – dressed in robes and carrying a scythe starts bumping them off one by one.

BACK IN STOCK! Starring Sam Neill and Jürgen Prochnow, an insurance investigator begins discovering that the impact a horror writer’s books have on his fans is more than inspirational. John Carpenter (1994)

BACK IN STOCK! A pharmaceutical scientist creates a pill that makes people remember their happiest memory, and although it’s successful, it has unfortunate side effects.

Predating Blair Witch by a year, this found footage horror follows a film crew ventures into the forest in search of the mythical ‘Jersey Devil’. Stefan Avalos, Lance Weiler, 1998

Fame-seeking members of the animal kingdom experience the sleazier side of show business in this puppet-filled parody.

BACK IN STOCK! In a small Korean province in 1986, two detectives struggle with the case of multiple young women being found raped and murdered by an unknown culprit. Bong Joon Ho, 2003.

Set in the 1950s, a mother flees from her abusive ex-husband and takes their son with her but their new home may be haunted by a monstrous creature. Christina Ricci, Colleen Camp, 2022.

Gory and sleazy cult film about a cannibal rapist rises from the grave as a flesh-eating zombie sex maniac! Matt Jaissle, 1997.

Dennis Hopper directs & stars in this story of a young girl whose father is an ex-convict and whose mother is a junkie finds it difficult to conform and tries to find comfort in a quirky combination of Elvis and the punk scene. Linda Manz, Sharon Farrell.

Two inseparable friends from the southern suburbs of Sydney try to make their mark in the surfing community, seeking experience and acceptance.

BACK IN STOCK! When a fast food chicken restaurant is built on the site of an ancient Native American burial ground, the displaced spirits unite with the ghosts of exterminated chickens and transform into Native American chicken zombies seeking revenge!

BACK IN STOCK! In this French horror, a young woman, studying to be a vet, develops a craving for human flesh. Julia Ducournau, 2016.

LIMITED EDITION! Determined to atone for the suffering brought upon his people during the Trail of Tears, a Cherokee elder engaged in dark magic to summon an ancient demon to take revenge! Eric Stanze, 1994.

A promiscuous man’s adulterous ways cause him to learn a difficult lesson in love when he loses his eyesight and his new wife.

An alien invasion starts just outside a small Inuit community in the Arctic and humanity’s first line of defence proves to be a group of Inuit girls armed with nothing but their wits & a bunch of traditional hunting and fishing tools. Nyla Innuksuk, 2022.

High school girls enjoy a slumber party with pillow fights, pizza and horror movies until their best night of the year turns into a nightmare when a real-life maniac shows up.

LIMITED EDITION. A woman enlists the help of a cop to find her sister who has been kidnapped by Satanists hoping to bring about the end of the world by unleashing the demon Moloch. Gary Marcum, 1988.

LIMITED EDITION. High school student Sam Adams has just moved to a new house in a sleepy, all-American town. His new school seems perfect at first and he is quickly accepted onto the football team. But something about his fellow players seems a bit off, particularly the brutish and arrogant Jack “Boot” Butkowski.

And there we go guys. Hope you are as excited about some of these titles coming as the videostore is. Till then…Cheers!

Reflecting on growing up in the videostores is always fun. I never try to come off like the old man telling you...

Time To Stock Up For The Long Haul My Friends…

Well guys, we are all hunkered down in one way or another. Myself, I seem to be doing isolation in two location...

Well this will be the last shipment of the month dear friends and I think we got some bangers heading our way...