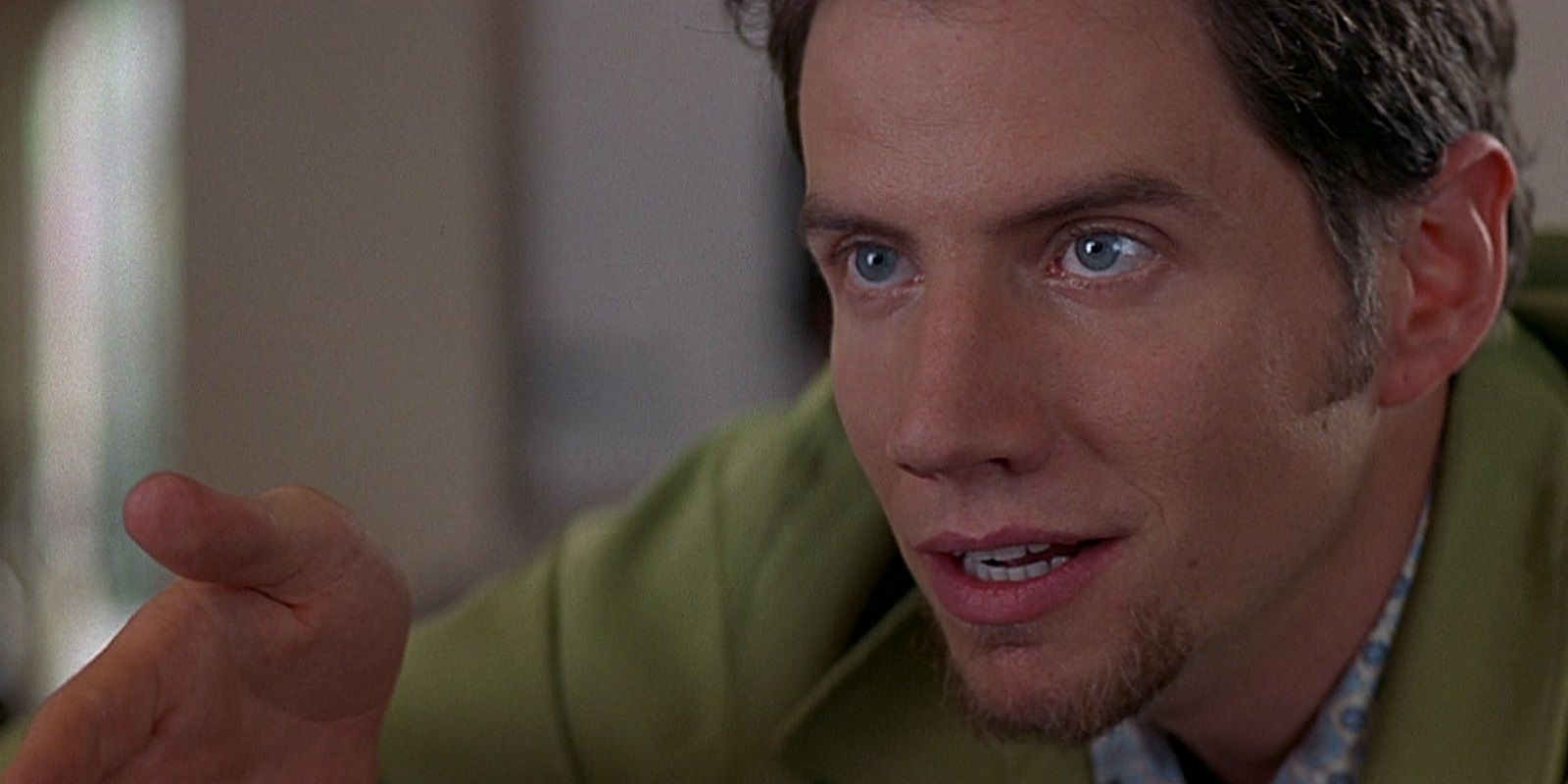 The 1990s started off pretty weak as a horror movie fan going to theaters back then. Aside from the rare gems that hit our screens like Candyman, Bram Stoker’s Dracula, Body Parts, and the latest decent Stephen King Adaption horror in mainsteam cinema was dead. But luckily on a fluke all that changed in Decemeber of 1996…

Little did 20 year old me know at the time as I went to this 2 week advance screening of a new Wes Craven film I was about to witness the rebirth of mainstream horror cinema for better or worse. That night it was brilliant.The Internet was such a new thing that no leaks or buzz were made about this film. Infact after Craven’s last two movies (Vampire In Brooklyn, New Nightmare) our expectations were low. All we knew at the time was it starred Drew Barrymore and was a throwback slasher film. All I can personally say is after leaving the theater that night our nerd minds were blown away. Like a breath of fresh air life had been brought back into a genre of film that I had adored since the early 80s and VHS. The slasher genre was back but with a twist.

So much originality and greatness came from the first SCREAM film with all the references, twists, and tropes, but not to be lost were the great 3 dimentional characters. For the slasher genre this was a breath of fresh air. For me personally, surprise, surprise, seeing a character such as Randy Meeks was beyond great. As a guy working at a videostore, knowing his horror movies at the time, and simply being ahead of knowing what was going on compared to the rest of the cast I felt like I finally was seeing a film character I personally could relate to.

As we watch the first movie the character of Randy Meeks works his way into the hearts of every horror movie nerd. Jamie Kennedy’s acting made us think we were him. We, like him, knew shit was going on. We knew something was rotten in the state of California as the plot progressed. He was warning us the entire time because he knew.

As the first SCREAM came to it’s mind blowng climax with it’s twists and turns us as the audience were beyond committed to this meta post mordern slasher plot. And the biggest reason why? Randy “The Horror Movie Nerd” Meeks was our guide. Forget Stu, Dewey, Sidney, Gale, and every other character in the film. Randy was us. And Randy knew the rules. And because of that, even with a close call gun shot wound, he lived. And honestly, he deserved to.

Now let’s bring on 1997 with SCREAM 2. After the smash hit original film broke all box office expectations a sequel was a given. Between Kevin Williamson and Wes Craven they had little time to write and make SCREAM 2 before it’s release date literally 12 months later. The holiday season of 1997. Now it was a given everyone that lived would return to the follow up. And even though the three main characters and probably highest paid actors were indeed Neve Campbell, David Arquette, and Courtney Cox there was again the return of Jamie Kennedy’s endearing Randy Meeks character in the sequel. Now in college Randy was just as big of a movie nerd as ever but on a more excepted film school playing field.

In Scream 2 we get hints that Randy is still obsessed with the biggest crush on Sidney. As I watched the second movie opening night in the theatre I will always remember the line Randy gives us when asked how would you end the movie. His answer early in the film was “In my endinjg the geek would get the girl”. Every horror movie nerd and outcast in the cinema that night was given hope that he may have predicted how this film would end. Because as much I like Jerry “Stand By Me” O’Connell his character was kinda boring as Sidney’s “do I trust him or not” boyfriend. Even the humourous banter between Randy and David Arquette’s Dewey character in the middle of the film kept us feeling safe for our beloved videostore nerd. How wrong we were.

In what must be the most bi-polarizing moment of the entire franchise, and yes I’m dead serious, the writer and director decided to kill off Randy Meeks in the most silly broad daylight stupid fashion ever. As he is chatting with the killer on his phone he gets grabbed, dragged into a van, and stabbed to death by Roseanne’s sister Jackie while a group of hip hop music fans walk by with a boom box blasting it’s loud tunes to block out all the screaming. I can personally tell you it was this moment when the SCREAM franchise died.

Wes Craven was always an honest man. He told it like it was reflecting on all his work. When it came to the SCREAM franchise between himself and Kevin Williamson they always regretted killing Randy Meeks off. In the same way that George Lucas never knew what a fan favourite Bobo Feet would become Craven and Williamson were the same towards Randy Meeks. But from my own point of view sitting in the theatre for Scream 2 I emotionally checked out from the rest of the film that night. I did not care if Dewey, Sid, or Gale lived or died. You killed Randy. You sons of bitches. Don’t get me wrong. I still enjoy the film and 22 years later SCREAM 2 is a solid sequel but on that cold December night in 1997 myself along with a bunch of nerds in that cinema felt the makers betrayed us. You could have killed off Neve or Courtney instead and we would have been cool with it. Because deep down we were RANDY MEEKS and we wanted that happy nerd ending to see him and SID together. Was that too much to ask? I guess it was.

And how do we know the creators knew they made a mistake? Look no further than SCREAM 3. Now, in fairness, the third entry had problems that had nothing to do with the film itself. 1999 was the year of the Columbine shootings. You know, that one school shooting that happened in the USA? Anyways, after that the film industry was hit hard and everything related to horror films that year was heavily censored. SCREAM 3 was no exception. Regardless of the lack of blood in the film Craven wanted to give something back to the fans…RANDY MEEKS. His one big regret.

How would he do it? Well, a poorly written idea. Since there was no time travel or dream sequences in the SCREAM universe he came up with a cameo for Randy in the form of a VHS recording of the character warning the remaining original cast that if another killer is out there it’s now a trilogy and one of you will not make it. Ironically they all made it. Deep down I had always hoped since we jumped the shark at this point maybe they could have shocked us and revealed Randy was still alive and in the end the ultimate GHOSTFACE killer. Now that is a stupid as hell but an enjoyable twist I could have smiled at. Better than the reveal of the killer in SCREAM 3 and killers in SCREAM 4. Either way these are just the rambling thoughts of a videostore guy in 2019 reflecting on his movie going days in the mid 90s. I will always love the SCREAM franchise but how much more would I have loved it if Randy Meeks would have lived….atleast till the end of SCREAM 3 anyways. Is that asking too much? You tell me.

Till next time my friends…love ya. Support your local video store. Cheers!

Another glorious week of the forgotten, new, bizarre, intriguing, and simply classic cinema is upon as the videostore continues to do it's...

The Fall Breezes In And So Do More Films…

Well kids..it's another edition of movie magic and this week's big one is the creator of the Midnight Movies. 50 years ago...

Shaw Intern Amor Dardouri takes us a little trip to a local Video store that specializes in Horror.