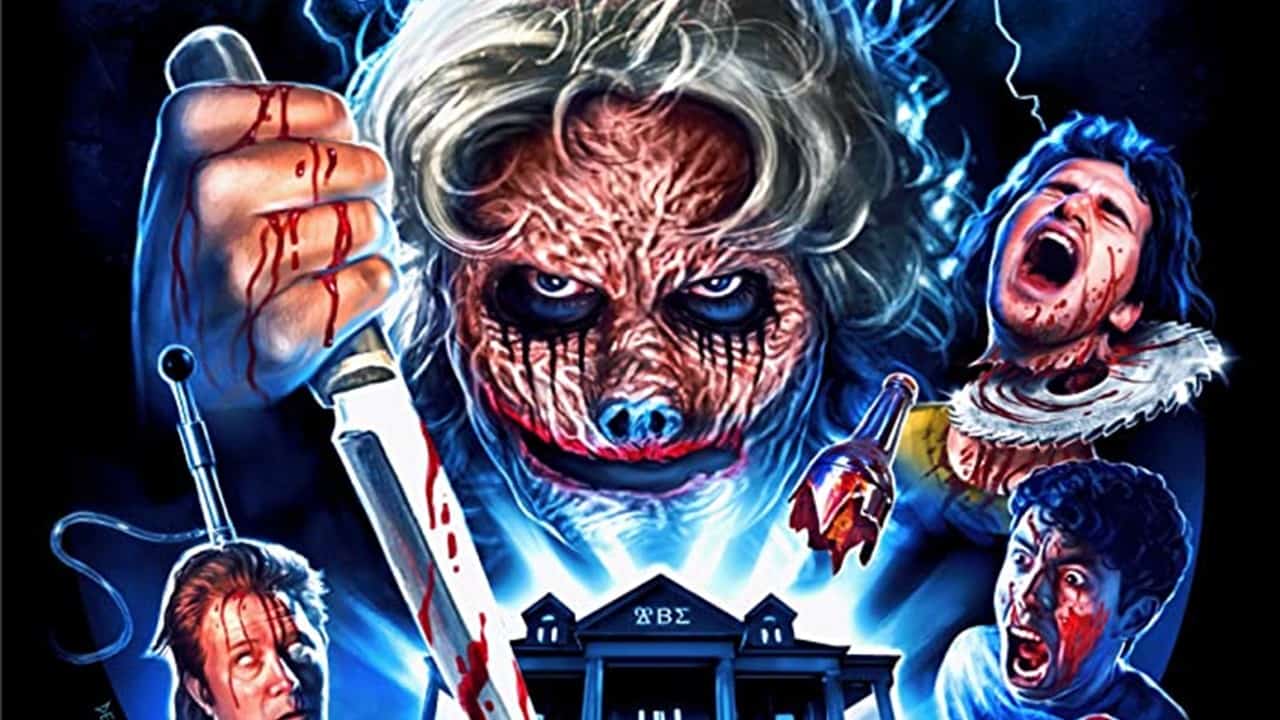 Over the last few years many horror satires or spoof have come out. Some from big budget studios and others being independant. DUDE BRO PARTY MASSACRE III is more indie than most unlike most does a great and low brow job of hitting the nail on the head when it comes to spoofing the 80s slasher genre. While it has been in the shop before and we have even had bar screenings of it it has been a while since it was heavily stocked in the shop but here we are this week as it leads the charge of this week’s new releases. And for those not familiar with the film…no, there is no part 1 and 2. It’s part of the joke. Now let’s look at the list shall we?

Halloween keeps getting closer so always good to stock up on those Halloween horror anthologies early.

A black comedy slasher film about a circus clown going on a murderous rampage after being wrongfully accused of rape. Georgia Chris, Joe Davison, Jack Amos, and Raine Brown, 2013.

Awesome throwback double feature! “You say Barracuda people go what? Huh? You say shark and we got a panic on our hands on the fourth of July.”

A teenager’s weekend at a lake house with her father takes a turn for the worse when a group of convicts wreaks havoc on their lives.

Back In Stock! Based on Clive Barker’s horror legend The Candyman, a murderous soul with a hook for a hand, is accidentally summoned to reality by a sceptical grad student researching the monster’s myth. Bernard Rose (1992)

From 1982 this gross bug movie hits the shop. A crazed evil wizard uses his powers to take revenge on beautiful women by making them vomit up live centipedes, which then proceed to eat their victims. Yikes.

Back In Stock! 80’s horror about 8 teenagers trapped after hours in a high tech shopping mall pursued by murderous, out of control security robots. Jim Wynorski, 1986.

Back In Stock! Mexican remake of the cult favorite Remake of Who Can Kill a Child? Daniel Giménez Cacho, Ebon Moss-Bachrach, Vinessa Shaw, Makinov, 2012.

Back In Stock! A mysterious virus hits an isolated elementary school, transforming the kids into a feral swarm of mass savages. An unlikely hero must lead a motley band of teachers in the fight of their lives. Elijah Wood, Rainn Wilson, Alison Pill, 2014.

Back in Stock! A newcomer to a Catholic prep high school falls in with a trio of outcast teenage girls who practice witchcraft, and they all soon conjure up various spells and curses against those who anger them.

Back in Stock! Because you can never have too much Creepshow!

Back In Stock! The chilling story of identical twin gynecologists who share the same practice, same apartment and the same women. When a new patient challenges their eerie bond, they descend into a whirlpool of sexual confusion, drugs and madness. Jeremy Irons.

Back In Stock! A routine military exercise turns into a nightmare in the Scotland wilderness.

Back In Stock! The complete collection of Universal Studies Dracula series.

Finally Back In Stock! In the wake of two back-to-back mass murders on Chico’s frat row, loner Brent Chirino must infiltrate the ranks of a popular fraternity to investigate his twin brother’s murder at the hands of the serial killer known as “Motherface.”

Back In Stock! The rural community of Paddock County is being rocked by the crazed exploits of an axe-wielding psychopath, who stalks the night in a black trenchcoat and mask. José Ramón Larraz (1988)

Back in Stock! Upon arriving in a small town where she has inherited a rundown mansion, a famous horror hostess battles an evil uncle, and townspeople who want her burned at the stake. James Signorelli (1988)

A paranormal investigator investigating the mysterious death of a old girlfriend he discovers she fell victim to the Batibat, an ancient evil that followed her home from the Philippines. 2020.

Back In Stcok! Aussie action, a young woman running a wildlife sanctuary in the Australian outback fights off a group of poachers who mistakenly think she is easy prey. Mario Andreacchio (1986)

Back In Stock! The original FLY trilogy with a ton of bonus material included.

Back In Stock! A Northern California fishing community, built over an old leper colony, is the target of revenge by a killer fog containing zombies rising from the sea to take revenge for their deaths. Adrienne Barbeau, Jamie Lee Curtis, Janet Leigh, John Carpenter.

Back In Stock! A teenager discovers that the newcomer in his neighborhood is a vampire, so he turns to an actor in a television horror show for help dealing with the undead. Tom Holland (1985)

Back In Stock! German horror, Two violent young men take a mother, father, and son hostage in their vacation cabin and force them to play sadistic “games” with one another for their own amusement. Michael Haneke (1997)

back in Stock! In this gory Canadian horror film a bunch of bored millennials decide to play a horror board game with violent results. Laurence “Baz” Morais, Sebastien Landry, 2017.

Back In Stock! The 80s Sci-fi/ Action cult classic returns. From The Director of Nightmare On Elm Street 2 and featuring some badass practical effects. Personal favourite from the videostore.

Back In Stock one of my personal favs! Donald Sutherland and Jeff Goldbloom star in this sci-fi classic set in San Francisco, where a health inspector discovers the human race is being replaced with clones devoid of emotion. Philip Kaufman (1978)

A gogo dancer quantum-leaps into the body of Jesus. She doesn’t believe that the experience is real, so she has fun altering biblical events.

Back in Stock! A series of short, highly irreverent, and quite often tasteless skits? It’s the legendary first film from the creators of Airplane! John Landis directs. 1977.

Back in Stock! Indonesian action/horror insanity! A sexually rapacious Asian undersea goddess possesses the body of a young female skin diver and then goes on murderous & sexual rampage! Jalil Jackson, 1989.

Back In Stock! Comedy legends Burt Reynolds in his final role and Chevy Chase star in a hilarious and heartwarming journey following one man’s achievement over a lifetime. Adam Rifkin (2017)

Back in Stock! Two lighthouse keepers try to maintain their sanity whilst living on a remote and mysterious New England island in the 1890s.

Rare shot-on-video horror movie about a woman who makes a descent into Hell after she kills a man she brought home as a one-night stand. Tina Krause, 1999.

2 Disc special edition. A group of young friends take a trip overseas to party and stumble upon a local mob’s sadistic torture shows. 2006.

Back in Stock! Based on the best-selling manga series, the six intensely kinetic Lone Wolf and Cub films elevated chambara to bloody, new heights. Tomisaburo Wakayama.

Back in Stock! A supernatural, maniac killer cop teams up with a Times Square serial killer to get the revenge on those who killed him in prison. Written by Larry Cohen. Robert Davi, Claudia Christian, Michael Lerner, Willian Lustig, 1990.

Back in Stock! One of my favourite John Goodman acting gigs! A small-time film promoter releases a kitschy horror film during the Cuban Missile Crisis.

Back in Stock! Raucous spoof/tribute to ’50s-era matinees features alien brain parasites who enter humans through the mouth and turn their host into flesh-eating zombies!. Fred Dekker (1986)

Back in Stock! The quintessential silent vampire film, remastered in high definition for the first time.

Back In Stock! After being kidnapped and imprisoned for fifteen years, Oh Dae-Su is released, only to find that he must find his captor in five days.

Sweet blu Ray double feature from the 80s! You can never go wrong with these sets.

This movie just celebrated it’s 30th birthday and it’s back in stock! Mark runs a pirate radio station and causes an uproar when he speaks his mind and enthralls fellow teens.

First 5 volumes of the brilliant 80s cartoon with some of those episodes actually creeping me out at a young age.

Back in Stock! Japanese horror. A reporter and her ex-husband investigate a cursed video tape that is rumored to kill the viewer seven days after watching it. Hideo Nakata (1998)

All three of the Firefly Family flicks in one set!

O’Hara is a mercenary leading a squad of soldiers on their mission to rescue hostages in remote part of Africa. Unfortunately the mission goes wrong and the team are stranded, forced to survive against the local rebels.

Back In Stock! This beauty took me by surprise this year. An Irish creature feature that borrows from The Thing in a really good way.

Oliver Stone’s nuts cult debut film about a struggling writer tormented by the same weird dream in which a dwarf, a big mute executioner and a Vampira/Elvira clone kill his family and house guests. Jonathan Frid, Mary Woronov, Herve Villechaize, 1974.

Special Edition Blu Ray of Cronenberg’s classic! The residents of a suburban high-rise apartment building are being infected by a strain of parasites that turn them into mindless, sex-crazed fiends out to infect others by the slightest sexual contact.

Back in Stock! An insidiously addictive, low-calorie dessert sensation takes over the minds of all who eat it in this fun cult film from B-movie master, Larry Cohen. Michael Moriarty, Paul Sorvino, 1985.

Stocking up on these copies because god knows it might go out of print again and Halloween is getting closer.

Back in Stock! When strange events occur in a neighborhood in Buenos Aires, a doctor specializing in the paranormal, her colleague, and an ex police officer decide to investigate further.

Back in Stock! A French couple staying in a rambling country estate in Romania are terrorized by an unknown menace in this claustrophobic, pitch-perfect exercise in horror. David Moreau, Xavier Palud, 2006.

Back In Stock! A crew of oceanic researchers working for a deep sea drilling company try to get to safety after a mysterious earthquake devastates their deepwater research and drilling facility located at the bottom of the Mariana Trench.

Back in Stock! A group of war veterans must defend their local VFW post and an innocent teen against a deranged drug dealer and his relentless army of punk mutants. Joe Begos (2019)

From 1981…Three lovely waitresses contend with a drunken, slovenly chef and mutinous patrons.

Back in Stock! Starring Nicolas Cage, Laura Dern, and Willem Dafoe, Young lovers Sailor and Lula run from the variety of weirdos that Lula’s mom has hired to kill Sailor. David Lynch (1990)

And there it is for the week…lots of fun stuff coming to cram up the videostore shelves. Always choices old and new to be had at the last videostore in Edmonton. Hope to see you later in the week. Cheers! This batch of cinema should be here on Thursday…should be.

An 80s Cult Classic Returns To The Shop…

As the month comes to a close the videostore is loading up the shelves with a tone of beaauties. Personally the shop...

Well guys, the strange times continue and I will do my best to keep some nomality in all of this the only...

Another Week Of Goodness For Your Movie Going Needs…

Well Summer is offically here and with no real blockbuster movies hitting the movie theaters yet it is up to the other...