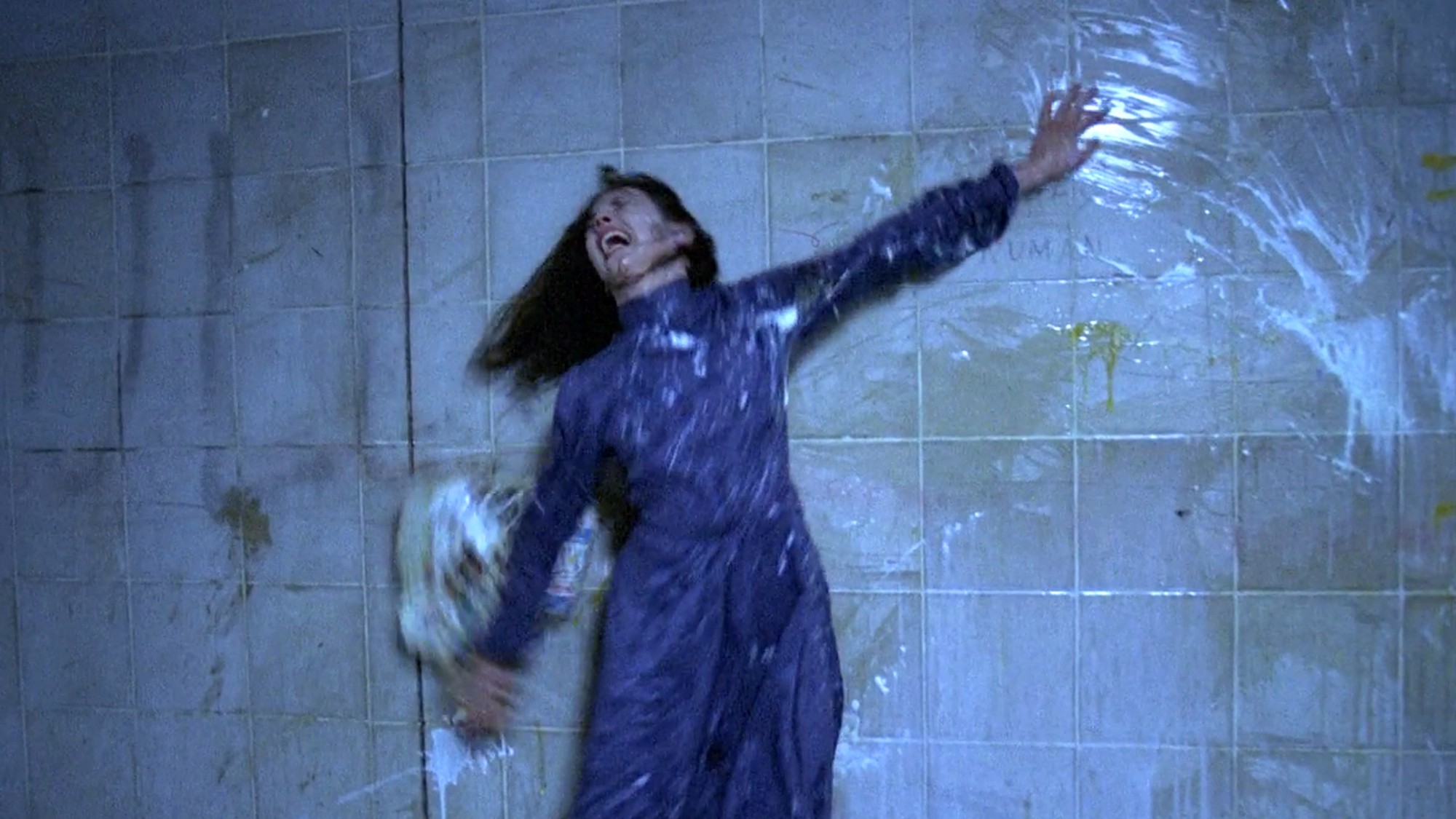 Well another year is upon us and the videostore continues to survive in the year 2022. Crazy! Still doing physical media in the year of Soylent Green. Never saw that coming. Anyways let’s see what gems are coming into the shop this week shall we?

A deranged Santa slayer leaves behind a grisly trail of mutilated bodies as he heads towards the town’s most feared home.

BACK IN STOCK! From the director of the cult classic the Hidden, a horror about a quartet of murderous psychopaths who break out of a mental hospital during a blackout and lay siege to their doctor’s house. Jack Palance, Donald Pleasence, Martin Landau, 1982.

Some teenagers celebrate the anniversary of an axe murderer’s death, then find themselves face to face with the legendary creature.

H.P. Lovecraft story of murderous fish people where a boating accident runs a young couple ashore in a decrepit Spanish fishing town which they discover is in the grips of an ancient sea god and its monstrous half human offspring. Stuart Gordon (2001)

Lonely teenage genius has two best friends: his remarkable robot and the beautiful girl next door. When tragedy strikes both he rebuilds them with frightening results! Matthew Labyorteaux, Kristy Swanson,Wes Craven, 1986.

In the not-too-distant future against a backdrop of advanced undersea technology, a group of scientists and Navy personnel discover they are in an underwater Alien rip-off. Greg Evigan, Miguel Ferrer, Nia Peeples, Sean S. Cunningham, 1989.

BACK IN STOCK! Honestly one of the best triple packs for sweet Stallone action!

A young woman’s ghost investigates and takes revenge for the mysterious events that led to her own murder. Colin West, 2021.

Fisher (Michael Elphick), an ex-detective, decides to take one final case when a mysterious serial killer claims the lives of several young girls. Fisher, unable to find the culprit, turns to Osbourne (Esmond Knight), a writer who was once respected for his contributions to the field of criminology. Fisher begins to use Osbourne’s technique, which involves empathizing with serial killers; however, as the detective becomes increasingly engrossed in this method, things take a disturbing turn.

A psycho killer shows up on a college campus to slash up pretty co-eds and dumb jocks. Jimmy Huston, 1981.

Maverick writer/director Ralph Bakshi made his feature-length film debut with this audacious foray into adult-content animation, creating one of the most successful animated features of its time! 1972.

Canadian comedy about a drummer / chauffeur engaged to a congressman’s daughter who encounters a sleazy film director, the leader of an aerobics cult, & other crazed characters during the lead up to his wedding. Eugene Levy, John Candy, 1983.

BACK IN STOCK! Patrick Stewart features in this horror thriller where, after witnessing a murder, a punk rock band is forced into a vicious fight for survival against a group of maniacal skinheads. Jeremy Saulnier (2015)

New 4K transfer! Picking up exactly where the first film left off, Halloween II follows the same ill-fated characters as they encounter the knife-wielding maniac they left for dead in the first film!

Gaspar Noé’s brutal and shocking French film is BACK IN STOCK! Released after being imprisoned for assault, a Frenchman finds himself impoverished, alienated and angry.

One of the greatest spy thrillers of all time! An ex-thief reluctantly working as a secret agent, has been called in to investigate a strange kidnappings among a number of leading scientists who reappear days later addled and useless. Michael Caine, 1965

A murderous serial killer returns as a mutant snowman to exact his revenge on those who sentenced him to death. Scott MacDonald, Michael Cooney, 1997.

BACK IN STOCK! Starring William Shatner, in rural Arizona countless killer tarantulas are migrating through a farm town, killing every living thing in their path. The town’s veterinarian will do everything in his power to survive the onslaught. John ‘Bud’ Cardos (1977)

BACK IN STOCK! A teenager’s quest to launch Norwegian Black Metal in Oslo in the early 1990s results in a very violent outcome. Jonas Åkerlund (2018)

The luxurious villa of Mark and Jessie Bannister, a yuppie couple, is overrun by loads of uninvited guests who turn the house up side down. John Larroquette, Kirstie Alley, Alison LaPlaca, John Diehl, Jessica Lundy, Bradley Gregg, Dennis Miller, 1990.

In 1920 an archaeological expedition discovers the tomb of an ancient Egyptian child prince. Returning home with their discovery, the expedition members soon find themselves being killed. John Gilling (1967)

BRAND NEW HD RESTORATION IN 4K! Investigating a series of Las Vegas murders, Carl Kolchak discovers that each victim has been bitten in the neck and drained of blood! Darren McGavin, Dan Curtis, 1972.

BACK IN STOCK! A young man set up as the fall guy in a string of brutal slasher murders decides he’ll hide by sneaking into the forbidden subterranean realm of Midian where shape-shifting beings – The Nightbreed – dwell. Craig Sheffer, David Cronenberg, Clive Barker.

After a global nuclear war, the residents of Australia must come to terms with the fact that all life will be destroyed in a matter of months. Based on Nevil Shute’s popular novel. Gregory Peck, Ava Gardner, Fred Astaire, Stanley Kramer, 1959.

Dr. Atsuko Chiba works as a scientist by day and, under the code name “Paprika,” is a dream detective at night. Atsuko and her colleagues are working on a device called the DC Mini, which is intended to help psychiatric patients, but in the wrong hands it could destroy people’s minds. When a prototype is stolen, Atsuko/Paprika springs into action to recover it before damage is done

BACK IN STOCK! After Anna (Isabelle Adjani) reveals to her husband, Mark (Sam Neill), that she is having an affair, she leaves him and their son. Mark is devastated, and seeks out Heinrich (Heinz Bennent), the man who cuckolded him, only to receive a beating. After a series of violent confrontations between Mark and Anna, Mark hires a private investigator to follow her. Anna descends into madness, and it’s soon clear that she is hiding a much bigger secret — one that is both inexplicable and shocking.

Beloved cult horror about a group of teens who inadvertently kill the child of a backwoods witch who unleashes a monstrous demon called Pumpkinhead to exact her revenge. Lance Henriksen, Jeff East, Stan Winston, 1988

James Gillespie (William Eadie) is 12 years old. The world he knew is changing. Haunted by a secret, he has become a stranger in his own family. He is drawn to the canal where he creates a world of his own. He finds an awkward tenderness with Margaret Anne (Leanne Mullen), a vulnerable 14 year old expressing a need for love in all the wrong ways, and befriends Kenny (John Miller), who possesses an unusual innocence in spite of the harsh surroundings.

Curious kids unearth the barrels that helped revive the dead of the first film, which proves the second time’s an undead charm. Ken Wiederhorn (1988)

Tensions rise within an asbestos cleaning crew as they work in an abandoned mental hospital with a horrific past that seems to be coming back. David Caruso, Stephen Gevedon, Paul Guilfoyle, Brad Anderson, 2001.

At a roller disco competition, two rivals find themselves becoming good friends while competing for a prize of one thousand dollars in cash. Scott Baio, Flip Wilson, William A. Levey (1979)

A Belgian nun fond of making up her own songs, Sister Ann (Debbie Reynolds), pens a catchy tune for a sad young local boy (Ricky Cordell). Surprisingly, the song, “Dominique,” becomes a hit after the resourceful Father Clementi (Ricardo Montalban) seeks the promotional assistance of music producer Robert Gerarde (Chad Everett). Soon Sister Ann is a pop sensation, with the media attention and a potential long-term performing career leading her to question her spiritual vows.

A California teen’s worst nightmares about his parents come true when he returns home to find a grotesque party in full swing.

BACK IN STOCK! Based on the beloved video game franchise, a mercenary and his team attempt to liberate hostages from the megalomaniacal General Bison. Jean-Claude Van Damme, Raul Julia, Ming-Na Wen, 1994.

IMPORT BLU RAY EDITION! Brooklyn plumbers Mario and Luigi get the shock of their lives when they discover a parallel world populated by the intelligent descendants of dinosaurs. It seems they weren’t destroyed by a meteor millions of years ago but hurled into another dimension and, now, they have plans to rule our world. It’s up to our unlikely heroes to battle the evil King Koopa and his Goomba guards, free the beautiful Princess Daisy and save mankind in this adventure of a lifetime.

Essential Italian horror classic, a newcomer to a prestigious ballet academy comes to realize that the school is a front for something sinister amidst a series of grisly murders. Dario Argento (1977)

A group of teenagers get into a car crash in the Texas woods on prom night, and then wander into an old farmhouse that is home to Leatherface and his insane family of cannibalistic psychopaths. Kim Henkel (1994)

Poor mutating Glenn Manning, “The Amazing Colossal Man,” is back and this time in rural Mexico insane, disfigured and desperately hungry! Bert I. Gordon, 1958.

And there we go guys..some interesting gems and some best sellers returning to the shop this week. No better to fight the cold than with some cult classics or maybe a title you never heard of before. Either way the videostore loves. See you soon! Cheers!

A New Batch Of Titles Crash Into The Shop…

Last week of the month and the shop is doing it's best to make sure more fine cinema hits the shelves. Some...