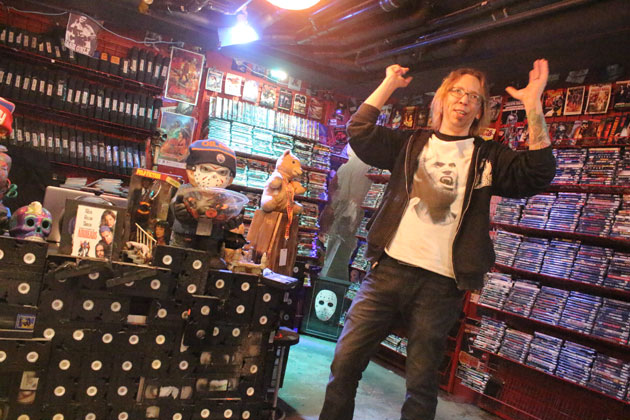 Known for being the last video store in Edmonton, The Lobby was born from owner/operator Kevin Martin’s love for movies—that started with his father taking him to see The Wrath of Khan—and a loan from Dadeo.

“No bank was going to give me a loan,” Martin says. “Luckily, I’d been a part of the Whyte Avenue community long enough while working at bars. And so my number one eating spot was Dadeo, at least once, maybe twice a day I would eat there.”

After telling Dadeo’s owners his position and him giving them a figure, they told him to come back the next day.

“They gave it to me in cash,” says Martin. “After that, all I wanted to do was stay open long enough to pay them back. It took me two years and I paid them back every penny. I didn’t think I’d stay open for another nine.”

As for Wrath of Khan, it was the first movie that he remembers seeing in the theatre. His father took him to see it at the Paramount when he was a wee lad. And it blew his mind. “That movie changed my life forever,” he says.

Thus began his love affair with all things film. Not only did he open The Lobby in 2005, but he and a group of friends also started the Dedfest International Genre Film Festival. His investment in film and the film industry runs deep.

Now, with close to 6,000 films covering the walls, Martin has access to all the films he wants to watch. And he has very specific tastes.

“I made a promise to focus on the cult, out there, outrageous, art house and horror movie cinema,” Martin says. “I find the fans of those movies are rabid collectors. You can download anything you want, but these people want a physical copy. They need to hold it in their hands.”

When he first opened the doors, Martin guesses there were maybe 30 to 40 video stores still operating in Edmonton. But over the next few years, he noticed that things started to change. First, a lot of the locally owned stores closed. Then Blockbuster left. Then, most recently, The Movie Studio closed up shop.

“People say that I must feel cool being the last video store,” says Martin. “When Blockbuster closed down I was like, yeah, fuck those guys. They were the corporations that destroyed the mom and pop shops that I grew up with as a kid. I had no sympathy for them. But with the other stores closing down since then, the best analogy I can come up with, is being in a trench in the front lines of the First World War.”

Martin then envisions a scenario where he is the last man standing. All around him are the bodies of his friends. In his gun are only a few bullets.

“You look out of the trench and it’s not the Germans coming, but a bionic, robotic army called Netflix,” he says.

He is disheartened a bit, but he loves his store. It is a hangout, a place to come and chat. A place where he can suggest films and talk about them. On his list of all time favourites are Taxi Driver, Return of the Living Dead, the original Martyrs, but no prequels. Martin doesn’t like prequels.

As for his station in the world, and his store being the final video rental post in Edmonton proper, does he still see his store as being relevant?

“Until Netflix has Cannibal Holocaust on it, I feel like I still have a purpose,” he says.