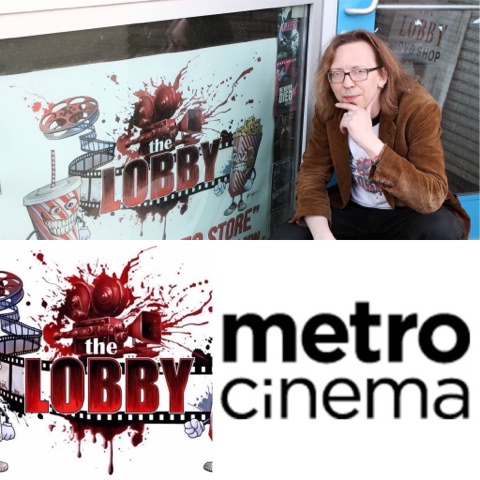 Well kids, after many years of working on DEDFEST and with the METRO CINEMA I figured given the chance I would like to create a series of film screenings personal to my heart that have been the inspiration for having and battling to keep the LAST VIDEO STORE in our city going. Honestly I was trying to come up with many clever and cool sounding titles for this series that did not involve the name of the actual shop but after thinking about it repeatly it just kept coming back to “THE LOBBY” presents. But there is a strong reason for that and the idea of this series which I will try to explain.

As a kid in the 80s the videostore boom opened a whole new world for us young ones. The fact that if you were lucky enough to have a parent sacrifice a huge paycheck to buy a VCR back then was a blessing. Yes, they were that expensive in the day. Seriously, the cost of a BETA or VHS player in the early 80s was a new car. Another great thing was having a local videostore in your neighbour that you could walk up to as a wee one and not have the staff ask if you were old enough to watch a certain. Ahh…god bless the local MOM and POP shops!

Yes, while many younger people look at us slightly older folks and think we miss BLOCKBUSTER VIDEO they are sadly mistaken. You see, it was the local shops called “MCVIDEO” or “BOB’S VIDEOSTORE” that opened our minds and obsession to the amazing titles that turned us into genre fans back in the mid to late 80s. Once the corporate BLOCKBUSTER VIDEO showed up in Canada they tried to steal that by not letting underagers like myself rent the sweetness that was horror, exploitation, or hard edged sci-fi films by determining that we were not mature enough for such material. Well they were wrong because those films were made for us and turned us into the fans of cinema that we would become. So thank you BOB and your non-caring attitude of letting 10 year old Kevin walk out with Dawn Of The Dead and Texas Chainsaw Massacre to watch at home. I salute you!

So thanks to the VCR becoming our babysitter for lots of us and because our parents worked hard to keep us fed and cared not about us staying up way too late on school nights a magical thing was created. That thing born in the 80s was the “Late night movie marathon of what the fuck?!”. A thing that would mold the young minds of childhood infront of the old tube TV. From sex comedies to balls out action flicks it was a free for all on our senses. But it always came back to the horror genre for me. From big budget studio to small independent Direct to VHS flicks it was a passion that has created the videostore I now have lived in for the last 15 years.

So when thinking about putting together this list of screenings to represent that era I knew it was going to be sweet retro goodness. Movies that impacted me when I was growing up all “Stranger Things” in the 80s. But now I wanna share this love to maybe the younger generation that visit my shop or with my fellow 30 and 40 year olds that can relate. Or maybe someone in their 50s or 60s that used to pick these very movies out for kids like me back then. I wanna gather us all at once every second month at the METRO CINEMA, crack a beer, eat some popcorn, and relive this by gone era with fellow fans! So what to choose to start it off?

This was always a no brainer for me. RETURN OF THE LIVING DEAD made me. I have previously written an article on the film on this site in past so I’m not gonna go into great detail here but let’s just say it opened my movie going world in more than one way. If you wanna read that here is the link… http://www.thelobbymovies.com/you-think-this-is-a-costume-its-a-way-of-life .

With the perfect blend of hunour, horror, and amazing soundtrack, and one screen stealing punk rock lady 10 year old me was hooked not just to this film but every genre film that would come next.

So thanks to the amazing folks at the METRO CINEMA they are allowing me to take you down a road of what makes a nerdy kid like me back in 1985 still decide to make no money in 2020 to keep a basement videostore alive. I hope you can join me on this first of many big screen experiences that shaped horror movie nerds for generations just by visting your local videostore!

Hope to see you all down there on what should be a great film experience to share with friends and beer. And if all goes well I know exactly what the next THE LOBBY DVD SHOP and METRO CINEMA screening will be in MAY to keep the journey going because some legends never die…Cheers!

This Week A Runaway Train Explodes Onto Blu Ray….

Last shipment of Febuary hits this Thursday (hopefully) and the movie that grabs the videostore's attention is the first BLU RAY release...

Well hey kids! Happy Halloween Week indeed. It's that magical time of the year when old creepy Irishmen want to sacrifice the...

Well, it was a fine night of food, whiskey, couch, and watching a pair of flicks with my cats from the old...