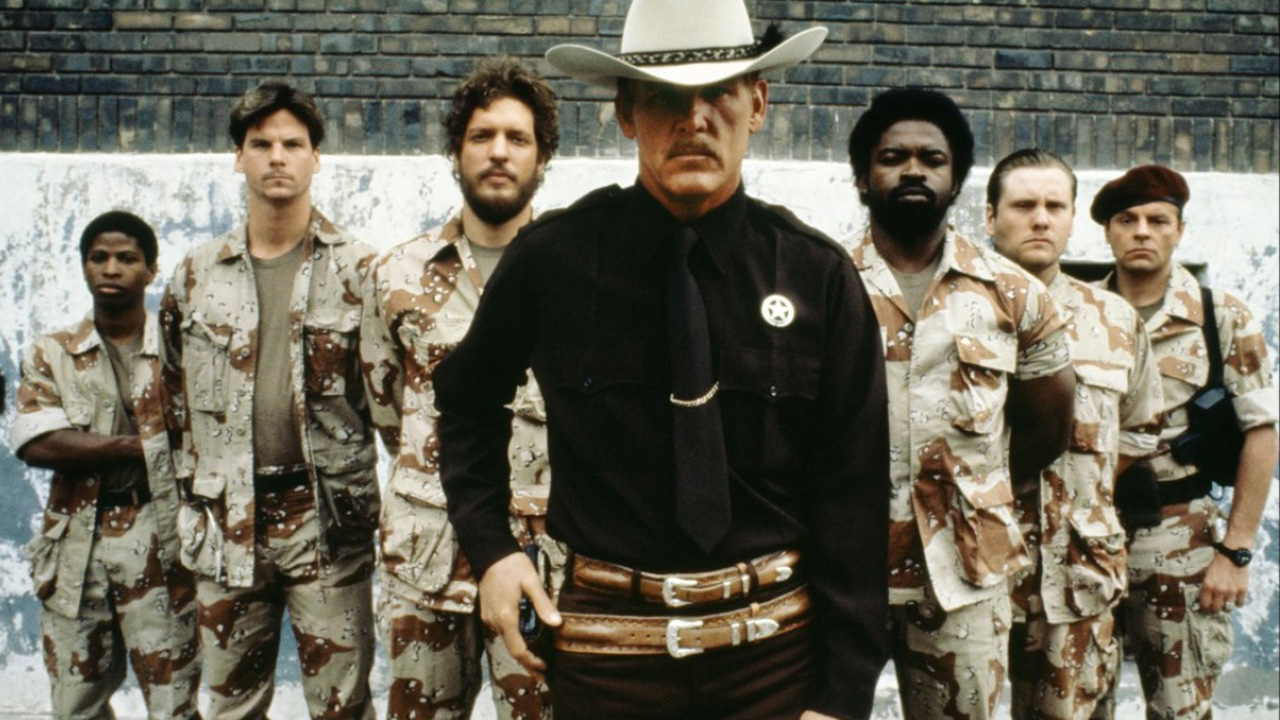 Another week of goodness comes crashing into the videostore. Some new stuff, some classics, and some random stuff. Basically a lot of stuff. So let’s take a look at some of these titles about to hit the shelves of the old videostore.

Solid 8 film set from the third year of the AFTERDARK horrorfilm fest.

The president of Earth sends space adventurer Barbarella on a mission to retrieve a scientist. She crash lands on a planet and explores its strange customs after a man rescues her from captivity.

In pre-Civil War Texas, naïve Karl Westover (Gary Busey) accidentally kills his brother-in-law, and heads to Mexico to escape the consequences. Along the way, he encounters Barbarosa (Willie Nelson), who is also on the run. Barbarosa teaches Karl survival skills for the desert — and how to rob. In their journey from Texas to Mexico and back again, the two men are captured by outlaw Angel Morales, and pursued by Don Braulito (Gilbert Roland), who wants Barbarosa dead.

Starring Richard Pryor, Harvey Keitel, Yaphet Kotto. When three workers try to steal from the local union, they discover the corruption of the union instead and decide to blackmail them. Paul Schrader (1978)

Low-level bureaucrat Sam Lowry (Jonathan Pryce) escapes the monotony of his day-to-day life through a recurring daydream of himself as a virtuous hero saving a beautiful damsel. Investigating a case that led to the wrongful arrest and eventual death of an innocent man instead of wanted terrorist Harry Tuttle (Robert De Niro), he meets the woman from his daydream (Kim Greist), and in trying to help her gets caught in a web of mistaken identities, mindless bureaucracy and lies.

A guy’s regrets over moving in with his girlfriend are compounded when she dies and comes back as a zombie. Anton Yelchin, Ashley Greene, Alexandra Daddario, Joe Dante, 2014.

A dramatization of the ascent to Caesar and subsequent reign of Caligula, one of the most notorious leaders of ancient Rome. We see his ambition, his scheming, his perversion and decadence, his brutality and his lunacy and how this impacts the people around him and the empire he leads.

A young woman who works in a beauty salon discovers that her private parts can talk, which causes her no end of personal trouble despite making her rich.

The illegal trade of human organs brings a martial-arts crusader face to face with his evil counterpart.

At the height of the Sword & Sorcery craze, Maestro Of Gore Lucio Fulci (ZOMBIE) attacked the genre like no filmmaker had ever done before. Jorge Rivero (RIO LOBO), Andrea Occhipinti (NEW YORK RIPPER) and the luscious Sabrina Sellers (WHITE CANNIBAL QUEEN

A troubled method actor gets carried away with his work on a role, playing a butcher. Drew Hale, 2020.

BACK IN STOCK! The double feature of Don’t Breath and it’s sequel.

James Bryan’s cult classic about a group of obnoxious campers who venture into the wilderness for what they assume will be a fun filled weekend. Unknown to them, a bloodthirsty maniac is hiding in the woods…

The Bob Hope of bosomy camp horror comedy! Set in Victorian times, Elvira & her maid end-up spending the night at an old creepy castle when they hitch a ride with a local. Written by John Paragon. Richard O’Brien, Mary Scheer, 2001.

In a world ravaged by crime, the island of Manhattan has been converted into a prison which houses the world’s most brutal inmates. And when the President of the United States crash lands inside, only one man can bring him back: Snake Plissken! In 4K!

Ridiculous but stylish 80s ultra-violent action film about a Texas ranger who must take on a childhood friend who is now a drug kingpin. Nick Nolte, Powers Boothe, Michael Ironside, Walter Hill, 1987.

A documentary about the ill-fated pirate comedy production for Columbia Films (Ghost in the Noonday Sun) and the efforts of its star, Peter Sellers, to derail the production. Peter Medak, 2018.

GHOSTHOUSE: A teenager and her boyfriend learn that strange radio messages are screams from the future. WITCHERY:A photographer (David Hasselhoff) and others (Linda Blair, Catherine Hickland) are stranded at a Massachusetts island hotel haunted by a woman in black.

80s slasher about an axe-wielding presumed dead student returns to get revenge on his fellow students during a campus wide scavenger hunt. Hal Holbrook, Robert Deubel, 1982.

Residents of an island off the coast of Ireland learn that the only way to survive an invasion of blood-sucking aliens is to stay drunk.

Bull Meechum (Robert Duvall) is a great fighter pilot — so great that he dubs himself “The Great Santini.” While his take-no-prisoners attitude and willingness to fight has served him well in the military, he’s unable to turn it off at home. Eventually his competitive nature and abusive behavior take their toll on his relationships with his wife (Blythe Danner) and his rebellious 18-year-old son (Michael O’Keefe) after a friendly father-and-son basketball game turns ugly.

A pregnant tourist and a young mother fight for their lives when a hotel hallway is ravaged by a mysteries virus.

A sexy space vampire comes to earth and begins to transform the population of London into zombies. From director Tobe Hooper and writer Dan O’Bannon. Steve Railsback, Mathilda May, Peter Firth, 1985.

Starring Terence Stamp, Elisabeth Shue. A young zoology student is invited to assist an anthropologist with his experiments involving chimpanzees, mysterious events occur that all centre around the simian servant, Link. Richard Franklin (1986)

When a proud noble refuses to kiss the hand of the despotic King James in 1690, he is cruelly executed and his son surgically disfigured. Paul Leni (1928)

A young man hides from the police in a secret school for wayward girls which turns out to be a cover for radical militant lesbians. Bruce La Bruce (2017)

In 1981 New York, a fuel supplier (Oscar Isaac) tries to adhere to his own moral compass amid the rampant violence, corruption and decay that threaten his family and his business.

A decades-old folk tale surrounding a deranged murderer killing those who celebrate Valentine’s Day turns out to be true to legend when a group defies the killer’s order and people start turning up dead. George Mihalka (1981)

Kaneto Shindo’s chilling retelling of the nightmarish folktale of an impoverished older woman, her daughter-in-law and a bedraggled neighbour fresh from battle that they both desire. 1964.

Leyser’s film is an important document capturing the influence of queercore, an underground movement that enjoys life on the fringes, where identifying as an anti-establishment “arty weirdo” is just as important as sexuality. Yony Leyser (2017)

An officially “dead” cop is trained to become an extraordinary unique assassin in service of the US President. Fred Ward, Wilford Brimley, Kate Mulgrew, Guy Hamilton, 1985.

Meryl Streep and Kurt Russell star in this controversial true story of a worker at a nuclear plant purposefully contaminated, psychologically tortured and possibly murdered to prevent her from exposing violations at the plant. Mike Nichols (1983)

A young rap group is on the verge of signing its first record deal just as a giant, mutated snake threatens the city and the group’s dreams of commercial success.

A pierced and tattooed sadist, Captain Howdy (Dee Snider), trolls the Internet for naive teens, luring them to his home to torture and defile them. When Howdy kidnaps and tortures the daughter of police Detective Mike Gage (Kevin Gage), he is caught. Deemed insane, he is sent to an asylum but is released soon after, seemingly better. However, Gage knows it is only a matter of time before Howdy strikes again, and he’s ready to unleash his own form of retribution when the time comes.

Back In Stock! Steelcase edition.

Ecology students discover a prehistoric parasite that has been released from the melting polar ice cap threatens the safety of the world.

A group of young friends stranded at a secluded roadside museum are stalked by a masked assailant who uses his telekinetic powers to control the attraction’s mannequins. Score by Pino Donaggio. Chuck Connors, Tanya Roberts, Linnea Quigley, 1979.

In a zombie-infested Australian wasteland, a soldier has dedicated his life to tracking and capturing survivors for the Surgeon General in hopes of finding a cure. Kiah Roache-Turner, 2021.

And there we go guys. Some fun stuff coming in this week. Hope everyone is having a solid day and we’ll see ya soon enough. And remember…the videostore luvs ya! Cheers.

Hey guys, it's another glorious week at the videostore and sometimes the new stuff that comes in isn't really new but much...

Well guys, pretty exciting week of cinema coming to the shop this week. It is a big order covering ninjas, crazy Hong...

Well kids, it's time for your old pal the Videostore guy tell you a magical tale of the past. Accepting the fact...