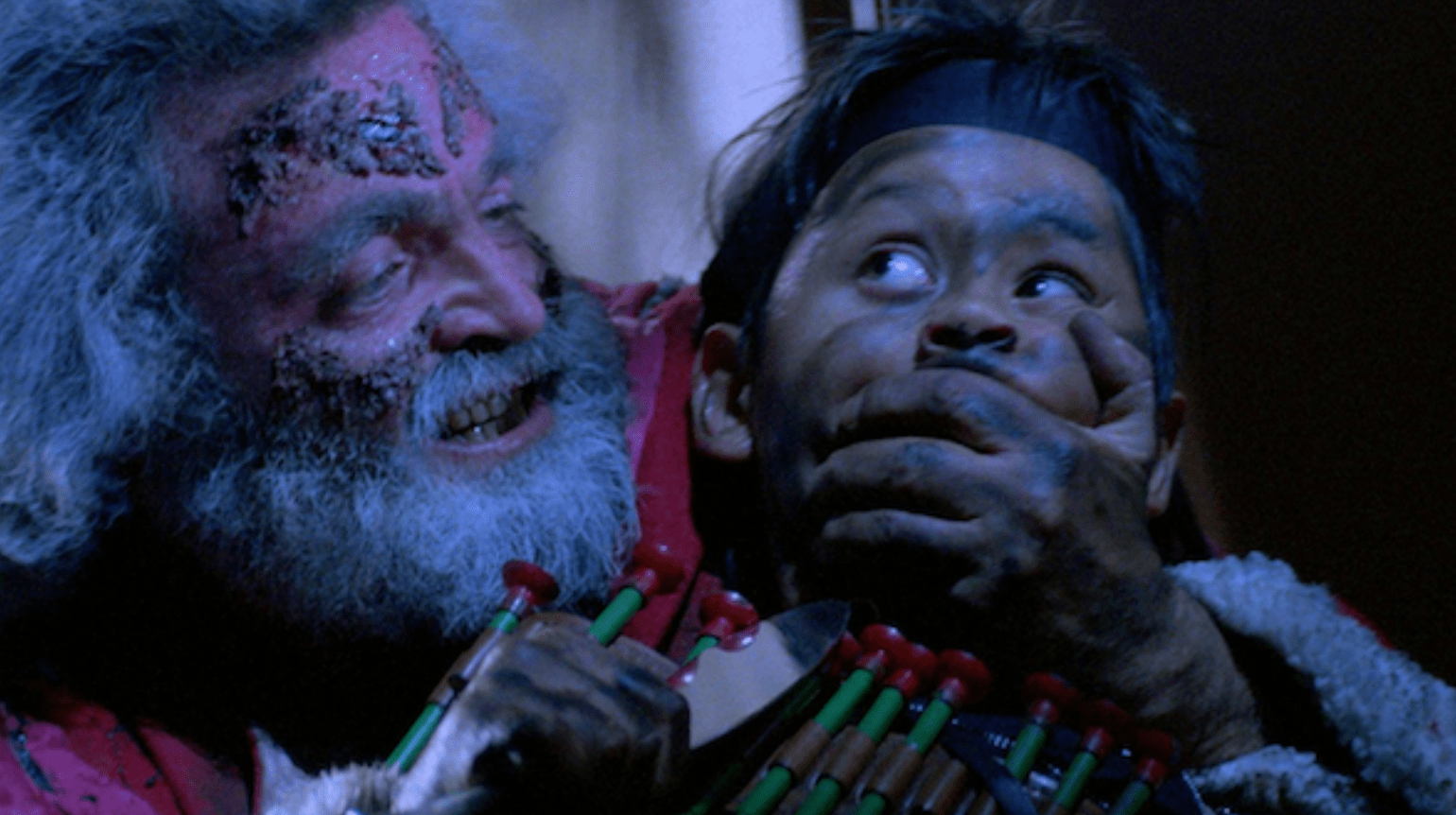 Oh hey kids…another week of goodness approaches the old videostore and is the white stuff covers the land it is a given that Santa will be covering the shelves of the shop. Ofcourse with this shop it is never gonna be the traditional Christmas affair in movies so let’s see what the Jolly Man has to deliver in these movies along with everything else coming…shall we?

A young man (Maurice Patton) embarks on a quest to shoot a documentary about his favorite martial-arts movie star (James Lew).

Back In Stock! Kubrick’s ground breaking classic along with the usually forgotten 1984 sequel.

Suffering and death await a group of party-goers at a water park in this horror comedy from Quebec. Renaud Gauthier, 2019.

Back In Stock! Trapped In Time. Surrounded By Evil. Low On Gas. Bruce Campbell, Sam Raimi, 1992

Two sisters who suffered abuse as children at the hands of their sadistic father decide, after his death, to use witchcraft to bring his spirit back to get revenge. James Cullen Bressack, 2019.

Back In Stock! A semi-fictional documentary which looks at the fictional final moments with the real denizens of a Las Vegas (actually in New Orleans) dive bar ‘The Roaring 20s’ (which is real place). Bill and Turner Ross, 2020.

The director of a foster home is forced to move her kids from Philadelphia to Seattle in a broken down bus – driven by a fast-talking parolee assigned to the task. Richard Pryor, Cicely Tyson, 1981.

Controversial Russian film in a style akin to the films of Gaspar Noe and Michael Haneke. Described as a “grim epitaph for the death of the former Soviet Union”. Alexey Balabanov, 2007.

Back In Stock. “The Cell” takes a shocking, riveting mind trip into the dark and dangerous corridors of a serial killer’s psyche — a psyche that holds the key to saving the killer’s final, trapped victim who remains alive. Making this journey into the recesses of a killer’s nightmarish fantasy world is Catherine Deane, a psychologist who has been experimenting with a radical new therapy. Through a new transcendental science, Catherine can experience what is happening in another person’s unconscious mind.

A horror anthology, shot on video in 1987 [allegedly] and lost for 30 years. A video game geek watches TV and only gets reception on channel 13, where a hooded monk shows tales of killer scarecrows, monster birds, and cannibal spaghetti farm owners. 2015

Not even Santa Claus is safe from the evil that descends on Bailey Downs, a small town that is suddenly plagued with malevolent spirits, zombie elves and Krampus — the anti-Santa Claus.

Back In Stock! The most comprehensive documentary on the 1984 Ghostbusters.

Oddball French action-horror about a action movie enthusiast young boy who must defend himself and his grandfather from a killer dressed as Santa Claus. Brigitte Fossey, René Manzor, 1989.

At some time in the near future, a farmer (Clint Walker) fights urban raiders for killing his family.

Beloved trash master John Waters directs this tale of a neurotic society woman who murders her husband with the help of her maid and, on the lam, escapes to Mortville, a misfit community ruled over by a fascist queen. John Waters (1977)

Back In Stock! A struggling painter is possessed by satanic forces after he and his young family move into their dream home in rural Texas, in this creepy haunted-house tale. Sean Byrne (2015)

The dastardly Dr. Goldfoot (Vincent Price) and his sidekick, Igor (Jack Mullaney), build a race of bikini-wearing beauties who are designed to win the hearts and fortunes of the most influential men of the world. Before long, the manufactured women begin to succeed, and Robot 11 (Susan Hart) is sent to coax multimillionaire Todd Armstrong (Dwayne Hickman) into handing over his wealth. Government spy Craig Gamble (Frankie Avalon) tracks down Robot 11, but even he isn’t immune to her charms.

Dapper Count Dracula (Leslie Nielsen) relocates from his Transylvanian castle to Victorian London with his slavish assistant, Renfield (Peter MacNicol), in search of new blood. He finds it in a pair of beautiful young women, Mina (Amy Yasbeck) and her best friend, Lucy (Lysette Anthony). When Mina’s straitlaced fiancé, Jonathan (Steven Weber), notices his future bride’s odd behavior, he calls in his mentor, vampire hunter Van Helsing (Mel Brooks), to save the day.

R rated film about Santa who partners with the military in order to keep his gift-giving business afloat complicating matters is a young boy who employs the services of a hitman to take down Father Christmas. Mel Gibson, Walton Goggins, 2020.

A group of forest rangers go camping in the woods, and trespass into an area where a backwoods mama likes to kill people who come onto her turf. John Friedrich, Adrian Zmed, Ernest Harden Jr., Andrew Davis, 1983.

A teenager discovers that the newcomer in his neighborhood is a vampire, so he turns to an actor in a television horror show for help dealing with the undead. Tom Holland (1985)

The first ever collection of works by William “Wild Bill” Grefé, the maverick filmmaker who braved the deep, dark depths of the Florida everglades to deliver some of the most outrageous exploitation fare ever to go-go dance its way across drive-in screens

Kirsty is brought to an institution after the death of her family, where the occult-obsessive head resurrects Julia and unleashes the Cenobites once again. Tony Randel (1988)

In 1989, Jackie goes to a movie on Halloween, and a stranger starts killing off everyone around her.

A prehistoric Neanderthal man found frozen in ice is revived by an Arctic exploration team, who then attempt to use him for their own scientific means. Fred Schepisi (1984)

Stomach-churning hunt-and-kill cult horror about a slasher on the loose in a supermarket. Bruce Campbell, Sam Raimi, Scott Spiegel, 1989.

A chilling portrayal of the Italian fascist leader’s unquenchable thirst for power and glory featuring a mesmerizing performance by George C. Scott. 1985.

A high school student stumbles upon a time-warp machine that unleashes forms from the past and future upon his local high school. John Stockwell, Dennis Hopper, 1985.

Fun cult film about a pair of Valley Girls who survive the apocalypse and must defend themselves against zombies while they go shopping. Mary Woronov, Catherine Mary Stewart, Robert Beltran, Kelli Maroney, 1984.

An unemployed Maori living in the Auckland slums, Jake Heke (Temuera Morrison) has a terrible temper that he takes out on family and strangers alike. His wife, Beth (Rena Owen), takes regular beatings after he’s been at the pub, and his kids do what they can to sidestep trouble. Nig (Julian Arahanga), the eldest, is joining a street gang; Boogie (Taungaroa Emile) has been placed in a foster home; and Grace increasingly retreats to the pages of her journal.

A timeless tale of vengeance told through the medium of a bloated Jaws rip off! Richard Harris, Charlotte Rampling, Michael Anderson, 1977.

Exploitation film which is an odd mixture of documentary footage and re-enactments by non-actors, many filmed on the actual locations, of the infamous Tate-LaBianca murders committed by the Manson Family. Brian Klinknett, Frank Howard, 1971.

Soon after getting a new phone, a woman notices strange things starting to happen. When she investigates, she discovers that everyone who has had her phone number before her has died suddenly and mysteriously.

Beloved cult horror about a group of teens who inadvertently kill the child of a backwoods witch who unleashes a monstrous demon called Pumpkinhead to exact her revenge. Lance Henriksen, Jeff East, Stan Winston, 1988

Emmy winning series where scientist Sam Beckett finds himself trapped in time–“leaping” into the body of a different person in a different time, but only by resolving the problems of each life can he make the next leap towards home. TV Series (1989-1993)

Back in Stock! The two of the best mordern action flicks return to the shop!

Uwe Boll’s story of An ordinary young man in a small town suddenly snaps, arming himself with machine guns and going on a relentless killing spree. Also the two follow up sequels included.

A group of rock-music-loving students, with the help of the Ramones, take over their school to combat its newly installed oppressive administration. Allan Arkush (1979)

A woman (Caroline Ducey) has several affairs, trying to spark the interest of her lover (Sagamore Stévenin), a self-absorbed, male model.

In the small South American town of Porvenir, four men on the run from the law are offered $10,000 and legal citizenship if they will transport a shipment of dangerously unstable nitroglycerin to an oil well 200 miles away. Led by Jackie Scanlon (Roy Scheider), the men set off on a hazardous journey, during which they must contend with dangerously rocky roads, unstable bridges, and attacks from local guerillas. The four fight for their lives as they struggle to complete their dangerous quest.

Sequel to the cult Korean zombie film Train to Busan, dispenses with the character driven narrative of the first film and provides the viewer with a ridiculously cartoonish zombie holocaust. Sang-ho Yeon, 2020.

Twenty-five years after members of a religious cult committed mass suicide, the lone survivor returns to the scene of the tragedy with a documentary crew in tow. Jessica Alba, Thomas Jane, Phil Joanou, 2016

After the death of his mother, the evil mutant wizard Blackwolf (Steve Gravers) discovers some long-lost military technologies. Full of ego and ambition, Blackwolf claims his mother’s throne, assembles an army and sets out to brainwash and conquer Earth. Meanwhile, Blackwolf’s gentle twin brother, the bearded and sage Avatar (Bob Holt), calls upon his own magical abilities to foil Blackwolf’s plans for world domination — even if it means destroying his own flesh and blood.

And there we go. Another week of cinema coming to entertain us in these dark days and personally the idea of Mel Gibson playing a Rated R action Santa Claus makes me smile. Either way always remember the videostore loves you. Cheers!

A Sadness Is Coming To The Shop This Week…

Hey Gang! Back it with new flicks hitting the shop. This week is a mix of old and new with the big...

A Few New Items Arrive At The Shop This Week….

A new month dawns and even though I myself will be gone most of it living in a fake videostore the real...