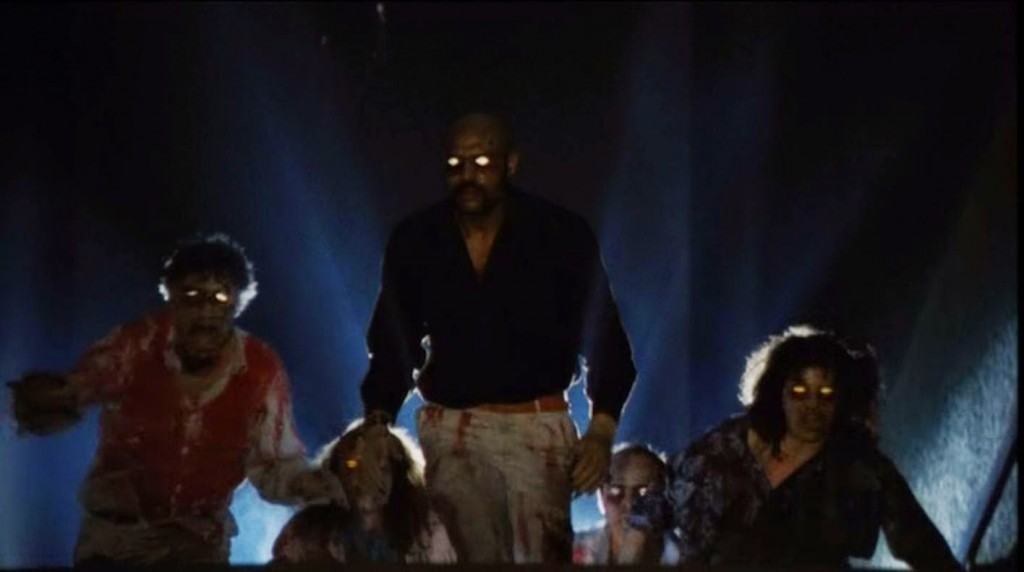 Through the bowels of 1980s cult cinema and discovering the sweet gems in life at the local videostore not many hit a nerve with 10 year old me more than 1985’s DEMONS. What can be said about this insane movie that has not been mentioned in the past?

Directed by Lamberto Bava (Son of Mario) and written by the great Dario Argento this movie introduced my young eyes to a different kind of splatter gore. A different kind of zombie style movie. They were Demons! Servants of evil! And man they sure used a lot of nasty violence blended with creative practical FX to get that point across.

Taking the simply idea of a group of movie goers who have picked to get a sneak peak of a brand new horror film in the legendary Metropol Cinema only to have the events of the film play out in real life causing an apocalyptic outbreak of epic proportions was one hell of movie ride.

This was my first exposure to the Italian style of horror. Outrageous gore, crazing dubbed dialogue, a soundtrack of Motley Crue and Billy Idol screaming out during the chaos, and an ending that told us the world is fucked because of these damn DEMONS!

And all started how? Because one single person could not resist but touch something that did not belong to them. It all comes down to trying on that damn mask which gives your face a slight cut but soon enough forms ino something far more devasting as the wound begins to throb and pulse away until your teeth and nails come sliding off your body to reveal your new look…DEMON.

So to celebrate the 35th anniversary and remind the movie nerds of the evil of that mask the boys at NERD SHIRTS have created this double sided shirt which hits the shop this weekend. The front ofcourse being the mask in focus looking as menacing as ever and the orignal Italian title “DEMONI” above it. Beautiful.

And one the back of the shirt…the overall reality of the evil that was let loose and the ultimate goal of these nasty creatures to our world. Indeed a line and prophecy mentioned in the movie itself and making it’s way as the tagline to the film … “THEY WILL MAKE CEMETERIES THEIR CATHEDRALS AND THE CITES WILL BE YOUR TOMBS”. Perfect and damning all at once. So as always it will be a LIMITED EDITION run. First come first serve. Only available at THE LOBBY DVD SHOP. Cheers!

Hey guys, well here it is. Basically every movie in the shop broken up rack by rack. So basically when you see...

The Month Of October Keeps Rolling With Cinema…

The weather keeps dropping, the leaves keep falling, and the back streets of the city are looking like Haddenfield which can only...