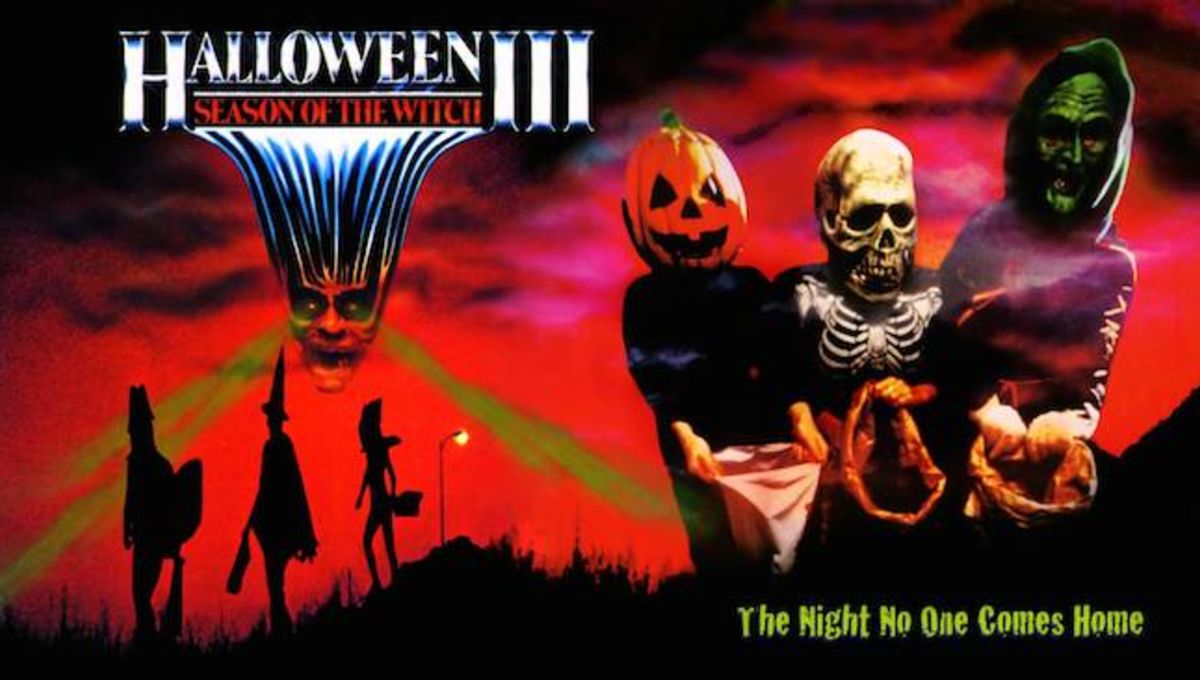 Evil toymakers. Androids. Bugs. Stonehenge Cult. The Killing of America’s children with creepy masks. Tom freaking Atkins! How could a movie like this fail? Well, in 1982 it did and audiences were having none of it. Quite simply they felt betrayed leaving that theater. Only one question was asked by every paying customer that left the cinema back then…”Where the hell was Michael Myers?!?!”

Almost 40 years later many of us, not all, but many of us look back at Halloween III and now have a soft spot in our movie nerd hearts for it. The way I see it on it’s own as a film it was a good, trashy Halloween tale to be told. The idea of demented Irish toy maker wanted to wipe out most of the country’s children by use of these masks and a TV give away on Halloween night was damn dark. The lead of Daniel Challis, an investigating drunken doctor and terrible estranged husband to his own family being played be iconic genre legend Tom Atkins was perfect. So what went wrong? Honestly to me it was simply the title.

Understand back when this movie was being made the idea of continually bringing back an unstoppable killer for movie after movie was basically unheard of. In 1982 Jason had only hit the screen twice as a killer (Part 1 does not count obviously) and Michael Myers’ story was done with Halloween 1 and 2 basically playing out like a 3 hour film since it takes place all in one day. Aside from that multiple sequels with the same killer doing the same thing movie after movie was unheard of. Hard to believe in 2019. But there lies the problem with this movie. The fact that they HAD made two movies with Myers the set up for disappointment by the general audience was already waiting to happen.

After completing the Michael Myers saga in the first 2 films Carpenter and Tommy Lee Wallace figured make more Halloween flicks but with different original ideas simply using the magical time of the year as the back drop. And honestly it’s not a bad idea and I think it would have worked if this film would have hit after the original Halloween being the second installment in the franchise. But having made two “Michael” films already they were doomed.

So is Halloween III a great film with a bad name? Well no, it’s a mess of movie BUT it’s a damn fun mess. Tom Atkins is great in anything and this was no exception. Dan (Robocop) O’Herlihy looked like he was having a blast playing the over the top evil toy maker Cochran. And killing kids by having their heads eaten away with bugs and reptiles under those SILVER SHAMROCK masks?! WTF! And let’s not forget that god damn music. The Silver Shamrock theme, once entered in your head would never leave. EVER!

I would also like to point out that between this film and Carpenter’s THE FOG Tom Atkins hooks up with women 24 and 23 years younger than him respectively. Both within 20 minutes of the movie. The man was and still is a legend. And you can never fault a horror film that gives you a ballsy non-happy ending. After escaping the crazed robots and disposing of the main baddie surely good old Tom would save the children? Short answer. NOPE.

So all these years later I simply wanna say. Halloween III is not as bad as you remember. Halloween III would have done better if simply called SEASON OF THE WITCH. And MOST IMPORTANTLY help show some love for this underrated gem by grabbing the latest nerd shirt in tribute to the 1982 flick. Shirts will hit the shop this weekend! Thanks for reading!

Another Week Of More Excellent Cinema Crashing Into The Shop…

Oh Mother Nature…you evil unrelenting thing you. You just had to dump down on us over the weekend. Oh well, here we...

Another Glorious Week Of Cinema Comes Crashing Into The Shop…

Well the month of June keeps on trucking at the shop and titles I troed to get in during the last couple...