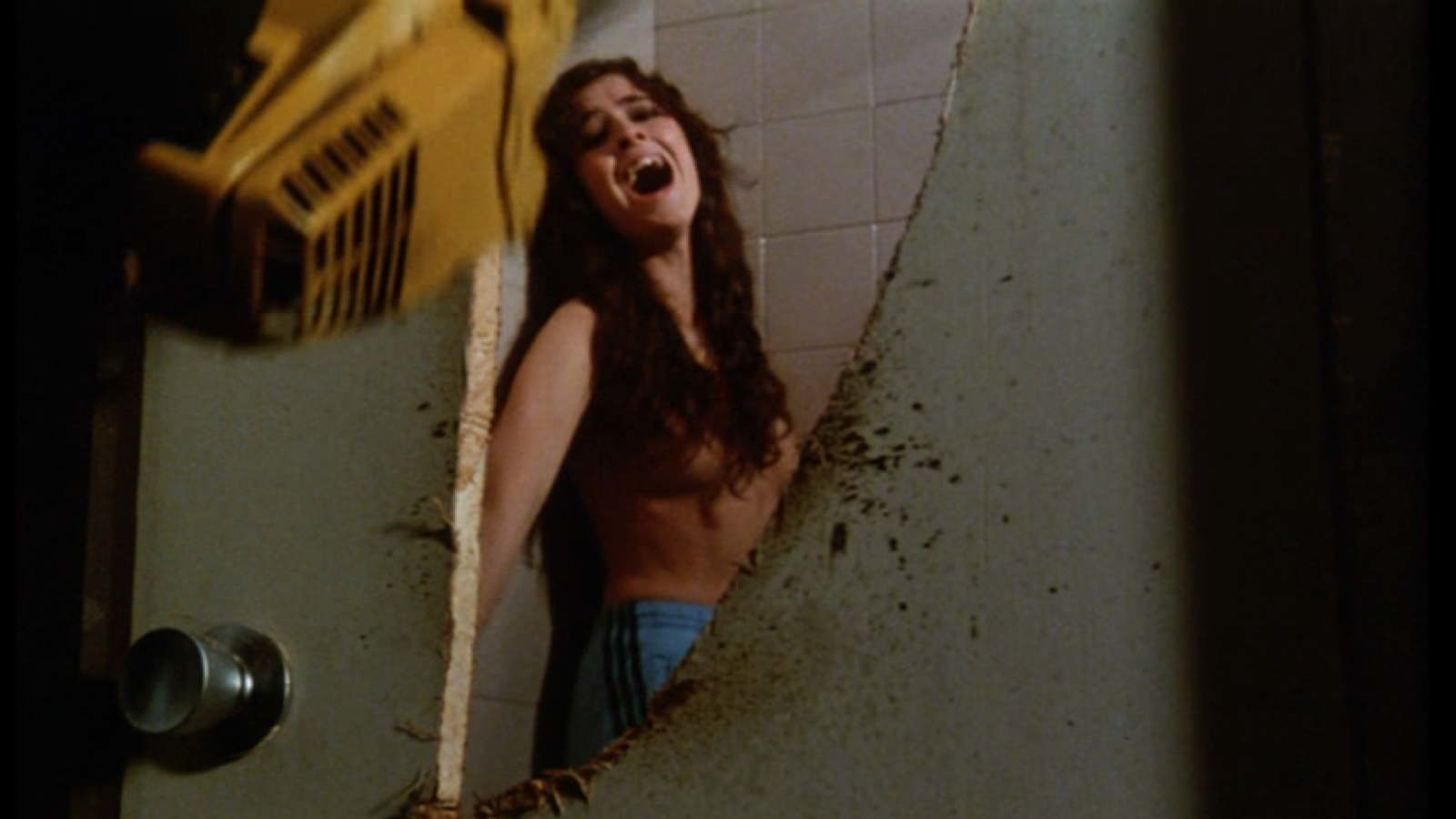 Based on the film, this tv series follows a man from the post-apocalyptic future using an untested method of time travel to get from 2043 to the present day on a mission to locate & rid the world of the source of the plague.

A rich widow (Lynn Bari) pays a fake medium (Turhan Bey) to contact her late husband, who, it turns out, is still alive.

Joel and Ethan Coen began their long career with this razor-sharp, hard-boiled noir set somewhere in Texas, where a sleazy bar owner sets off a torrent of violence with one murderous thought. M. Emmet Walsh, Frances McDormand.

A young actor’s obsession with spying on a beautiful woman neighbour leads him into a tangle of murder where he must prove his own innocence while battling crippling claustrophobia. Brian De Palma (1984)

A boy communicates telepathically with his dog as they scavenge for food and sex, and they stumble into an underground society of cannibals. Don Johnson, Jason Robards, L.Q. Jones, Written by Harlan Ellison, 1975.

Banned in 31 countries – the original uncensored, unrated director’s cut of one of the most notorious and violent films of all time. Umberto Lenzi.

French horror. Dancers gather in a remote, empty school building to rehearse on a wintry night. The all-night celebration morphs into a hallucinatory nightmare when they learn their sangria is laced with LSD. Gaspar Noé (2018)

Vietnam vet finding his life is a festering sewer of poverty, hopelessness and violence decides to get revenge! Troma-style! Commentary with German filmmaker Jorg Buttgereit.

Sadistic convicts run rampantly after an ambush sets them free.

A divorced mother, her young son and her new boyfriend set out on a road trip through Death Valley and run afoul of a local serial killer. Peter Billingsley, 1982.

Sylvia Stickles (Tracey Ullman) runs a convenience store with her husband (Chris Isaak) and mother-in-law (Suzanne Shepherd). One day, Sylvia is hit on the head and transforms from an uptight prude to a sex-crazed lunatic. As she goes on a rampage through town, Sylvia attracts the attention of Ray Ray (Johnny Knoxville), a sexual healer and tow truck driver in search of the world’s greatest orgasm. Their sexual revolution, however, causes a class war in their tiny Baltimore community.

A woman is placed in serious jeopardy after her husband mysteriously disappears from the washroom of a run-down diner.

In this British black comedy, a posh London restaurant is taken over by revolutionaries where the restaurant’s former patrons are the main course. Al Pillay, Dave Beard, Lemmy, Peter Richardson, 1987.

Laura Gemser returns as the infamous journalist who in this one goes undercover to discover the secret life of the sex workers and the white slave trade. Joe D’Amato, 1978.

Globe-trotting model/reporter Emanuelle travels to the sweltering deserts of Egypt and finds herself falling into a series of sensual encounters. Brunello Rondi, 1976.

Horror spoof about a bong possessed by evil spirits that begins to terrorize some good-natured potheads. Tommy Chong, Charles Band, 2006.

A Northern California fishing community, built over an old leper colony, is the target of revenge by a killer fog containing zombies rising from the sea to take revenge for their deaths. Adrienne Barbeau, Jamie Lee Curtis, Janet Leigh, John Carpenter.

In post-war Tokyo, the solidarity of a group of prostitutes, who use a deserted building to ply their trade, is threatened when an ex-soldier hides out with them after attacking an American soldier.

Jim Jarmusch combined his love for the ice-cool crime dramas of Jean-Pierre Melville and Seijun Suzuki with the philosophical dimensions of samurai mythology for an eccentrically postmodern take on the hit-man thriller. Forest Whitaker, Henry Silva, 1999.

In the second live-action Muppets film, intrepid journalists Kermit, Fozzie and Gonzo snag an assignment reporting on a British jewel heist. Arriving in England, the trio settles in at the raucous Happiness Hotel and seeks out socialite Lady Holiday, the victim of the theft. Soon Miss Piggy appears, intending to work for Lady Holiday, but she ends up being framed by the aristocrat’s scheming brother, Nicky. Kermit and company work to clear Piggy’s name.

A gang of Irish teen drop outs drop pills and go raving to the sounds of Joy Division, Primal Scream and The Chemical Brothers in the summer of 2003 in Dublin. Dean-Charles Chapman, Finn Cole, Anya Taylor-Joy, Eoin Macken, 2020.

What would happen if Canadian proto slasher Black Christmas was made in 1983 instead of 1974? This movie! A rare 80s slasher with a female focus from Brian DePalma protegé Mark Rosman.

Canadian made thriller about a family of fur hunters who run into trouble in the wilderness when they are stalked by a rogue wolf. Camille Sullivan, Summer H. Howell, Devon Sawa, Shawn Linden, 2020.

While on a boating trip, Scott Carey (Grant Williams) is exposed to a radioactive cloud. Nothing seems amiss at first, but several months later Scott realizes that he’s shrunk in height by several inches. He sees a doctor, who admits that he’s baffled. As Scott continues to shrink, decreasing to three feet tall, he becomes bitter, and lashes out at his wife, Louise (Randy Stuart). He begins to fear a cure will never be found — since even as he becomes a national sensation, he’s still shrinking.

From cult director Nico Mastorakis, a travelogue of atrocities with scenes so strong that the British Government was once compelled to ban it as a “video nasty”. Fully uncut and newly-restored from the original negative!

One of the better of the Italian cannibal films raises the bar in terms of extreme gore & nastiness, instead of just wallowing in exploitation! A civilized man must survive the jungle his encounter with the primitive. Ruggero Deodato, 1977.

KARATE ROCK: Italian B-movie filmmaker Fabrizio de Angelis attempts to capitalize on his “karate” films with the debut of current Hollywood star Antonio Sabato Jr. After causing too much trouble in Oakland, Kevin Foster is forced to move to a new town to start over. LADY BATTLE COP: After a terrorist attack, a tennis player is transformed into a deadly cyborg police officer.

A once-celebrated kid detective, now 31, continues to solve the same trivial mysteries between hangovers and bouts of self-pity. Until a naive client brings him his first `adult’ case, to find out who brutally murdered her boyfriend.

A vainglorious Union Cavalry officer, who mounts an expedition to hunt down an Apache war chief with an army of misfits and an his eye fixed firmly on a last shot at greatness. Charlton Heston, Richard Harris, Sam Peckinpah, 1965.

Nightmares & Dreamscapes: From the Stories of Stephen King is an eight-​episode anthology series on TNT based on short stories written by Stephen King.

The Living Dead are a delinquent biker gang, fond of causing havoc on British roadways and making out in graveyards. The leader Satanist mother unleashes the secret of immortality, and this motley crew takes on a more literal meaning. Don Sharp (1973)

All 8 SAW movies in one set.

Oliver Stone’s nuts cult debut film about a struggling writer tormented by the same weird dream in which a dwarf, a big mute executioner and a Vampira/Elvira clone kill his family and house guests. Jonathan Frid, Mary Woronov, Herve Villechaize, 1974.

Definitive horror starring Jodie Foster and Anthony Hopkins, a young F.B.I. cadet must receive the help of an incarcerated and manipulative cannibal killer to help catch another serial killer, a madman who skins his victims. Jonathan Demme (1991)

Biopic that chronicles David Bowie’s first visit to the US in 1971 which inspired the invention of his iconic alter ego Ziggy Stardust. Johnny Flynn, Marc Maron, Jena Malone, 2020.

A homicidal maniac is on the loose in the city and the low-budget film crew of a Troma movie has the power to stop them. Lloyd Kaufman (1999)

Starring Clint Eastwood, Jeff Bridges. With the help of an irreverent young sidekick, a bank robber gets his old gang back together to organize a daring new heist. Michael Cimino (1974)

Disaster strikes more than six miles below the ocean surface when water crashes through the walls of a drilling station. Led by their captain, the survivors realize that their only hope is to walk across the sea floor to reach the main part of the facility. But they soon find themselves in a fight for their lives when they come under attack from mysterious and deadly creatures that no one has ever seen.

The mythic cult film from Ryûhei Kitamura in both its original 2000 and expanded 2004 Ultimate Versus iterations, in a brand new, director-approved restoration.

Starring Rutger Hauer. The bounty hunter Nick is offered $250,000 by CIA to get the terrorist behind the bombing of an LA movie theater. Nick quit CIA – he couldn’t trust them. Can they be trusted now? Gary Sherman (1986)

Shire is the subject of a perverse obsession by a Lesbian neighbour who not only lusts for her, plays strange games to set her up, then turns peeping tom. Gordon Willis (1980)

Megumi and several of her friends go on a trip to the woods and they are attacked by a crowd undead covered in sewage. They seek refuge in Dr. Tanaka’s home and he tries to do experiments on them.

And there we go guys…a few new flicks to hit the shop just before the holidays. See ya later in the week. Cheers!

Well kids, it's time for your old pal the Videostore guy tell you a magical tale of the past. Accepting the fact...

AN ODE TO CHEERLEADER CAMP AKA BLOODY POM POMS..

I would like to start by saying I like bad cinema. I wanna double down and say I love slasher films. And...

The Month Ends With Color Out Of Space…

As Febuary winds down the movies coming to the videostore will do their best never to let you down so let our...