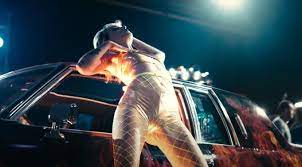 Well another week of cinema magic is upon us. The shop is very excited with a few of the movies coming in. From one of the years’s most creative and twisted films TITANE to the better late than never arrivial of the KRAMPUS: NAUGHTY CUT editions. If the shop is excited we hope you get excited as well once you look at the list of film so let’s get on with it shall we…

Reissued and back in stock! In 1988 the Japanese government drops an atomic bomb on Tokyo after ESP experiments on children go awry. In 2019, 31 years after the nuking of the city, Kaneda, a bike gang leader, tries to save his friend Tetsuo from a secret government project. He battles anti-government activists, greedy politicians, irresponsible scientists and a powerful military leader until Tetsuo’s supernatural powers suddenly manifest. A final battle is fought in Tokyo Olympiad exposing the experiment’s secrets.

From the director of the cult classic the Hidden, a horror about a quartet of murderous psychopaths who break out of a mental hospital during a blackout and lay siege to their doctor’s house. Jack Palance, Donald Pleasence, Martin Landau, 1982.

A small-town Oregon teacher and her brother, the local sheriff, discover a young student is harbouring a dangerous secret that could have frightening consequences

Russian supernatural horror about a strange nanny, who may or may not be an ancient Slavic witch, who looks after the youngest daughter in a family that moved to the outskirts of the city. Svyatoslav Podgaevskiy, Nathalia Hencker, 2020.

A group of toy store employees must protect each other from a horde of parasite infected shoppers. Devon Sawa, Ivana Baquero, Ryan Lee, Casey Tebo, 2021.

Starring Tommy Lee Jones, Linda Hamilton, Robert Vaughn, a thief hired by the Justice Department to steal incriminating tapes hides them in the back of an experimental rocket car stolen by a hot car ring. Harley Cokeliss (1986)

Horror classic where a young couple travelling cross-country find themselves stranded in the small town of Gatlin, where they meet a mysterious religious cult of children. Fritz Kiersch (1984)

A geological expedition to an Appalachian sinkhole becomes a fight for survival against a mysterious force.

Based on the Ed Gein case, a deranged rural farmer becomes a grave robber and murderer after the death of his possessive mother whom he keeps her corpse, among others, as his companions in his decaying farmhouse. Alan Ormsby, 1974.

A mute boy is trapped in his apartment with a sinister monster when he makes a wish to fulfil his heart’s greatest desire. Ezra Dewey, Rob Brownstein, Tevy Poe, David Charbonier, Justin Powell, 2021.

A young couple who rent out their loft to a female artist who turns out to be deadly. Kelly Curran, Lorin Doctor, Ted Nicolaou, 2021.

Beloved cult film about a rescue crew investigates a spaceship that disappeared into a black hole and has now returned… from a DIMENSION OF PURE EVIL! Laurence Fishburne, Sam Neill, Kathleen Quinlan, Paul W.S. Anderson, 1997

A group of friends who venture into the remote Texas woods for a party weekend find themselves stalked by Bigfoot. Roger Edwards, Samuel Davis, Chris Osborn, Eduardo Sánchez (of Blair Witch fame), 2014.

This French Sci-Fi classic is a bizarre and beautifully animated futuristic story on a faraway planet, where blue giants rule and oppressed humanoids rebel against the machine-like leaders. René Laloux (1973)

In 1975, a group of five men are driving home after working in a forest when they see a mysterious light. Intrigued, Travis Walton (D.B. Sweeney) leaves the truck — only to be sucked up by a flying saucer. The other four men report the strange event, but they are skeptically interrogated by Lt. Frank Watters (James Garner), who suspects that murder is behind Walton’s disappearance. When Walton reappears five days later, his story of alien abduction is met with disbelief.

Michael returns to Haddonfield! 4K restoration of the 4th entry in the long running franchise.

Lead singer Joe Dick (Hugh Dillon) decides to reunite his cult punk band, Hard Core Logo, for a Canadian tour. But guitarist Billy Tallent (Callum Keith Rennie) is waiting to hear back from Jenifur, a popular Los Angeles–based group considering bringing him on — which causes tension with Joe, for whom Hard Core Logo is everything. Along with erratic bassist John Oxenberger (John Pyper-Ferguson) and hard-partying drummer Pipefitter (Bernie Coulson), the contentious duo take to the road.

Wax sculptor Henry (Vincent Price) is horrified to learn that his business partner, Matthew (Roy Roberts), plans on torching their wax museum to collect on the insurance policy. Henry miraculously survives a fiery confrontation with Matthew and re-emerges some years hence with a museum of his own. But when the appearance of Henry’s new wax sculptures occurs at the same time that a number of corpses vanish from the city morgue, art student Sue Allen (Phyllis Kirk) begins suspecting wrongdoing.

New father Frank (Emilio Estevez) departs for a night out, joining friends Mike (Cuba Gooding Jr.) and Ray (Jeremy Piven) as they head to a boxing match. At the last minute, they are joined by John (Stephen Dorff), Frank’s brother. Stuck in gridlock traffic, the guys take a shortcut that gets them lost. In a very dangerous neighborhood, they witness a murder by a gang leader called Fallon (Denis Leary). They flee, but Fallon now wants them hunted down and and eliminated.

When jobless Tommy Collins discovers that sequestered jurors earn free room and board as well as $5-a-day, he gets himself assigned to a jury in a murder trial. John Fortenberry (1995)

In North Dakota, two estranged sisters are driven to extremes when their mother dies, leaving them with one week to pay back her mortgage.

This “Lethal Weapon” spoof follows Los Angeles police officers Wes Luger (Samuel L. Jackson) and Jack Colt (Emilio Estevez) as they investigate the killing of fellow officer Sgt. Billy York (Whoopi Goldberg). On the strength of tips from stool pigeons like Becker (Jon Lovitz), Wes and Jack learn that the murder is linked to a plan by criminals Gen. Curtis Mortars (William Shatner) and Jigsaw (Tim Curry) to lace snack foods with hard drugs. They must stop the plot before it begins causing harm.

A widowed single mother, raising her violent son alone, finds new hope when a mysterious neighbor inserts herself into their household. Xavier Dolan, 2014.

An alien trying to seduce a shy Earth physicist to gain control of his research accidentally falls in love with him. Dan Akroyd, Kim Basinger, Seth Green, Alyson Hannigan, 1988.

Frank Drebin (Leslie Nielsen), a rather clueless police detective, tries to foil a plot to turn innocent people into assassins through mind control. After his partner, Norberg (O.J. Simpson), is shot, Frank sets out to find the culprit, leading him to business tycoon Vincent Ludwig (Ricardo Montalban). However, Frank has no evidence until he meets Jane Spencer (Priscilla Presley), Ludwig’s assistant. She knows nothing about Ludwig’s devious plans, but falls for Frank and agrees to help him.

In this 90s neo-noir a troubled businessman’s life is upturned after the arrival of a mysterious female temp worker in his office. Timothy Hutton, Lara Flynn Boyle, Faye Dunaway, Tom Holland, 1993.

After Dr. Bronson (Hayden Rorke) discovers Zyra, a new planet, fellow astronomer Dr. Hendron (Larry Keating) checks Bronson’s data and reaches the horrifying conclusion that Bellus, a star in Zyra’s orbit, is doomed to crash into the earth within a matter of months. Meanwhile, Hendron’s daughter, Joyce (Barbara Rush), has grown fond of pilot David Randall (Richard Derr), and pleads to have him brought along as a small group is relocated to Zyra to avoid the impending mass destruction.

A meek psychiatrist begins to get turned on by the tales of bondage & great sex confided to her by patient only to discover that they involve her new boyfriend. Annabella Sciorra, Deborah Kara Unger, Jamey Sheridan, Alan Alda, Anthony LaPaglia, 1992.

And there we go guys. Some sexy stuff coming our way either this Thursday or Friday god willing. See you all soon!

Good Evening…We Have Exciting New Titles Coming To The Shop This Week.

First week of October brings all types of goodies to The Lobby DVD Shop so let's dig in and take a look...

Another Week Of Goodness At THe Slaughtered Lamb…I Mean The Videostore.

As we enter the month of August the hot days of summer stay with us dear friends. Thankfully the weekly shipment of...