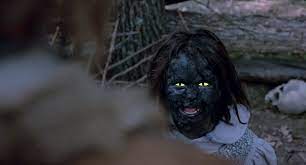 Well guys, pretty exciting week of cinema coming to the shop this week. It is a big order covering ninjas, crazy Hong Kong insanity, and folk horror, so much folk horror. From some classic best sellers to remakes of 80s slashers the videostore is pumped for this shipment. It is a big one and will likely be the last one of it’s size for quite awhile so please take a look and see what goodness you guys need to cover your shelves. Cheers!

Forgotten Spanish underground horror film that is equal parts strange and inscrutable – a B-movie director & goblin like drug addict who attempts to film his addled consciousness get lost in their shared addiction to cinema. Iván Zulueta, 1979.

A British film censor sets out to solve the mystery of her sister’s disappearance & source of her grief, embarking on a quest that dissolves the line between fiction and reality. Niamh Algar, Michael Smiley, Nicholas Burns, Prano Bailey-Bond, 2021.

A NASA Mars mission won’t work, and its funding is endangered, so they decide to fake it just this once. But then they have to keep the secret… Hal Holbrook, O.J. Simpson, James Brolin, Sam Waterston, Elliott Gould, Peter Hyams, 1977.

Classic adult film about a newly appointed VP of a cosmetics firm who wants to alter the balance of career versus her personal life and so goes out with the intention of picking up several men. Leslie Bovee, John Leslie, Kay Parker, Bonnie Holiday, 1979.

Great documentary on the life of director Kevin Smith.

From direstor RALPH BAKSHI! Stylised tale of two young women in 1950s Los Angeles who have a double wedding – but problems arise shortly afterwards when one of them has an affair with a local Romeo. When her husband discovers the truth, disaster is on the horizon. Produced for American cable television as part of a series paying homage to 1950s B-movies.

First Time On Blu Ray! Klaus Kinski stars in this uneven Alien rip off about a space geological team discover on one of Saturn’s moons a giant, prehistoric alien which intends to eat, and absorb the essences of all humans… Willian Malone, 1985.

Seven years ago, a mysterious monster was found deep in a rural coal mine. Since then, rumors of a plague spread through the small town, and people experience an unexplainable mental illness.

In 1930s Los Angeles, Hollywood shines like a beacon to all the helpless people scattered across the city. In one crumbling apartment block, a blond bombshell (Karen Black) aspires to be an actress, an artist (William Atherton) looks for legitimacy, and a child actor performs a gross homage to Mae West. Cockfights and poverty prevail out of the glow of show business. Introverted accountant Homer Simpson (Donald Sutherland) watches as society collapses under greed and ambition.

Bizarro obscurity, largely notable for being labelled a Video Nasty in the UK, about a PTSD suffering & psychopathic Vietnam vet who is recruited by a cabal to act out their vengeance. Turk Cekovsky, Debi Chaney, Terry TenBroek, Peter Maris, 1979.

Regarded by some highly suspect horror fans as two of the greatest Italian horror films ever made by Lamberto Bava presented here in 4k!

Chinese action-comedy about a goofball who, after being rejected from the police college, travels to Bangkok where he and an energetic distant relative must solve a murder case. Sicheng Chen, 2015.

A historical thriller/horror hybrid based on a videogame about schoolkids secretly flouting the ban on left-wing literature in ’60s Taiwan. John Hsu, 2019.

One of director EDGAR WRIGHT’s favourtie films. A filmmaker sets out to discover the mystery of a 38-year-old Londoner whose body was discovered decomposing in her apartment more than two years after her death. Carol Morley, 2011.

The Bob Hope of bosomy camp horror comedy! Set in Victorian times, Elvira & her maid end-up spending the night at an old creepy castle when they hitch a ride with a local. Written by John Paragon. Richard O’Brien, Mary Scheer, 2001.

Long unavailable! One of great works of Folk Horror! An adulterous preacher and his followers flee to ‘the promised land’ only to enter a valley of lust, madness, pagan vengeance and hallucinatory terror. Avery Crounse, 1983.

In the distant future, a federation marshal arrives at a research lab on a remote planet where a genetic experiment has gotten lose and begins feeding on the dwindling scientific group. Roger Corman produces. 1982.

Once an architect, Frank Bannister (Michael J. Fox) now passes himself off as an exorcist of evil spirits. To bolster his facade, he claims his “special” gift is the result of a car accident that killed his wife. But what he does not count on is more people dying in the small town where he lives. As he tries to piece together the supernatural mystery of these killings, he falls in love with the wife (Trini Alvarado) of one of the victims and deals with a crazy FBI agent (Jeffrey Combs).

When a single mother and her two children move to a new town, they soon discover they have a connection to the original Ghostbusters and the secret legacy their grandfather left behind.

An intimate portrait of former Soviet leader Mikhail Gorbachev living alone in an empty house outside Moscow, still carrying the burdens of his past. Vitaly Mansky, 2021.

Ronnie (Michael St. Michaels) runs a disco walking tour along with his browbeaten son, Brayden (Sky Elobar). When a sexy, alluring woman named Janet (Elizabeth De Razzo) comes to take the tour, it begins a competition between father and son for her attentions. It also brings about the appearance of an oily, slimy, inhuman maniac who stalks the streets at night and strangles the innocent-soon dubbed the Greasy Strangler.

When a vintage Jack-in-the-box is donated to a museum, Casey’s colleagues die one by one. He soon has reason to believe that the creepy doll in the box might have a life of its own and may be connected to the mysterious deaths around him.

Kevin Smith’s follow up to his cult hit Clerks. Simultaneously dumped by their girlfriends, a comic book obsessive and best friend plan to ease the pain of their losses by taking take a trip to the local mall. 1995.

Veterans wake up after a night out partying together, and discover that the zombie apocalypse has spread across the entire United States.

Terrifying and darkly comic Hollywood debut of Roman Polanski is a wildly entertaining nightmare about a young pregnant woman who believes there is a satanic plot against her. Mia Farrow, John Cassavetes, Ruth Gordon. 1968.

In one night, a red flash fills the planet’s sky, instantly paralyzing mankind into a bloody feast for the alien invaders. But there is hope, as Ral Foster wakes up to find himself unaffected. After discovering his neighbor is also immune to the red shock, they team up and set course for an underground military base.

In the dark days of World War II, the Nazi High Command ordered its scientists to create a top secret race of indestructible zombie storm troopers – un-living, unfeeling, unstoppable monstrosities that killed with their bare hands.

Reimagining of the cult 80s horror about girls who go to the woods to party only to be slaughtered with various sharp implements. Danishka Esterhazy, 2021.

In the small South American town of Porvenir, four men on the run from the law are offered $10,000 and legal citizenship if they will transport a shipment of dangerously unstable nitroglycerin to an oil well 200 miles away. Led by Jackie Scanlon (Roy Scheider), the men set off on a hazardous journey, during which they must contend with dangerously rocky roads, unstable bridges, and attacks from local guerillas. The four fight for their lives as they struggle to complete their dangerous quest

In this gory 90s horror film, a rape victim returns from the dead to seek vengeance on her rapists. Clare Wren, Bruce Davison, Ernest Farino, 1991.

Back in Stock! The UMBRELLA BLU RAY EDITION of the cult film that includes the EXTENDED film workprint.

A man falsely accused of killing his wife encounters one busty babe after another until he meets a super siren.

Tales Of The Dim follows the tales of random characters who go under unfortunate events which causes them to die in horrible ways. Tales Of The Dim is an American animated internet horror series created by Frank Sudol (known for City Of Rott, Dead Fury, and Shock Invasion).

A group of young friends stranded at a secluded roadside museum are stalked by a masked assailant who uses his telekinetic powers to control the attraction’s mannequins. Score by Pino Donaggio. Chuck Connors, Tanya Roberts, Linnea Quigley, 1979.

A year after the death of his wife, a man enlists her sister to help him bring her back from the dead. Jacob A. Ware, Christine Nyland, Terence Krey, 2020.

And there we go guys. Personally I’m pretty excited for some of these titles coming. Hope you feel the same way. New movies should be here on Thursday and remember till Wednesday the shop is having a 2 FOR 1 SALE. Cheers!

The Month Of October Keeps Rolling With Cinema…

The weather keeps dropping, the leaves keep falling, and the back streets of the city are looking like Haddenfield which can only...

Another year comes to an end. The world is completely uncertain once again. 2022 could be better or could be worse. In...

Thank You House Of Heathens…From The Video Store.

I sit here tonight sleepless and restless after an amazing day or what should feel like one. Great day at the shop...