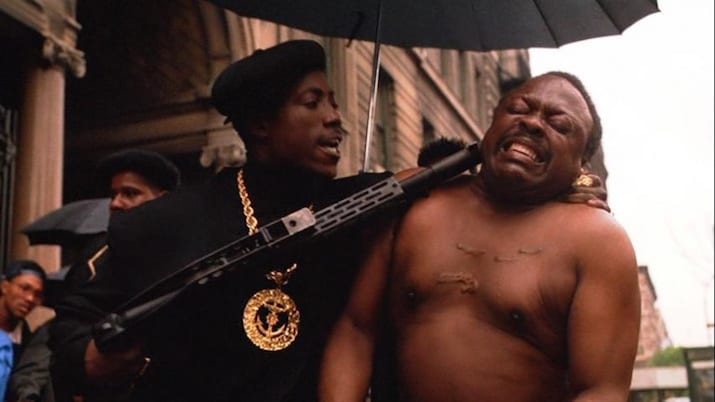 It is time once again my friends to make a time this week and come on down to the METRO CINEMA to go back in time. Back To 1991! Thanks to BOOM BAP CINEMA we are being given the chance to see one of Wesley Snipes’ greatest roles he has ever been given. A role that made it very clear he had leading man charisma. The iconic character of Nino Brown and his crew of “Cashmoney Brothers” would leave their mark on urban gangster cinema.

With the West Coast bringing films like Boyz In The Hood and Menace II Society making their mark the East Coast was bringing it with films like Juice and New Jack City. Now Juice was another fantastic film that represented the time, style, music, fashion of the late 80s but something about New Jack always stuck with me. The pacing, the story of a small time criminal rising to the top, the real life problem of crack cocaine, and ofcourse one sweet soundtrack that has aged like wine, yes, even the Color Me Badd song. But the best part of the film is the chemistry. The chemistry between the two groups of actors.

Led by Nino Brown the C.M.B. were also made up by Allen “Gee Money” Payne, Bill “Duh Duh Man” Nunn, Christopher “Kareem Akbar” Williams, and Vanessa “Keisha” Williams. Loyal, ruthless, cold-hearted, an obsession with power, and surprisingly deep friendships were all portrayed perfectly by these group of actors. The comparisions to SCARFACE have been made repeatedly with this movie and rightfully so but that is not a bad thing. In the beginning Nino Brown is an equal with his peers just like Tony Montana but as the money, greed, and power begin to build up he begins to believe his king-like status and starts leaving the others behind which in any great rise and fall story is the character’s downfall.

Now on the other end of things with have the group of characters that are looking to bring down Nino and his gang, each with their own reasons. Led by Mario “Stone” Van Peebles, who also directed the film following his father Melvin Van Peebles’ footsteps. Van Peebles Sr. is the man who gave the world Sweetback’s Badass Song. Joining him is Ice T as Scott Appleton, Judd Nelson as Nick Peritti, and Russel Wong as Park. Unlike Scarface we get to see the group that is determined to take down the CMB gang and the chemistry between them, especially Ict-T and Judd Nelson which is fantastic. This movie proved that a hip hop artist like Ice-T could take his music career and turn it into the world of film quite convincingly.

I would be silly not to mention the side story that involves Ict-T’s Appleton character with Chis Rock’s Pookie. In the beginning of the film Pookie is simply a street hustler who gets wounded by Appleton in an undercover bust. Time goes by and we see that Pookie has now become one of the many victims of addiction to the crack cocaine epidemic. Appleton is determined to help him and get him clean. Give Rock credit in one of his earlier screen roles as this character. He shows a dramatic and tragic side with his acting ability that works and should not be overlooked in this film.

At the heart of it all New Jack City is simply a great gangster film with gripping characters, betrayal, street violence, street justice, and a poetic climax that made people think of what certain individuals were willing to sacrifice in their own community to better their own lives. And can we talk about the other star of the film…the music.

After I saw the movie on VHS in ’91 I immediately went out and bought the soundtrack on cassette tape. If everything else was setting up the feel and vibe of the film the music used was the final touch to make it a classic. The album was a huge hit on the billboard charts with great tunes by Ice-T, Keith Sweat, and Color Me Badd. For me personally the stand out song was “For the Love of Money/Living for the City,” performed by Troop, LeVert, and Queen Latifah. It set the tone right from the beginning and closes the movie out as well. Almost 30 years later the soundtrack is still fabulous.

So with all that being said I’m insanely excited that my friend Ramneek Tung and his BOOM BAP CINEMA series is bringing this contempary classic back to the big screen for ONE NIGHT ONLY on Thursday, Dec. 12th at 9:30pm at the METRO CINEMA. Following such great screenings as Krush Goove, Beat Street, Candyman, and even House Party this series of hip hop influenced films has been a great experience to see in the cinema and I hope you all decide to come on down for this latest installment.

“Drug tycoon Nino Brown and his minions have rapidly risen to the top of the New York City narcotics trade. Under Nino’s heartless leadership, the drug operation has grown into a multimillion-dollar empire. Scotty and Nick, two police officers who know their way around the streets of Harlem, aim to bring Nino and his cohorts down. To do so, though, they’ll have to play by Nino’s rules and go undercover.”

A New Month Brings Us New Movies To The Videostore…

Back In Stock! After the death of her parents, a young girl arrives at a convent and...