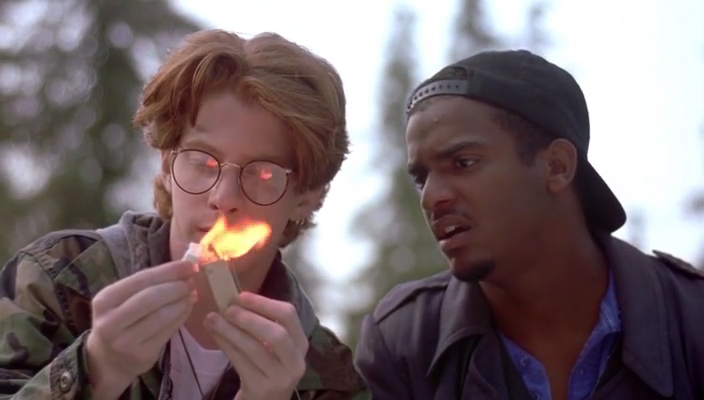 Well so begins the month of finding your friends and family the craziest movie gifts for the holiday season. The videostore is very excited to help you out with this week’s batch of goodness. Lost classics coming back and looking better than ever along with some new, best sellers, and WTF titles to go along with it. Let’s dive in shall we…

When his friend Huang (Tony Leung Ka Fai) visits mercenary Ou-yang (Leslie Cheung), they trade stories including that of princess Mu-rong (Brigitte Lin), who is alternately male and female. Peach Blossom (Carina Lau) quarrels with her blind husband (Tony Leung Chiu Wai), a swordsman who wants to avenge the bereavement of a peasant girl (Maggie Cheung). The girl also attracts the favors of the swordsman Hung Chi (Jacky Cheung), who is forever trailed by his doting wife (Li Bai).

BACK IN STOCK! The cult sensation in a deluxe DVD edition. The film is an astonishingly incompetent and bizarre romantic thriller from first-time director James Nguyen.

BACK IN STOCK! Two classics from the 90s return to the shop in this double feature set.

A psycho in a Santa suit gets to decide who’s been naughty and who’s been nice. Lewis Jackson, 1980.

A young woman who works in a beauty parlor discovers that her vagina can talk, which causes her no end of trouble

Filipino coming-of-age set in Manila during the 1990s, a group of friends struggle with becoming adults and leaving childish things behind. Raya Martin, 2020.

A group of teens are unwittingly stranded near a strange wax museum and soon must fight to survive and keep from becoming the next exhibit. Elisha Cuthbert, Chad Michael Murray, Brian Van Holt, Jaume Collet-Serra, 2005.

After saving the life of his royal father’s usurper, Pelias (Douglas Wilmer), whom he fails to recognize, Jason (Todd Armstrong) is encouraged by the conniving murderer to begin a quest in search of the Golden Fleece. In doing so, Pelias hopes for Jason’s death to thwart the prophecy that he will reclaim the throne. Along the journey, Jason is protected by the goddess Hera (Honor Blackman), and his crew includes Hercules (Nigel Green) and Acastus (Gary Raymond), a saboteur planted by Pelias.

A crazed serial killer unleashes mayhem in a movie theater in this Uruguayan homage to 80’s slasher and Italian giallo films. Maximiliano Contenti, 2020.

Ultra-rare splatterrific weirdo horror-comedy about a bunch of tourists who happen upon a forgotten-to-time Mexican village where a diabolical ritual has unleashed Hell on Earth. Somtow Sucharitkul, 1990.

Starring Bill Pullman, Patricia Arquette. After a bizarre encounter at a party, a jazz saxophonist is framed for the murder of his wife and sent to prison, where he inexplicably morphs into a young mechanic and begins leading a new life. David Lynch (1997

BACK IN STOCK! Ami loses her brother to yakuza bullies then her arm when she seeks retribution. Two mechanics take pity on her and create a new limb out of a machine gun allowing her and a chain-saw wielding woman to seek out their revenge.

After a stint in prison for his first robbery attempt, during which he is badly abused, Daniel Morgan (Dennis Hopper) swears revenge on those who ruined his life. Like the outlaws of the American West, Morgan, aided by an aborigine sidekick named Billy (David Gulpilil), becomes a folk hero among the Australian people, while those in power begin to worry about the trouble he is stirring up. Soon Mad Dog Morgan is Public Enemy No. 1, but neither he nor Billy intends to go down easily.

Paralyzed by fear from shocking visions, a woman’s torment worsens as she discovers her waking dreams are terrifying realities.

An evil ninja attempts to avenge his death from beyond the grave, by possessing an innocent woman’s body. Sam Firstenberg (1984)

A frustrated, angst-ridden teenage girl awakens something in the woods when she naively performs an occult ritual to evoke a witch to kill her mother. Adam MacDonald (2017)

In this Hong Kong action film, Donnie Yen stars as a righteous cop out to takedown a gang of elusive and deadly criminals. Nicholas Tse, Benny Chan, 2021.

One of the most wildly popular horror movies of all-time, Stuart Gordon’s enduring splatter-comedy classic returns to Blu-ray in a stunning restoration packed with special features! Stuart Gordon (1985)

The Complete Re ANimator Saga in one sweet set.

In 1976, a Mi’gMaq teenager (Devery Jacobs) plots revenge against the sadistic Indian agent (Mark Antony Krupa) who imprisoned her in a residential school where rape and abuse are common.

Frustrated by the lack of intimacy in her relationship, a young schoolteacher goes through a series of sexually explicit intimidating and often violent sexual partners. Caroline Ducey, Rocco Siffredi, Catherine Breillat, 1999.

Sean Bateman is a freshman at Camden College, who’s in love with Lauren Hyde. She’s waiting for her wastrel boyfriend Victor Johnson to come back from a trip around Europe, while Paul Denton, who used to date Lauren, is exploring his bisexual side with a crush on Sean

Highly original low budget zombie movie where the living continue to live on with all their faculties in a dead body while a young woman tries to survive as the dead try to convince her to join them. Scooter McCrae, 1994.

Spectacular camp drag comedy about a stripper who falls down a rabbit hole of underworld crime. D’Arcy Drollinger, 2020.

In Seattle during the era of grunge music, the lives and relationships of a group of young people, all living in the same apartment building, go through a period of flux. Among them are waitress and aspiring architect Janet (Bridget Fonda), who finds herself obsessed with bad boy musician Cliff (Matt Dillon) ; Linda (Kyra Sedgwick), an emotionally fragile environmentalist on the look-out for love; and Steve (Campbell Scott), a quintessential nice guy who studies traffic patterns.

A student, possessed by the spirit of a cannibal-ghost buried beneath Alcatraz, released from his grave by a dead rock star. In order to exorcise the spirit from his dreams, he & his most foolhardy friends head for Alcatraz in the night. Toni Basil, 1988

Back In Stock! In this Russian horror film, the lone survivor of an enigmatic spaceship incident hasn’t returned back home alone-hiding inside his body is a dangerous creature. Egor Abramenko, 2020.

Confident NASCAR driver Stroker Ace (Burt Reynolds) runs into problems when a confrontation with his commercial sponsor causes him to lose his contract. Clyde Torkel (Ned Beatty), the owner of a fried-chicken chain, immediately asks Stroker to be the face of his company. After some pushing by Clyde and his marketing executive, Pembrook Feeney (Loni Anderson), Stroker signs on without even reading his obligations. He then finds himself legally bound to a horrible contract, with no end in sight.

Contemporary Canadian 80’s throwback horror – a group of teenage friends spy on a police officer neighbour in the belief that he is a serial killer. Graham Verchere, Judah Lewis, Caleb Emery, 2018.

A funeral director tells four strange tales of horror with an African American focus to three drug dealers he traps in his place of business. Rusty Cundieff, 1995.

Male nurse Benigno (Javier Cámara) becomes infatuated with a complete stranger when he watches dancer Alicia (Leonor Watling) practicing from the anonymity of his apartment. After being injured in a car accident, Alicia is brought to a nearby hospital, where Benigno serendipitously happens to be her caregiver. When wounded bullfighter Lydia (Rosario Flores) is brought into the same ward, her companion, writer Marco (Darío Grandinetti), begins to bond with Benigno.

An assortment of unruly and misfit teens have all been forced to attend camp at a wildlife preserve which happens to be next to a an illicit marijuana growing op that uses a pesticide that mutates ticks to gigantic size. Rosalind Allen, Seth Green, 1993.

Mexican fantasy horror. A dark fairy tale about a gang of five children trying to survive the horrific violence of the cartels and the ghosts created every day by the drug war. Issa López (2017)

Malcolm McDowell stars as H.G. Wells, who pursues Jack the Ripper to the 20th Century when the serial murderer uses the future writer’s time machine to escape his time period. Nicholas Meyer (1979)

Interwoven stories demonstrate that some traditions are best not forgotten as the residents (Anna Paquin, Brian Cox, Dylan Baker) of a small town face real ghosts and goblins on Halloween. Tales of terror reveal the consequences of extinguishing a Jack-o-Lantern before midnight and a grumpy hermit’s encounter with a sinister trick-or-treater.

A teenager who witnesses the murder of his father vows to exact revenge on the four mobsters involved in the killing in this daring and provocative thriller. Cliff Robertson, Samuel Fuller, 1961.

As the president of a trashy TV channel, Max Renn (James Woods) is desperate for new programming to attract viewers. When he happens upon “Videodrome,” a TV show dedicated to gratuitous torture and punishment, Max sees a potential hit and broadcasts the show on his channel. However, after his girlfriend (Deborah Harry) auditions for the show and never returns, Max investigates the truth behind Videodrome and discovers that the graphic violence may not be as fake as he thought.

It had been a year since Dr. Norman Spencer (Harrison Ford) betrayed his beautiful wife Claire (Michelle Pfeiffer). But with Claire oblivious to the truth, Norman’s life and marriage seem so perfect that when Claire tells him of hearing mysterious voices and seeing a young woman’s image in their home, he dismisses her terror as delusion. Claire moves closer to the truth and it becomes clear that this apparition will not be dismissed, and has come back for Dr. Spencer and his beautiful wife.

THE FINAL CUT! A righteous police officer investigates the disappearance of a young girl on an island inhabited by a cult of pagans. Edward Woodward, Christopher Lee, Britt Ekland, Ingrid Pitt.

In New York, racist Capt. Stanley White (Mickey Rourke) becomes obsessed with destroying a Chinese-American drug ring run by Joey Tai (John Lone), an up-and-coming young gangster as ambitious as he is ruthless. While pursuing an unauthorized investigation, White grows increasingly willing to violate police protocol, resorting to progressively violent measures — even as his concerned wife, Connie (Caroline Kava), and his superiors beg him to consider the consequences of his actions.

And there we go guys! Lots of fun stuff coming in to add to your collection or makes for a good gift to a friend. Also don’t forget another gift idea is the LOBBY GIFT CARDS back in stock! Either way…See you later. Cheers!

It’s A Shpadoinkle Week At The Videostore With The New Releases!

Another week of goodness hits the shop including the long needed return of the cult classic Cannibal The Musical! A personal favourite...