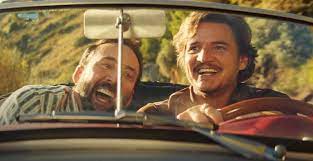 Another week is upon us and we got some fun stuff hitting the shelf. Some classics, some lost gems, some never heard of stuff, and god damn Nic Cage! Nuff said…let’s get to it!

A vicious street gang controls a high school with violence but only an an ex-gang-member-gone-good can challenge their brutal reign. Adam Baldwin, Jesse Aragon, Rene Auberjonois, 1986.

The story of a man whose family has doubts about whether he’s still human after going off to kill a vampire.

In this neo noir, a young man is reunited with his career criminal father, thinking that he’s found his ticket to an exciting life of crime, only to discover he’s dead wrong. Sean Penn, Christopher Walken, Mary Stuart Masterson, James Foley, 1986.

A mentally-disturbed teenager kidnaps and brainwashes children into cannibalistic psychopaths – but not when the adults intervene. Mik Cribben, 1989.

Beloved 50’s b movie about an evil alien brain from the planet Arous who hijacks the body of an Earth scientist in order to control the Earth. John Agar, Joyce Meadows, Robert Fuller, Nathan Juran, 1957.

When Ted’s beloved cat dies, the trauma triggers a mental breakdown. His broken brain prompts him to bring his feline friend back – all he needs is nine human lives. Dave Jackson (2015)

According to folklore, Chupa kills small livestock, living off their blood. But why has it started preying on people? To answer that question, a small Federal, military, and civilian task force has been sent deep into Ohio’s expansive Cuyahoga Valley National Park to find and capture the mythical monster.

Premise. Keira Woods (Elisha Cuthbert) has moved into a new house with her husband, son, and daughter. When her daughter mysteriously vanishes in the cellar, she soon discovers there is an ancient and powerful entity controlling their home that she will have to face or risk losing her family’s souls forever.

Mitchell Parker lies dead on a morgue slab. In life, Mitchell served the low ranks of debt collectors. He thought his luck was in when on a routine collection he stumbled across £100,000 cash hidden in the flat of one of his clients

BACK IN STOCK! In this intense thriller, 5 young adventurers retrace the steps of a doomed group of hikers in pursuit of a legendary paranormal mystery. Richard Reid, Gemma Atkinson, Renny Harlin, 2013.

A demented coroner uses autopsy equipment to kill off the teenagers who trespass on the long-abandoned asylum he inhabits. Filmed on location in an actual abandoned asylum. Richard Friedman (1987)

BACK IN STOCK! Starring Kurt Russell, Steve Buscemi. Snake Plissken is once again called in by the United States government to recover a potential doomsday device from Los Angeles, now an autonomous island where undesirables are deported. John Carpenter (1996)

A beautiful young woman with unusually big thumbs, Sissy Hankshaw (Uma Thurman) decides, fittingly enough, to become a hitchhiker. After finding work as a model for feminine products, Sissy goes to shoot an ad at the Rubber Rose, a ranch owned by the Countess (John Hurt), the company’s flamboyant cross-dressing head. While at the ranch, Sissy meets numerous other eccentric characters, including an outgoing and rebellious cowgirl named Bonanza Jellybean (Rain Phoenix).

Theta Pi Gamma fraternity’s newest pledge–a gawky, innocent, and utterly uncool bookworm–and two of his self-confident fraternity brothers embark on a week-long vacation in Palm Springs. Can they transform him into a real Casanova? James Frawley (1985)

Ronnie (Michael St. Michaels) runs a disco walking tour along with his browbeaten son, Brayden (Sky Elobar). When a sexy, alluring woman named Janet (Elizabeth De Razzo) comes to take the tour, it begins a competition between father and son for her attentions. It also brings about the appearance of an oily, slimy, inhuman maniac who stalks the streets at night and strangles the innocent-soon dubbed the Greasy Strangler.

Guests mysteriously die at a mountain inn run by a family of oddballs, so – fearing bad publicity – the family bury the bodies of their ill-fated guests themselves.

When a satanic cult unleashes hell on earth on a nearby southwestern town, a sheriff and his ragtag crew are tasked with becoming heroes or demon food. Tony Todd, Adrienne Barbeau, Meg Foster, Billy Zane, Bruce Dern, Justin Lee, 2022.

American comedy horror, with an estimated budget of $500, about a college grad who moves into a house and discovers that it might have been a bad idea. From the writers of Sonic the Hedgehog. Worm Miller, 2003.

BACK IN STOCK! Swedish documentary. Fictionalized documentary showing the evolution of witchcraft, from its pagan roots to its confusion with hysteria in modern Europe. Benjamin Christensen (1922)

Unusual giallo set in a lakeside hotel during WWII where a young woman runs the hotel while fending off sex-crazed guests and a cloaked figure murdering her guests. Luc Merenda, Leonora Fani, Francisco Rabal, Francesco Barilli, 1978.

Rare TV movie horror about a withdrawn young girl who joins an unpopular sorority in college. While there it turns out she has psychic and telekinetic powers, and which she uses them against a rival sorority. Kay Lenz, Shelley Winters, Morgan Fairchild

Taking its title from an archaic Japanese word meaning “ghost story,” this anthology adapts four folk tales. A penniless samurai (Rentarô Mikuni) marries for money with tragic results. A man stranded in a blizzard is saved by Yuki the Snow Maiden (Keiko Kishi), but his rescue comes at a cost. Blind musician Hoichi (Katsuo Nakamura) is forced to perform for an audience of ghosts. An author (Osamu Takizawa) relates the story of a samurai who sees another warrior’s reflection in his teacup.

A serial killer ruthlessly hunts down a deaf woman through the streets of South Korea after she witnesses his brutal crime. Wi Ha-Joon, 2021.

In this sexy thriller a career bank robber and a female U.S. Marshal are forced to share a car trunk during his escape from a Florida prison which results in a cross country chase / love affair. George Clooney, Jennifer Lopez, Steven Soderbergh, 1998.

An early anime film by Isao Takahata (Grave of the Fireflies) & Hayao Miyazaki (My Neighbor Totoro) about a lonely young girl who adopts & is adopted by a pair of pandas who go on adventures with her.

Feature length animated film from Satoshi Kon about A pop singer gives up her career to become an actress, but she slowly goes insane when she starts being stalked by an obsessed fan and what seems to be a ghost of her past. 1997.  \

Kit Walker is the latest in a line of heroes known as The Phantom, whose powers are drawn from three ancient skulls, but now the Phantom’s enemies, the Pirates of the Sengh Brotherhood, have a new ally: the ruthless Xander Drax.

Double feature of roughie sexploitation films: THE RAVAGER / THE BUSHWHACKER

When archcriminal Mr. Midnight plots to take over the world, humanity’s only hope is World War II’s formerly indestructible ‘Legend In Leotards’ who is now a burnt-out drunk in this long-unseen 1982 action-comedy. Alan Arkin, Christopher Lee.

Following the events of the previous film, a lesbian couple are determined to eliminate the most corrupt, evil forces of Tromaville and the world. Lloyd Kaufman (2017)

Japanese horror. In 1998 director Hideo Nakata unleashed a chilling tale of technological terror and redefined the horror genre, launched the J-horror boom in the West and introduced a generation of moviegoers to a creepy, dark-haired girl called Sadako.

Traveling to a wedding on Halloween, Trevor (Karl Jacob), Allison (Vanessa Horneff), Brian (Sean Reid) and Elliot (Wil Horneff) are four friends lucky to be alive after crashing their car. Stranded in the Pennsylvania countryside, the foursome set off in search of help — only to discover that making it to the wedding on time is the least of their problems. Stumbling to a nearby farm, the friends have no way to prepare for the roost of lurking vampire bats in the barn and zombies in the house.

Ultra gory inventive Taiwan-set horror in which a virus turns the infected into monsters propelled by their worst instincts. Rob Jabbaz, 2021.

A lifeguard assembles an unlikely team to embark on a suicide mission to save the west coast from a dangerous anomaly.

The definitive documentary on the history of nudity in feature films from the early silent days to the present, studying the changes in morality that led to the use of nudity in films while emphasizing the political, sociological and artistic changes that shaped that history.

Bizarre Serbian horror-comedy! A flower seller in Belgrade frustrated by his lack of business decides strangle young women. A rock musician inspired by the crimes writes a hit rock song about them and decides to go on a strangling spree as well. 1984.

A sweet lo-fi fantasy that suggests a near future in which our sleeping hours are up for sale. Kentucker Audley, Albert Birney, 2021.

Charles Band’s cult classic! A cop / bounty hunter from the bleak Los Angeles of the future travels back in time to stop an evil criminal who uses powerful hypnotic powers to convert people into zombie like creatures known as trancers. Tim Thomerson

James Earl Jones stars in this 70s TV movie about a couple who learn that they were abducted by aliens. Estelle Parsons, Barnard Hughes, 1975.

Unfulfilled and facing financial ruin, actor Nick Cage accepts a $1 million offer to attend a wealthy fan’s birthday party. Things take a wildly unexpected turn when a CIA operative recruits Cage for an unusual mission. Taking on the role of a lifetime, he soon finds himself channeling his most iconic and beloved characters to save himself and his loved ones.

When the crew of an American tugboat boards an abandoned Russian research vessel, the alien life form aboard regards them as a virus which must be destroyed. Jamie Lee Curtis, William Baldwin, Donald Sutherland, John Bruno, 1999.

After a fallen tree bisects their house in Tornado Alley, a father hustles his family into the bathroom and slowly begin to lose their minds. Sean King O’Grady, 2021.

A young soldier, monks and a priest seek celestial swords that will help protect an immortal from threatening evil.

And there we go guys…some really sweet stuff hitting the shop this week. I’m excited. Hope you are too. And always remember…the videostore luvs you. Cheers!

Welcome To Oldfield! Thoughts On An 80s Anthology Gem.

Revisiting some flicks from the past can be painful. Movies you loved when you were a kid growing up somehow have changed...

Well guys, not much to say. The world is going through crazy times and while we wait for things to get back...