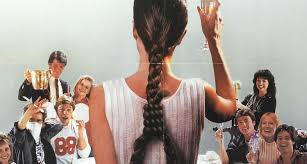 Well guys, the strange times continue and I will do my best to keep some nomality in all of this the only way I know how. By bringing in more old school, new school, and forgotten cinema gems for you to take home. So here the handful of titles that trickle into the shop this week…

A young man carrying a big basket that contains his extremely deformed Siamese-twin brother seeks vengeance on the doctors who separated them against their will. Frank Henenlotter (1982)

Intriguing action film written by John Carpenter which apparently acted as a template for the later Die Hard about double crossing thieves and a supercar. Tommy Lee Jones, Linda Hamilton. 1986.

Back In Stock! With a third entry coming down the pipeline it’s always good to have the first two back on the shelves.

Back In Stock! Beloved horror anthology which tells five terrifying tales based on the E.C. horror comic books of the 1950s. George A. Romero (1982)

Back In Stock! An artist who has yet to complete anything significant in his career, builds a fort in his living room out of pure frustration, only to wind up trapped by the fantastical pitfalls, booby traps, and critters of his own creation. Bill Watterson (2017)

An artist who has yet to complete anything significant in his career, builds a fort in his living room out of pure frustration, only to wind up trapped by the fantastical pitfalls, booby traps, and critters of his own creation. Bill Watterson (2017)

A simple story of a conman with eyes on a family’s hotel business becomes a horrifying fever dream of ghosts and gore in this insane cult film from Taiwan. Jen-Chieh Chang (1981)

Collector’s Edition of a woman is tormented and sexually molested by an invisible demon.

Back In Stock! The UNRATED CUT of the 2013 remake.

Video game expert Alex Rogan finds himself transported to another planet after conquering The Last Starfighter video game only to find out it was just a test. He was recruited to join the team of best starfighters to defend their world from the attack.

A ridiculously inept horror about a buxom woman posessed by a demon who murders anybody who gets in her way. Bobbie Bresee, Marjoe Gortner, Norman Burton, Maurice Sherbanee, LaWanda Page, Chu Chu Malave, Michael Dugan, 1982

Part four of a multi-part documentary series, this DVD begins with the late 60’s era Blacula and Splatter films; then moves on to the cinematic evolution of the 70’s with The Invasion of the Body Snatchers, The Planet of the Apes, and The Exorcist.

Underrated Costner flick. A well-respected businessman is sometimes controlled by his murder and mayhem-loving alter ego.

Lone survivor, doctor Robert Neville, struggles to create a cure for the plague that wiped out most of the human race while fighting The Family, a savage luddite death cult formed by the zombie-like infected to erase the past.

A young mother decides to become a stripper to earn some fast cash only to find her worst nightmares are about to begin when she falls into the hands of a religious fanatic intent on changing her “”evil”” ways. Jake Kennedy (2009)

The true story of an English boxer incarcerated in one of Thailand’s most notorious prisons as he fights in Muay Thai tournaments to earn his freedom. Jean-Stéphane Sauvaire (2017)

The remarkable career of the movie industry’s most admired and influential special-effects auteur, the legendary Ray Harryhausen, is the subject of Gilles Penso’s definitive documentary Ray Harryhausen: Special Effects Titan.

Heather and her best friend Morgan make the mistake of meeting up with friends at an abandoned haunted attraction. Inside the decrepit scarehouse, a cannibalistic monster lives, and stalks all those unlucky enough to enter his lair.

Back In Stock! A clown comes back from the dead to haunt those who took his life during a fatal party mishap.

An electrifying take on the “Son of Sam” murders in NYC during the summer of 1977, centering on the residents of an Italian-American Bronx neighborhood who live in fear and distrust of one another. John Leguizamo, Adrien Brody, Mira Sorvino, Bebe Neuwirth

First time ever on BLU RAY! A homicidal maniac is on the loose in the city and the low-budget film crew of a Troma movie has the power to stop them. Lloyd Kaufman (1999)

There were several masters of animation during Hollywood’s golden era. Of the top two geniuses, one created elaborate fairy tales and ornate feature-length fantasias — the other guy was Tex Avery. He just wanted to make you laugh. After helping develop Porky Pig, Daffy Duck and Bugs Bunny for Warner Bros., Avery moved to MGM in 1941 to create a set of comedy masterpieces that defined a new slapstick style for animation.

Topical horror film about a documentary crew accompanying a group of illegal immigrants crossing the Border, but are captured by a gang of sadistic anti-immigrant radicals in New Mexico. Chris Peckover, 2010.

Starring Anjelica Huston. A young boy stumbles onto a witch convention and must stop them, even after he has been turned into a mouse. Nicolas Roeg (1990)

So it’s small order this week guys as we are all pinching our pennies at this time but if you are in need for a break from all of this know I will be around deep in my basement videostore waiting for you trying to keep the dream alive. Cheers!

An Interesting Week Of New Cinema Hitting The Shelves…

Well we survived the deep freeze, atleast for now, so with my hands thawed out I can once again type the good...

There Are Never Enough Movies For The Videostore…

April has arrived and the cinema also keeps arriving at the old videostore as we truck forward in this world doing our...

Good day my friends. Well Canada Day is upon us and it might be a quiet celebration in 2020 so the option...