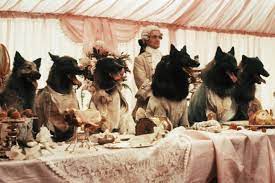 Tis the season dear friends. The season to start grabbing those sweet slices of cinema for yourself or maybe that special friend how would love it for their collection. Anyways some beauties are coming so let’s take a look shall we…

In this cult-favorite documentary, Mark Borchardt, an aspiring filmmaker from a working-class Wisconsin background, is set on finishing his low-budget horror movie, despite a barrage of difficulties. Plagued by lack of cash, unreliable help and numerous personal problems, Mark wants to complete the film to raise funds for a more ambitious drama. With the assistance of his bumbling but loyal friend Mike Schank, Mark struggles to move forward, making for plenty of bittersweet moments.

BACK IN STOCK! Italian horror classic an American writer living in Rome witnesses a murder and grows increasingly obsessed with the incident. He launches his own investigation, heedless of the danger to both himself and his girlfriend. Dario Argento (1970)

A scientist, working with genetics, creates a creature that is capable of transforming back and forth between a giant Death Head moth and a beautiful woman. Peter Cushing, Robert Flemyng, Vernon Sewell, 1968.

In the near future, gas prices have gotten so high that automobiles are an unusable mode of transport. Then vegan teacher Archie (Mike Brune), while working on an engine designed to run on wheat grass, discovers he can get it to work using human blood. He dumps sweet organic grocer Lorraine (Anna Chlumsky) for hot butcher Denise (Katie Rowlett) and all forms of mayhem ensue while Archie fuels his bloodcar. Things get crazier when the government takes an interest in the project.

In the small town of Cherry Falls a psychotic murderer is killing off the virgins of the local high school. Brittany Murphy, Jay Mohr, Michael Biehn, Geoffrey Wright, 2000.

BACK IN STOCK! A privileged man-child arrives at the beautiful and remote coastal cabin of his estranged father, whom he hasn’t seen in 30 years. He quickly discovers that not only is his dad a jerk, he also has a shady past that is rushing to catch up with him.

A village is attacked by deadly monsters living in a mist that has overtaken their town. One man risks his life to find the cause and end the curse that plagues his people. 2020

Lonely teenage genius has two best friends: his remarkable robot and the beautiful girl next door. When tragedy strikes both he rebuilds them with frightening results! Matthew Labyorteaux, Kristy Swanson,Wes Craven, 1986.

A family man whose perfect life is turned into a nightmare of sex and torture when he allows himself to be seduced by two nubile young strangers who show up at his door on a rainy night. Seymour Cassel, Sondra Locke, Colleen Camp, 1977.

A group of heavily armed hijackers board a luxury ocean liner in the South Pacific Ocean to loot it, only to do battle with a series of large-sized, tentacled, man-eating sea creatures who have taken over the ship first. Stephen Sommers (1998)

BACK IN STOCK! In the not-too-distant future against a backdrop of advanced undersea technology, a group of scientists and Navy personnel discover they are in an underwater Alien rip-off. Greg Evigan, Miguel Ferrer, Nia Peeples, Sean S. Cunningham, 1989.

The double feature of dental carnage returns to the shop once again!

In this definitive Spaghetti Western, Franco Nero gives a career-defining performance as Django, a mysterious loner who arrives at a mud-drenched ghost town on the Mexico-US border, ominously dragging a coffin behind him.

Testing his theory that in every man dwells a good and an evil force, the reserved Dr. Jekyll (Fredric March) develops a formula that separates the two, turning him into a violent ruffian named Mr. Hyde. Thinking he has found the answer to one of life’s grandest mysteries, Dr. Jekyll soon realizes he is becoming addicted to his darker self as he unleashes his violent side on earthy dance hall girl Ivy (Miriam Hopkins) and fights Hyde to regain control of his body.

To save his declining business, Chris Cringle, also known as Santa Claus, is forced into a partnership with the U.S. military. Making matters worse, Chris gets locked into a deadly battle of wits against a highly skilled assassin, hired by a precocious 12-year-old, after receiving a lump of coal in his stocking.

After a rival student plagiarizes his screenplay, James is forced into production until sparks fly during an uninvited audition from a masked welder.

BACK IN STOCK! Once an architect, Frank Bannister (Michael J. Fox) now passes himself off as an exorcist of evil spirits. To bolster his facade, he claims his “special” gift is the result of a car accident that killed his wife. But what he does not count on is more people dying in the small town where he lives. As he tries to piece together the supernatural mystery of these killings, he falls in love with the wife (Trini Alvarado) of one of the victims and deals with a crazy FBI agent (Jeffrey Combs).

BACK IN STOCK! Two young boys accidentally release a horde of nasty, pint-sized demons from a hole in a suburban backyard. Now they must overcome a nightmarish hell that literally begins to take over the Earth. Tibor Takács (1987)

The Ginger Snaps Trilogy on BLU RAY all together!

BACK IN STOCK! Radio personalities Larry Abbot (Gene Wilder) and Vickie Pearle (Gilda Radner) are stars of a mystery show. Since they announced their engagement, Larry has been plagued by speech problems and, seeking out an unconventional cure, he returns to his boyhood home, a mansion in the countryside, bringing Vickie along. Larry reunites with numerous family members, including the flamboyant Aunt Kate (Dom DeLuise), but discovers that there are sinister things afoot within the walls of the creepy estate.

A traveling haunted house becomes a nightmarish prison of murder for contestants who agree to participate in a contest to be locked inside overnight.

A trio of explosively stylish critical and commercial triumphs telling the gripping saga of two rival moles who navigate slippery moral choices as they move between the intersecting territories of Hong Kong’s police force and its criminal underworld.

The Masterpiece returns to the shop.

BACK IN STOCK! Legendarily tasteless cult Shot-on-Video horror that features a killer who, upon being diagnosed with AIDS, proceeds to get revenge on the world by attacking people with needles filled with his blood. Drew Godderis, 1994.

Beautiful Gift Box Set Edition! Sixteen-year-old Sarah is given thirteen hours to solve a labyrinth and rescue her baby brother Toby when her wish for him to be taken away is granted by the Goblin King Jareth.

BACK IN STOCK! Hugh Grant stars in Ken Russell’s delirious horror comedy where a Scottish archaeologist uncovers an ancient worm cult, but has he just released the monster himself? Ken Russell (1988)

BACK IN STOCK! Based on the best-selling manga series, the six intensely kinetic Lone Wolf and Cub films elevated chambara to bloody, new heights. Tomisaburo Wakayama.

BACK IN STOCK! Maj. Benson Payne (Damon Wayans) lives, breathes and sleeps war. But after being honorably discharged from the Marines due to a lack of wars, Payne, the natural-born killer, has absolutely no idea how to cope in everyday civilian life. Fortunately, before he completely breaks down, Payne finds his way back into a military capacity at Madison Preparatory School, leading a group of misfit JROTC students who don’t want to be led. Whipping these kids into shape might be his toughest battle yet.

BACK IN STOCK! A teenager who accidentally committed matricide finds himself being hunted together with his girlfriend and mates by his now crazed father. Matt Mitler, Ruth Martinez, Bill Hitchcock, 1985.

Mother of the modern zombie movie, where a group of strangers barricade themselves in a house to survive the night against the hordes of shambling cannibalistic undead overrunning the countryside. George A. Romero (1968)

VIDEOSTORE RECOMMENDED! The limited Series on the true story of how The Godfather got made!

This in-depth look at the 1990 mini-series based on Stephen King’s iconic novel features interviews with many of the cult classic’s key players, including director Tommy Lee Wallace and cast members Seth Green, Richard Thomas, and Tim Curry.

Easily excitable Neal Page (Steve Martin) is somewhat of a control freak. Trying to get home to Chicago to spend Thanksgiving with his wife (Laila Robins) and kids, his flight is rerouted to a distant city in Kansas because of a freak snowstorm, and his sanity begins to fray. Worse yet, he is forced to bunk up with talkative Del Griffith (John Candy), whom he finds extremely annoying. Together they must overcome the insanity of holiday travel to reach their intended destination.

Six criminals with pseudonyms, and each strangers to one another, are hired to carry out a robbery. The heist is ambushed by police and the gang are forced to shoot their way out. At their warehouse rendezvous, the survivors, realising that they were set up, try to find the traitor in their midst.

BACK IN STOCK! In this gory and disturbing thriller assassins use a mind-control device which shunts the consciousness of the victim in a dark recess when taken over. Brandon Cronenberg, 2020.

BAKC IN STOCK! Ultra gory inventive Taiwan-set horror in which a virus turns the infected into monsters propelled by their worst instincts. Rob Jabbaz, 2021.

BACK IN STOCK! An ingeniously engineered slash of thoroughly modern horror, arguably the most important film of the Canadian Tax Shelter era, which charts a social breakdown by tearing through our most intrinsic taboos. David Cronenberg, 1975.

A mentally disturbed man takes residence in a halfway house. His mind gradually slips back into the realm created by his illness, where he replays a key part of his childhood. Ralph Fiennes, Miranda Richardson, Gabriel Byrne, David Cronenberg, 2002.

A lonely hair stylist becomes obsessed with the lives of her clients and descends into murderous madness. Jill Gevargizian, 2020.

When household tensions and a sense of worthlessness overcome Evan, he finds escape when he clings with the orphans of a throw-away society. The runaways hold on to each other like a family until a tragedy tears them apart. Penelope Spheeris (1983)

A high-water mark of digital animation, this prescient vision of a dystopian future is packaged within a dazzling pop-science-fiction love story, making for an urgent fable for our troubled millennium.

BACK IN STOCK! Supernatural horror trilogy follows an evil warlock from the 17th to the 20th century who works to unleash Satan. WARLOCK (Steve Miner 1989) WARLOCK: THE ARMAGEDDON (Anthony Hickox 1993) WARLOCK III: THE END OF INNOCENCE (Eric Freiser 1999)

And there we go! Lots of great gift ideas. The videostore hopes to see you later this week. Cheers!

Good people! On Saturday, Sept. 14th my good friends at The Video Void are presenting a fun double feature screening night to...

And The Year Comes To An End…With Some New Movies Hitting The Shop!

Well the unique year of 2020 is coming to a close and for the most part good I suppose. Anyways the videostore...