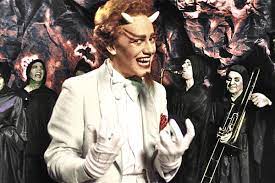 Well kids, it’s another week of cinema gold at the old videostore and we got some interesting titles coming your way. The shop always does it’s best to bring in the WTF is this movie kind of entertainment and the latest shipment is no exception along with some classics getting reissued. Let us take a look shall we…

Typically insane pink eiga masterwork – an infertile woman steals a baby from a couple screwing in the bushes and raises him as her own with her twisted boyfriend. Takahisa Zeze, 1999.

Arriving on a tropical island for a new job, a couple move into a spooky mansion with a evil past and must contend with the spirit of an evil witch looking for revenge. John Saxon, Lynda Day George, Michael Dante, Herb Freed, 1980.

Archaeologists find a strange structure in northern Canada that appears to be thousands of years old. The team members become isolated when their communications fail, and their sanity begins to unravel.

Japanese pink film about a blind girl who falls in love with a ventriloquist but ends up dating the wrong man. Yutaka Ikejima, Daisuke Goto (A Lonely Cow Weeps At Dawn), 2005.

In the small town of Cherry Falls a psychotic murderer is killing off the virgins of the local high school. Brittany Murphy, Jay Mohr, Michael Biehn, Geoffrey Wright, 2000.

A Troma classic gets a high definition makeover! 1986.

When fellow operatives (and childhood friends) Matthew Johnson and Melvin Johnson disappear during an undercover mission in Hong Kong, Cleopatra Jones (Tamara Dobson) travels there to find them.

BACK IN STOCK! The fictional Creepshow comic books come to life in this anthology series of terrifying tales hosted by the silent Creepshow ghoul. TV Series (2019)

BACK IN STOCK! In rural 19th-century France, a mysterious, possibly supernatural menace threatens a small village. A pathologist, comes to town to investigate the danger and exorcise some of his own demons in the process. Boyd Holbrook, Kelly Reilly, Sean Ellis, 2021.

Four beautiful women are foretold of mysterious adventures in which each of them will take advantage of men with their enchanting looks, but they might not survive their escapades.

This incredibly strange and strangely beautiful work of Romanian animation about a Modigliani-esque alien journalist who while travelling a state-of-the-art spacecraft discover its AI has fallen in love with her. 1984.

Upon arriving in a small town where she has inherited a rundown mansion, a famous horror hostess battles an evil uncle, and townspeople who want her burned at the stake. James Signorelli (1988)

A ship sailing in the pre-First Opium War South China Sea is attacked by pirates and five British maidens on board are kidnapped. They are sold to a brothel run by Chao (Hsieh Wang), starting to get trained in sexual techniques for the day when they shall be auctioned. However, one of the attendants, Ko Mei-mei (Lau Wai-Ling) takes pity at the girls’ fate and, with her brother Ko Pao (Elliot Ngok credited as Yueh Hua), begins to secretly instruct the girls in kung fu. Meanwhile, a romantic liaison between Pao and one of the girls, Dawn (Sonja Jeannine) emerges.

A romantic comedy of two piano-playing brothers who find an attractive young singer to give some much needed life to their dying lounge act. Jeff Bridges, Michelle Pfeiffer, Beau Bridges, Steve Kloves, 1989.

The “Citizen Kane” of underground movies! The bizarre and musical tale of a girl who travels to another dimension through the gateway found in her family’s basement. Hervé Villechaize, Susan Tyrrell, Gisele Lindley, Danny Elfman, 1980.

In this butcher’s shop, a young geek addicted to horror films is stripped naked by a pervert zombie, a group of friends is murdered with a machete by a couple of degenerates, and an old successful author is found dead in his mansion, while a pedophile psychopath prowls around.

Directed & written by Chris Alexander. Starring Ali Chappell, Thea Faulds. A young woman (Ali Chappell) tormented by not being able to see her daughter, relieves her misery by stalking and killing women with a straight razor.

In this late period giallo, a detective on a is on the trail of a killer that takes him into a world of sex, drugs, gore and perversions. Leonora Fani, Jeff Blynn, Gianni Dei, Mario Landi, 1979.

BACK IN STOCK! Brazilian horror. Four YouTubers with expertise in supernatural events are seeking recognition from the audience whilst solving the urban legend of the Bathroom Blonde Case. The spirit that haunts the schools’ bathroom in Brazil. Fabrício Bittar (2018)

Four teenagers venture out for a weekend of camping in the British countryside, but it soon becomes clear that they are not alone: an unknown figure is watching them. After a night telling scary stories around the campfire, the teens are attacked.

A lonely 80s high school nerd gets the help of a cool guardian angel from the 60’s in this light fantasy. Lewis Smith, Jason Gedrick, Jane Kaczmarek, Cary Medoway, 1985.

BACK IN STOCK! A homicide detective and an FBI agent team up to find the human host of an alien life-form responsible for turning citizens into homicidal maniacs.

BACK IN STOCK! Desperate to make some money so she can move into a new apartment, college student Samantha Hughes (Jocelin Donahue) takes a mysterious babysitting job. When she arrives at the house, Mr. Ulman (Tom Noonan) mentions a full lunar eclipse and explains there is no child, but that Samantha will be watching his mother instead. After exploring the sinister-seeming house, Samantha soon comes to realize that her employers are hiding a horrifying secret and have plans to use her, dead or alive.

ON BLU RAY! In this Hong Kong horror, an unbalanced craftsman decides to get revenge on two Kung Fu masters in this gruesome tale of bloody retribution. Chung Sun, 1982.

BACK IN STOCK! Nearly a year after a botched job, a hitman takes a new assignment with the promise of a big payoff for three killings. What starts off as an easy task soon unravels, sending the killer into the heart of darkness. Ben Wheatley (of the cult series Ideal).

A piñata begins to kill a group of friends, one by one, as revenge for the torture and savagery humanity has inflicted on his people.

A group of friends must survive a vicious attack of alien zombies using their lowriders.

Manga hero Kekko-Kamen appears in her iconic red mask and boots, and nothing else, to battle the evil headmaster of the nation’s top prep school! 2012

In a small Korean province in 1986, two detectives struggle with the case of multiple young women being found raped and murdered by an unknown culprit. Bong Joon Ho, 2003.

For reasons unknown, the recently deceased are rising from the grave as flesh-hungry zombies. Fleeing from the undead horde, a small group of survivors, including Barbara (Patricia Tallman), Ben (Tony Todd) and Harry (Tom Towles), sequester themselves in a remote farmhouse. With the zombies outside the house multiplying, tensions flare, as the group argues over the best way to escape their increasingly dire situation before they are overrun completely.

BACK IN STOCK! Living alone in the Oregon wilderness, a truffle hunter returns to Portland to find the person who stole his beloved pig.

A group of conspiracy theorists watches a top-secret military base in the desolate Welsh mountains.

Aussie thriller where a truck driver plays a cat-and-mouse game with a mysterious serial killer who uses a young female hitchhiker as bait to lure victims on a desolate Australian highway. Richard Franklin (1981)

In an unnamed banana republic, a trio of female revolutionaries chase after a suitcase full money in the jungles while battling crooks, the military and other revolutionaries. John Ashley, Sid Haig, Eddie Garcia, Eddie Romero, 1974.

A punk rock band kidnaps a business man they believe is a werewolf hiding in plain sight. The group takes the man to a nearby warehouse, where they have one night to prove that their suspicions are true. Kurtis Spieler (2013)

After jerks disrupt Harris and his mother’s movie experience, they start dying one by one, and Harris has to confront his past and question his sanity.

BACK IN STOCK! A small town is terrorized by “The Banana Killer”, which turns out to be the missing link between man and ape. John Landis (1973)

BACK IN STOCK! Starring Bridget Fonda, Jennifer Jason Leigh, a woman advertising for a new roommate finds that something very strange is going on with the tenant who decides to move in. Barbet Schroeder (1992)

When sleazy Paul Snider (Eric Roberts) stumbles upon pretty high school beauty Dorothy Stratten (Mariel Hemingway), he knows she is star material. Paul becomes her manager and husband, and under his guidance Dorothy grows to fame as a Playboy Playmate. But when Dorothy begins pursuing an acting career, the jealous Paul finds himself elbowed out of the picture by more famous men. Dorothy’s career rises as Paul’s mental state declines, leading ultimately to tragedy.

BACK IN STOCK! Young Jason is the only one who doesn’t love The Stuff, and everyone who eats it has started acting really weird… Now Jason must put a stop to The Stuff or face a gooey, gloopy demise. Larry Cohen (1985)

BACK IN STOCK! When Mason (Ice-T), homeless and living on the streets of Seattle, hears about a job as a hunting guide for a group of wealthy clients, he gladly signs on and is taken to a cabin in the middle of a Pacific Northwest forest. There he meets psychiatrist Doc Hawkins (Gary Busey), oil baron John Griffin (John C. McGinley) and Wall Street investor Derek Wolfe (F. Murray Abraham). The next morning, however, Mason is awakened to learn that he’s the prey the men will be hunting.

BACK IN STOCK! A crazy clown stalks and tries to kill three women in a wretched old apartment building on Halloween night.

BACK IN STOCK! STEELCASE edition of the classic!

Starring Peter Cushing. A horror writer stumbles upon a terrible secret, that cats are supernatural creatures who really call the shots. Denis Héroux (1977)

BACK IN STOCK! THE FINAL CUT! A righteous police officer investigates the disappearance of a young girl on an island inhabited by a cult of pagans. Edward Woodward, Christopher Lee, Britt Ekland, Ingrid Pitt.

BACK IN STOCK! Idiosyncratic horror-comedy about a misfit cop investigating a rash of murders of young women in the sleepy town of Snow Hollow. Robert Forster, Jim Cummings, 2020.

And there we go my fellow movie freaks. Lots of interesting stuff hitting the shelves this week. Hope to see you all down later in the week. Cheers!

Coming This Week…more copies of this bad boy hitting the shop!

Hong Kong action. In a kingdom ruled by a young and unpredictable king, the military commander has a secret weapon: a shadow,...

Body Horror Cronenberg Returns This Week To The Shop…

Hey guys, the hot days of summer are upon us and the movies that bring life to the videostore keep coming in...