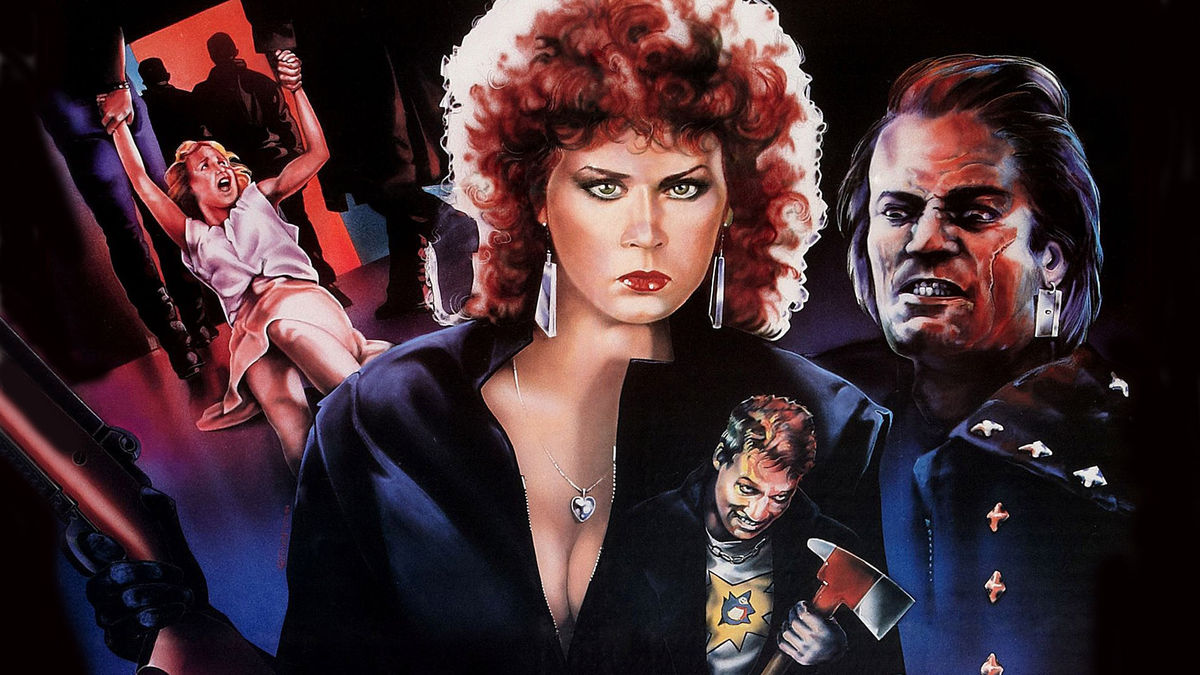 Deep breath everyone…it’s a new year. Are we on the up swing or will the world keep the gravy train of bummer news running fast and hard? Well some things are out of our hands but bringing in sweet cinema to the videostore is one thing that can shield us from such issues. This week the shop is pumped that the Linda Blair cult classic finally comes back in print and on Blu Ray. Savage Streets is pure 80s goodness and one a few titles coming in. Shall we look at the list now? Why not…

Michael Radford’s dark adaptation of Orwell’s classic novel about a man who tries to rebel in a dystopian society by falling in love. John Hurt, Richard Burton, 1984.

Violent Blaxploitation trash with a misleading title about a group of extremist Black militants who decide to clean up their streets of the predatory white vice merchants! Lee Frost, 1975.

One morning, a young man wakes to find that a small, disgusting creature has attached itself to the base of his brain stem. The creature gives him a euphoric state of happiness but demands human victims in return. Frank Henenlotter (1988)

Authoritative edition of The Cabinet of Dr. Caligari is a 4K restoration scanned from the (mostly) preserved camera negative at the German Federal Film Archive.

When mild-mannered Martin Harvey (Martin Short) finds out that he has inherited a vintage yacht, he decides to take his family on a Caribbean vacation to retrieve the vessel. Upon arriving on a small island and realizing that the ship is in rough shape, Martin and his family end up with more than they bargained for as the roguish Captain Ron (Kurt Russell) signs on to sail the boat to Miami. It doesn’t take long before Ron’s anything-goes antics get the Harveys into plenty of trouble.

Tromaville’s honour students are transformed into rampaging freaks when toxic waste leaks into the water supply.

In 1942, young Traudl Junge (Alexandra Maria Lara) lands her dream job — secretary to Adolf Hitler (Bruno Ganz) at the peak of his power. Three years later, Hitler’s empire is now his underground bunker. The real-life Traudl narrates Hitler’s final days as he rages against imagined betrayers and barks orders to phantom armies, while his mistress, Eva Braun (Juliane Köhler), clucks over his emotional distance, and other infamous Nazis prepare for the end.

From her pleasure at an all-girl school in England to hungers in the exotic underground of Hong Kong, Felicity finds herself ultimately delighted. John D. Lamond (1978)

Gwendoline arrives in China in a box, she’s on a mission to find her father, who was last seen in the Land of the Yik Yak. They confront the evil Cheops in an attempt to find Gwen’s lost father. Just Jaeckin (1984)

Scandalous exploitation film largely made up of real and fake travelogue material of Hollywood’s Africa but best known for its over the top climax involving an indigenous cult who worship and sacrifices victims to their gorilla gods. 1930.

Starring Michael Keaton, after he’s laid off, a husband switches roles with his wife. She returns to the workforce and he becomes a stay-at-home dad – a job he has no clue how to do. Stan Dragoti (1983)

Spanish horror a doctor and his wife move to a small inhospitable coastal village where he plans to start a practice only to discover that undead demon-worshiping Templar Knights haunt the place. Amando de Ossorio (1975)

Made over 7 years, Paris Is Burning offers an intimate portrait of rival fashion “houses,” from fierce contests for trophies to house mothers offering sustenance in a world rampant with homophobia, transphobia, racism, AIDS, and poverty. Dorian Corey

In Arizona, an introverted and insightful teenager, Mark Hunter (Christian Slater), finds an outlet for his viewpoints through a shortwave radio. Broadcasting as “Hard Harry,” Hunter uses his pirate radio show to rant against the injustices and hypocrisies taking place in the area, and in society in general. Hunter conceals his off-air identity, but a determined student (Samantha Mathis) discovers the truth, while Principal Creswood (Annie Ross) seeks to shut down Hunter once and for all.

Based on the popular Marvel comic book, this film begins with Frank Castle (Dolph Lundgren) as a respected police officer dedicated to eradicating the Mafia’s influence — that is, until the mob responds with a lethal car bomb that decimates Castle’s family. Now, filled with rage and presumed dead from the horrific explosion, Castle takes to the city’s underground sewer tunnels to bring his own brutal brand of vigilante justice to the streets and wreak vengeance on those who killed his family.

A platoon of South Korean soldiers falls victim to a curse while searching the jungle for the source of a mysterious distress call.

Gordie Boggs (David Arquette) and Sean Dawkins (Scott Caan) are best friends who operate a sewage truck and idolize pro wrestler Jimmy King (Oliver Platt). After Diamond Dallas Page (Diamond Dallas Page) dethrones their hero, Gordie and Sean embark on a mission to help King get his title back. When they finally track him down, however, they discover that King is not too keen on recapturing his former glory. Can the boys find a way to motivate the faded champ?

All 6 Rocky flicks in one sweet Blu Ray pack. Always there for you incase inspirational cinema is required.

In this classy cult film a teenage vigilante seeks revenge on a gang of violent thugs who raped her handicapped sister and killed her best friend. Linda Blair, Robert Dryer, John Vernon, 1984.

Triple feature Blu Ray! 2 fun movies and that 3rd one we all kind of forget about.

When the son of a gun-wielding woman is murdered by neo-Nazi surfers in a post-apocalyptic future, his mother hunts them down to extract her bloodthirsty revenge

Teenager Melissa moves into a small town filled with racial prejudice and bullying and each time she meets up with one of the boys in town, they end up murdered – but who is the killer? Jim Sotos (1983)

A French couple staying in a rambling country estate in Romania are terrorized by an unknown menace in this claustrophobic, pitch-perfect exercise in horror. David Moreau, Xavier Palud, 2006.

4K restored version of beloved cult film about the natives of a small isolated town who defend themselves against strange underground creatures which are killing them one by one. Kevin Bacon, Fred Ward, Michael Gross, Reba McEntire, 1990.

In this cult favorite road film, a mechanic (Dennis Wilson) and a driver (James Taylor) live only to race and maintain their 1955 Chevy. Heading east from California with no particular agenda, they give a girl (Laurie Bird) a ride, and en route she incites jealousy between the men by sleeping with them both. Meanwhile, the trio encounters an overbearing GTO driver (Warren Oates) who agrees to race them to New York, each side putting at stake their most prized possession: their car.

Vampire housemates (Jemaine Clement, Taika Waititi, Jonathan Brugh) try to cope with the complexities of modern life and show a newly turned hipster (Cori Gonzalez-Macuer) some of the perks of being undead.

Failing in his efforts to find his beloved owner (Zsófia Psotta), an abandoned dog eventually joins a canine revolt against their human abusers.

Idiosyncratic horror-comedy about a misfit cop investigating a rash of murders of young women in the sleepy town of Snow Hollow. Robert Forster, Jim Cummings, 2020.

And there we have it guys..the first shipment of 2021. Hopefully manymore to follow with more sweet titles as we maybe get closer and closer to being able hug our fellow film nerd friends again. Cheers!

Tales from The Lobby Video Series

Twas the night of the Tree Beast from House of Heathens on Vimeo. Tales from the Lobby: "Shades of...

Another Week Of Cinema Comes Into The Videostore…

So Many Movies To Explore From All Dimensions…

Summer is half over in the bizarre year that is and not much in the world is consistant except the videostore and...