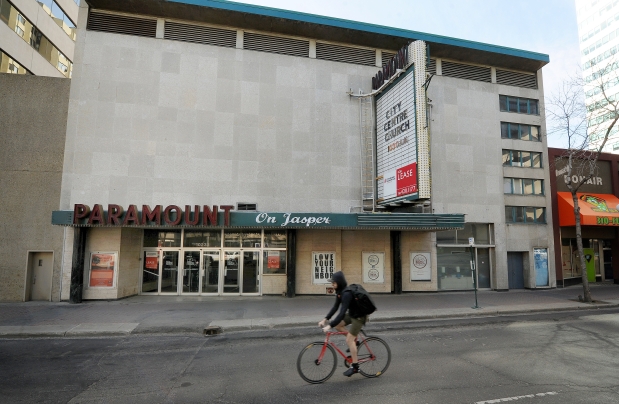 It’s still cold outside. As I sit in the shop today I’ll probably be saying this for the next 161 straight days every morning until it’s finally not. Ahh…Edmonton, Canada. I know what city I live in and will continuely be an old grump when the weather feels like today. But thinking about the city also makes me remember some great things and in life you can only experience a “first” just once. And when it comes to being a movie nerd we never forget that first magical trip to the movie theatre. For me it was the Paramount Movie Theatre on Jasper Ave.

As a young child having your parents take you to a movie for the first time is a big deal. Generally movie theatres are big buildings regardless but when you are 5 or 6 they look enourmous and overwhelming. And the Paramount was no exception. What you end up seeing on the screen is not really important, it’s experience of going for the first time that always stays with you. Like having sex for the first time whether it was good or bad is something you might remember years later BUT you will never forget WHO you were with. Yup, I just compared a movie theatre to a person you slept with. Whatever…you get the idea. Now, where was I…

It was 1982 and my dad was gonna give me my first taste of the sweet world of cinema. Until then I had only seen movies on our 200 pound tube TV so this was gonna a change for sure. The thing about the Paramount Theatre was that it was a self contained movie building. Not part of a mall, not a multiplex, just one ticket booth, one spacious lobby area, and ofcourse the classic smell of hot and buttery popcorn. Maybe I’m crazy but I think popcorn tasted better in those traditional theatres. I’m not saying they were made with more love but then again you never know?

Now as my father bought our tickets, got the popcorn, candy, and soda we eventually made our way through those magical doors and there I entered this beautiful world that took my childhood breath away. Rows and rows of giant padded seats all waiting to be sat in that all looked towards these towering curtains covering up what would a window to another world we would soon enter.

Now when the curtains opened and the lights went down I could feel the excitement come over me as we started seeing commercials for upcoming movies. Back then, to the best of my memory, there were not 21 phone, car, bank, and insurrance ads that played before the damn movie. We know live in a world when it says the movie starts at 9:30pm you know you have till 9:52pm. I will always love my movie trailers though. I think everyone that played I asked my dad if we could go see it. Oh father, look what you have created. To this day I hate missing the trailers. It’s literally the foreplay of cinema.

That’s right, it was 1982 and the movie he picked was STAR TREK II: WRATH OF KHAN! Well holy hell was that a ride for me. The excitement of space, adventure, Shatner’s overacting, Shatner’s underacting, Shatner’s..umm Shatner. A movie that had the audience cheering, gasping at the evil Khan, and ultimately me, along with many in there, crying like a child at the death of Spock. Now, in fairness, I was a child so I had an excuse. As the movie ended my dad explained to me that Spock would be okay because there would be a sequel. Ofcourse trying to comprehend what the hell he was talking about at that age was hard to understand.

Leaving the theatre that day I felt fullfilled with happiness. Little did my dad know he created something in me that to this day has never left. And that beautiful building on Jasper Ave known as the Paramount theatre was a huge part of it. We would go to other theatres in other cities over the years but whenever I could make it back to a screening in that particular movie house I would.

The one thing I will always remember from that theatre is how damn comfortable those seats were. Honest to god they felt like big feather pillows on the back of my head as you looked up to the silver screen. I know in today’s world we have freaking beds in cinemas or close to it but a theatre back then to be remembered for cushy seats is impressive, atleast to me anyways.

More screen adventures took place in this magical building such as going to see the double feature of Star Wars and Empire in the spring of ’83 to get us excited for the May release of Return Of The Jedi. I remember after the double feature ended they showed the trailer for Jedi and I was bouncing like a beachball in my seat. Sadly next month as I sit to watch Episode IX I’ll probably just be in my seat like a bag of wet cement. How times have changed. On a side note we ended up seeing Jedi in a different theatre that year. Too bad really. Paramount was probably sold out I’m guessing.

Cut to the mid 90s and the old theatre was still kicking even if more cinemas were opening all around the city spreading people out and making going to downtown less appealing. But the old Paramount still had a few tricks up it’s sleeve that theatres in malls were not offering at the time. The classic MIGHNIGHT SCREENINGS. And what a grand batch of cult classic and retro goodness they would bring us. Every Saturday night they would.

We would try and make atleast one screening a month. Have some predrinks, head downtown and hunker down in the beauty of our movie church and revisit some classics on the big screen. It’s a common practise today in many theaters but back then catching flicks like Ghosterbusters, Heavy Metal, Reservoir Dogs, and some Monty Python in theatres was rare. Let alone the fact they were all on actual 35mm film. No digital. We got all the cigarette burn marks, the faded colours, and pure vintage feeling of watching them like when they originally came out.

And since we are talking about midnight screenings in downtown Edmonton back before the city tried to polish up the area at times it did feel like an old 42nd street movie houses from New York in the 70s. Some were just in that theatre for a place to sleep. A place to drink. A place to do drugs. Or even a place to have sex. But honestly it added to the vibe of these screenings.

Sadly though the end was near for the old girl. As more multiplexes kept opening in the city with better sound, picture, more screens, and vast parking the Paramount theatre could no longer compete and downtown Edmonton was becoming a ghost town for businesses during that time.

The final movie I caught at the Paramount was Ridley Scott’s Gladitor. Seeing a flick like that in a theatre like that felt fitting. Big, grandiose, historical, epic, and a legacy of great moments in cinema all shown there. Were we not entertained?!

Shortly after she closed the Paramount was later turned into a church of all things. Yes, the irony that in my life and world the movie theatre is literally a church to me and then became one was something else. Oh well, atleast all those Christians had the softest seats to talk to God.

A few years later a locally produced Hell Haunt took over called Deadmonton that would use the massive and creepy structure inside to spook people every Halloween season. Now we were getting back to something special.

In 2016 I was lucky enough to get to revisit the old girl one more time. My friends were shooting a short film in the building and asked me to be a part of it by taking on a role in it. If nothing else it was a chance to revist to building and find out if those seats were as soft as I remember?

While everyone was busy preparing for filming that day I just quietly walked down the ailse of the theatre and tried to remember my favourite seat that I used to love sitting in back in my younger years. When I finally settled on a seat I sat down, leaned back, and rested my head on that chair. And yes…it was just as soft as I remember. All those memories came flooding back to me on that afternoon. I closed my eyes and smelled the popcorn, heard the buzz of the audience once again as the lights would dim, the curtains would open, and sound of 35 or 70mm film would light up on the screen from the projection booth above.

Last I heard the building will be taken down and probably turned into a parking lot. I get it. Nothing lasts forever. Time and things move on. I guess all we can do is remember. Rememeber the good times. And for me that theatre created the person that sits here now typing this. Like any relationship in life that did not last forever it’s okay. You got to experience it atleast. You felt those good vibes and if you still can picture them every now and then in your mind you can still smile. So on this cold Sunday afternoon from the videostore I remember you Paramount. Thanks for the memories. Cheers!

So instead of writing some crazy shit dealing with the current world affairs I figure it's my job to talk about other...

Answer: The Lobby DVD Shop. Known for being the last video store in Edmonton, The Lobby was born from...

It’s 2020! Time To Restock The Shelves With Movie Magic!

Well hopefully we all survived the holiday season. It's a new year, a new decade, and the videostore continues to live in...