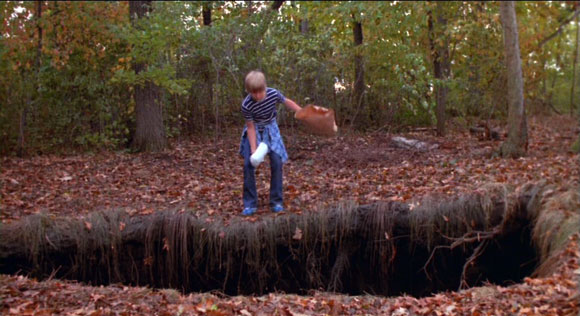 A new month keeps bringing us more titles to hit the shelves of the old videostore. Some random goodness shows up this week so let’s take a look…

A single mother gives her son a much sought-after doll for his birthday, only to discover that it is possessed by the soul of a serial killer

Horror classic where a young couple travelling cross-country find themselves stranded in the small town of Gatlin, where they meet a mysterious religious cult of children. Fritz Kiersch (1984)

An ageing countess uses the blood of virgins to help her regain the beauty she once had. Ingrid Pitt, Nigel Green, Sandor Elès, Peter Sasdy, 1971.

Documentary on the making of b-movie sci-fi cult classic “The Creeping Terror” and its con-man director Art “A.J.” Nelson/Vic Savage. Portrait of a talentless artist who ultimately succumbs to his own self-destructive behaviour. Pete Schuermann (2014)

A hospital psychiatrist’s own sanity is pushed to the edge when a frightened amnesiac patient insists that he has died and brought something terrible back from the other side. Billy Senese (2018)

Italian action where two 9th Century Viking children, separated since their early childhood with one raised by the British and the other by Vikings, meet after nearly 20 years as rivals. Mario Bava (1961)

Starring Louis Gossett, Jr., a nightclub hypnosis act possesses a man with the spirit of a violent gangster from the 1940s, the murderous J.D., who launches a revenge campaign against those who had done ‘him’ wrong all those years ago. Arthur Marks (1976)

The tales behind the creation of celebrated 1984 horror classic CREEPSHOW, with rare behind-the-scenes footage and photographs, and interviews with George A. Romero, Tom Savini, Adrienne Barbeau, Tom Atkins and many others. Michael Felsher (2016)

Violent satirical tale of two groups of outsiders who make war on each other, set to a soundtrack of retro karaoke hits. Japan, Tetsuo Shinohara, 2003.

For those of you who thought that A Serbian Film was all sizzle and no steak here’s a truly harrowing depiction of Serbia in the grips of a massive culture & moral decline. Mladen Djordjevic, 2010.

Italian-American actor and nightclub singer Duke Mitchell wrote, produced, directed and starred in this homemade answer to THE GODFATHER, self-financed with earnings from his career as the self-proclaimed “Mr. Palm Springs.”

A mentally unstable elderly woman, recently released from a mental asylum, proceeds to slaughter all the guests staying at her motel. Jim McCullough Sr. (1983)

When flesh-eating piranhas are accidentally released into a summer resort’s rivers, the guests become their next meal. Directed by Joe Dante and written by John Sayles. Barbara Steele, Kevin McCarthy, 1978.

The Freeling family have a new house, but their troubles with supernatural forces don’t seem to be over. JoBeth Williams, Craig T. Nelson, Heather O’Rourke, 1986.

Carol Anne is staying with her aunt in a highrise building, and the supernatural forces that have haunted her previously follow her there. Heather O’Rourke, Tom Skerritt, Nancy Allen, 1988.

Starring Michael Caine as a seedy writer of sleazy pulp novels is recruited by a quirky, reclusive ex-actor to help him write his biography at his house in Malta. Mike Hodges (1972)

Rare b-movie about punks who attempt to stage a revolution by killing all the cops in a small town while vacationing there and are fought back by local rednecks. Sandra Bogan, Stephen Fiachi, Raymond Fusci, Stanley Lewis, 1990.

Giallo horror classic where An American writer in Rome is stalked by a serial killer bent on harassing him while killing all people associated with his work on his latest book. Dario Argento (1982)

The film on the long running metal music festival.

A flashy pimp wants to be number one, but with the police, the D.A., fellow pimps and a tough-talking social worker on his tail, can a man as arrogant and amoral as Willie D avoid a downfall? Gilbert Moses (1974)

Adult Swim live action workplace comedy about Gary, an associate demon, as he attempts to capture souls on earth in order to climb the corporate ladder of the underworld but he may be too stupid, lazy and kind-hearted to realize his dreams of promotion.

Italian horror loosely based on Edgar Allan Poe’s classic tale “The Black Cat”, it weaves the key motifs from Poe’s gothic yarn into one of the most sensual films from the Golden era of giallo. Sergio Martino (1972)

For a group of young friends, a weekend in the wilderness turns into a battle of life and death when one of them turns up dead. Hunted by a bloodthirsty maniacs, the self-styled Zero Boys must now play their war games for real. Nico Mastorakis (1986)

And there are the jams coming in this week. Maybe one or two caught your eye. And yes, this is a random pic of Evil Superman from Part 3 pouring booze because why not. Cheers everyone!

Another Week Of Cinema Comes Into The Shop As A Legend Has Left Us..

While it's always a treat to post the new movie list this week it feels bittersweet because of the great Ennio Morricone...

Another week and more movies keep on rolling in to the shop! Detective...

Last shipment of movies coming into the shop until Christmas so take advantage for those last minute gifts. Let use dive into...