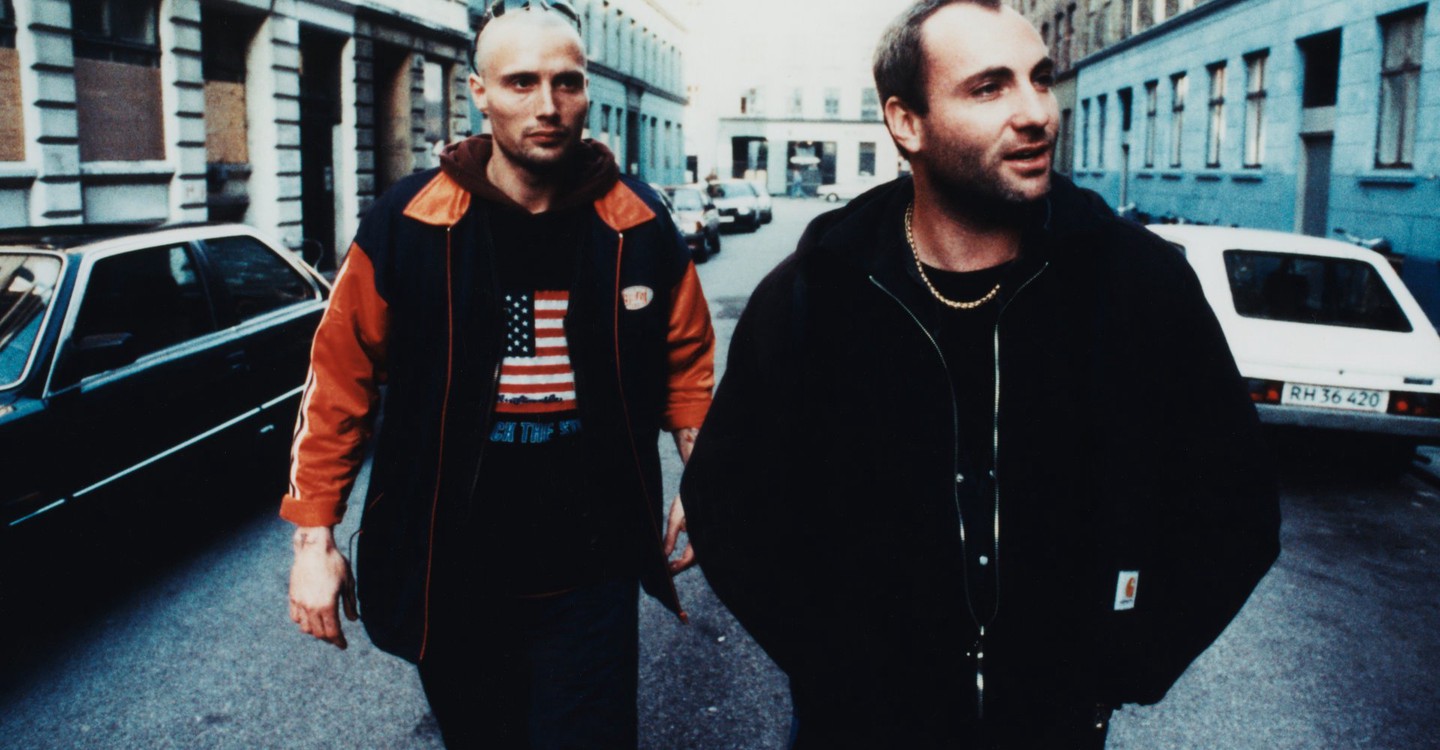 We all survived Halloween but as we all know the videostore will always keep bringing in the fine treats, new and old, well after the holiday. So let’s take a look at this week’s new selection of goodies shall we?

Always a good watch as the autumn weather rolls in, well, atleast part 1, so back in the stock the double feature of The Conjuring because why not?

Back In Stock! This little gem has become quite the popular title in the shop. And why not? The cover has a great retro design. The plot is ridiculious. And using a “Re-Animator” type of serum to bring these donuts alive? Brilliant. And much love for the pratical effects.

Back In Stock! Turkish horror film where a squad of unsuspecting cops goes through a trapdoor to Hell when they stumble upon a Black Mass in an abandoned building. Can Evrenol (2015)

A documentary about police brutality that follows a DJ beat up by off duty DEA agents, a man arrested for filming a police officer, and many others as they fight for justice for their loved ones.

As always thank you Scream Factory for finally giving this bad boy much deserved love. Remake of the 1958 sci-fi horror classic about a deadly blob from another planet which consumes everything in its path. Teenagers attempt without success to warn the townspeople, who refuse to take them seriously. Chuck Russell (1988)

Back In Stock for the Gorehounds as always! Innovative horror film told from to POV cameras – one the kidnapped victims and the other the vicious snuff film producers. Jin Won Kim

Back In Stock Steve De Jarnett’s cult classic returns! In 2017, a successful businessman travels to the ends of the earth to find that the perfect woman is always under his nose. He hires a sexy renegade tracker to find an exact duplicate of his android wife.

Back In Stock! A set of the mediocre to utter shit Crow sequels.

After Elm Street Wes Craven hit us with this bad boy. Everyone always remembers the “basketball” scene. After his friend is killed by her abusive father, the new kid in town attempts to save her by implanting robotic microchips into her brain.

Sandra is approached by a documentary filmmaker about being in a project dealing with “conquering fear”. What she doesn’t know is that he has been stalking her and is hiding a disturbing truth.

Back In Stock! Such a fun time at the movies! Venomous spiders get exposed to a noxious chemical that causes them to grow to monumental proportions.

Back In Stock! Upon arriving in a small town where she has inherited a rundown mansion, a famous horror hostess battles an evil uncle, and townspeople who want her burned at the stake. James Signorelli (1988)

Back In Stock! Georges Franju’s influential horror film about a brilliant, obsessive doctor who attempts a radical plastic surgery to restore the beauty of his daughter’s disfigured countenance—at a horrifying price. Edith Scob, Pierre Brasseur, 1960.

Back In Stock! No videostore is complete without it. Fact.

A noted professor and his dim-witted apprentice fall prey to their inquiring vampires, while on the trail of the ominous damsel in distress. Roman Polanski (1967)

Back In Stock! The 20th Anniversary Blu Ray Steelcase of the classic!

Back In Stock! The Canadian cult classic horror movie along with it’s sequel!

Back In Stock! Two death-obsessed sisters, outcasts in their suburban neighborhood, must deal with the tragic consequences when one of them is bitten by a deadly werewolf. Emily Perkins, Katharine Isabelle, Kris Lemche, 2000.

Back In Stock! Jean Rollin abandons vampires for zombies in this film of a pesticide that alters rural townsfolk into slavering, gut-munching undead. Brigitte Lahaie, 1978.

Back IN Stock! In their directing debut, the “Vicious Brothers”, a pair of horror film fans, stir ghost-hunting to horrifying heights. No set or CGI necessary. 2010.

Back In Stock! The power of Gymkata continues to rock the world! An American gymnast travels to a foreign country to compete in a deadly game not won by anyone other than a native in more than 900 years.

A mother and her 8 year old son struggle to survive in a bomb shelter after an unnamed apocalypse. Mike Lombardo (2017)

Italian horror. A group of environmentalists arrives at a faraway tropical delta where toxic waste is being dumped. However the water also hides a giant crocodile. The corrupt local officials don’t help much either. Fabrizio De Angelis (1989)    Limited Edition [Only 4,000 units with an Exclusive Slip Case and Bonus Disc containing KILLER CROCODILE 2!]

American underground new wave masterpiece where invisible aliens in a tiny flying saucer come to Earth looking for heroin. They land on top of a New York apartment and find that absorbing humans during orgasm is better then heroin. Slava Tsukerman (1982)

Behind the scenes chronicle of how clash of vision, bad creative decisions, lack of interest and really bad weather plagued the disastrous production of the infamous 1996 remake of The Island of Dr. Moreau.

Back In Stock! The 1990 remake directed by Tom Savini and starring Tony “Candyman” Todd comes back to the shop on Blu Ray!

Back In Stock! Another hidden gem from the early 80s slasher genre with the simple question… Who’s been decapitating the innocent girls at a local night school?

Back In Stock! An evil ninja attempts to avenge his death from beyond the grave, by possessing an innocent woman’s body. Sam Firstenberg (1984)

Back In Stock! Based on the Man of Action/Image Comics original graphic novel about a police officer who can’t be stopped by death so he returns to the streets time and time again to fight crime. Shawn Crahan (2016)

Back In Stock! Cult horror comedy where a young boy living in 1950s suburbia suspects his parents are cannibalistic murderers. Bob Balaban (1989)

Limited Steel Case Edition Run! Starring Andy Samberg. When it becomes clear that his solo album is a failure, a former boy band member does everything in his power to maintain his celebrity status.

Been wanting a copy of Witches Of Eastwick in the shop for awhile on Blu Ray. Only available in this double feature edition so Pactical Magic is coming too.

The amazing, gritty as all hell, crime trilogy returns to the shop! Love this series of films!

Back In Stock! Alex Cox’s singular sci-fi comedy stars the always captivating Harry Dean Stanton as a weathered repo man in desolate downtown Los Angeles, and Emilio Estevez as the nihilistic middle-class punk he takes under his wing.

Back In Stock! A tongue-in-cheek slasher about a low-budget film crew going to a high school that was the scene of some murders five years prior to make a exploitation movie about the events only to start getting brutally killed themselves.

The ultimate party movie returns to the shop! All hail Riki!

A truck driver plays a cat-and-mouse game with a mysterious serial killer on a desolate Australian highway. Richard Franklin (1981)

Back In Stock!Terrifying and darkly comic Hollywood debut of Roman Polanski is a wildly entertaining nightmare about a young pregnant woman who believes there is a satanic plot against her. Mia Farrow, John Cassavetes, Ruth Gordon. 1968.

On the surface, Joan Mitchell has it all – family, friends, and a beautiful home equipped with all the latest appliances. But when a neighbour educates her on the practice of witchcraft, Joan embarks upon a dark path. George A. Romero (1972)

Four teenagers on a road trip decide to take a detour and find themselves at haunted house Halloween scream park deep in the woods of southern Kentucky, where the torture and gore begins.

Story of a gay serial killer who murders young boys so he can serve them as dinner to his circle of fellow cannibals. Ulli Lommel, 1973

A group of teenagers get into a car crash in the Texas woods on prom night, and then wander into an old farmhouse that is home to Leatherface and his insane family of cannibalistic psychopaths. Kim Henkel (1994)

Japanese horror. A deadly virus outbreak is turning the people of Japan into flesh-eating zombies. The government intervenes, trying to separate the survivors from the infected.

A man who abandoned his family now risks everything to find his missing daughter, including exposing the secret that he is becoming invisible.

A male prison escapee heads for his hidden loot electronically attached to a female prisoner.

An awkward seventh grader struggles to cope with inattentive parents, snobbish classmates, a smart older brother, an attractive younger sister and her own insecurities in suburban New Jersey.

A high school science nerd gains telekinetic powers after a laboratory accident and uses them for revenge upon bullies. Scott Baio, Willie Aames, Scatman Crothers, Heather Thomas, Robert J. Rosenthal. And for good measure the sequel that no one remembers.

And that will be this week’s haul of cinema. Also don’t forget our latest Nerd Shits are here and going fast. They are a limited run so get them while you can. As always thanks for reading. And remember the videostore loves you. Cheers!

Tis The Season To Get More Movies…

The days keep on rolling in the holiday season which means the the videostore is trying to keep up with great cult...

For The Love Of Filmmaking…GO SEE THIS MOVIE!

Every now and then a movie comes along that takes you completely by surprise and you can not help but tell your...

Big Week Of Goodness Coming To The Videostore!

Another fabulous week of sweet and ridiculous cinema comes crashing into the shop. From Nic Cage doing Nic Cage things to Billy...